Much of the controversy surrounding a possible November election by mail centers on the Post Office. Does it have the capacity to handle and can it deliver ballots on time and securely? One D.C. think tank has looked into the issue in detail. The associate fellow for transportation and infrastructure at R Street, Nick Zaiac, joined Federal...

Much of the controversy surrounding a possible November election by mail centers on the Post Office. Does it have the capacity to handle and can it deliver ballots on time and securely? One D.C. think tank has looked into the issue in detail. The associate fellow for transportation and infrastructure at R Street, Nick Zaiac, joined Federal Drive with Tom Temin to share what the organization found.

Tom Temin: Mr. Zaiac, good to have you on.

Nick Zaiac: Thanks for having me.

Tom Temin: So, you looked at the Postal Service for this purpose, is that correct?

Tom Temin: And your conclusion was that – ?

Nick Zaiac: That it absolutely does. It has the capacity, it has the manpower, it has the oversight capacity, and it has a record of moving government documents successfully for generations.

Tom Temin: I think a lot of people you know, we’re worried at least some people are worried that, because the postal union has endorsed Joe Biden, would Republican ballots get delivered properly? Or would Democratic ballots be duplicated in some way and over delivered? I mean, that’s an issue that people are at least asking about. It does, in some sense impugn the integrity of the delivery system. But what was your finding there?

Nick Zaiac: My finding is that the Postal Service’s oversight bodies certainly prosecute plenty of people who divert mail, and they conduct audits and checks whether workers are doing their job such that it would be very difficult to divert ballots at any time in a systematic way that benefits any political party. And if someone does, the person will be captured, prosecuted, and they’re – the oversight mechanisms in place for preventing standard everyday mail diversion are the same ones that would prevent someone from diverting mail now in the year like this.

Tom Temin: But it would be the Postal Service delivering the ballots in the same manner then as it delivers all the other mail daily.

Nick Zaiac: Absolutely, and all these ballots need to be is as successful as other mail or at least other government mail. But ballots do get extra measures and security and expedited handling such that they will be able to move through the system even more expediently than, say, jury notices.

Tom Temin: And of course, they could always attach the ballots to Bed Bath and Beyond flyers, and then there’s be no problem getting them everywhere they had to go.

Nick Zaiac: Absolutely. Ad mail’s in everyone’s inbox every day, and we certainly know that it successfully makes it out to people. Early returns from the states that have engaged in vote-by-mail have not shown lower turnout or low return rates really at all.

Tom Temin: And what about the capacity, you know, the handling capacity, the processing and the delivery capacity? My sense is that it wouldn’t be that big a deal, actually.

Nick Zaiac: That’s absolutely true. There’s very little or few constraints that come from the processing capacity, the decline in letter mail over the last say 10 years, 20 years if you’re being more pessimistic, has left a gap of hundreds of millions of letters that are no longer being delivered that were being delivered only a few short years ago. All those needs are still there, or almost all those plans are still there. All that capacity still there, the Postal Service still has 500-600,000 employees moving now. That hasn’t changed. But constraints are really things that come from the virus – localized labor shortages, not systematic labor shortages.

Tom Temin: We’re speaking with Nick Zaiac, he’s associate fellow for transportation and infrastructure at R Street. And of course, the whole idea of a mail-in election is sparked by the pandemic and the COVID and all of this, and that is affecting the Postal Service to some degree also. So how would they overcome that particular challenge?

Nick Zaiac: The biggest challenge the Postal Service is going to face is getting whatever excess workers capacity that it has into the places that are facing outbreaks and they’re going to cause the mail to slow down. Making sure that the extra postal workers are there, making sure that there are plans in place to be move ballots to other places for processing so they can get into the hands of the election officials quickly. That’s the one thing that the postal service can’t control all that well. They localized outbreak. The same thing is keeping town clerks and things like that out of their offices from counting ballots are going to keep postal workers from doing their rounds. And the postal service can only control and have extra people in certain places. That is a real risk. There will be delayed ballots. The question is, how can the Postal Service minimize that and they have plenty of plans in place for when natural disasters strike, when other disruptions cause localized issues, that they’re well prepared for this kind of phenomenon, even if it’s not caused by pandemic, it’s caused by weather.

Tom Temin: And of course, over the years, we’ve seen especially at Christmas time when there’s a lot of packages anyway being delivered, there have been some security issues for some postal workers, where they’re delivering at night and it’s dark early in the winter and so on. And they have been physically robbed or attacked in some manner. Is that an issue when people know that there’s ballots aboard?

Nick Zaiac: Potentially, but ballots also aren’t worth anything to anyone who’s trying to resell it. So on some level, sure, but there are certainly, if postal workers are being robbed, there are people who will seek out and punish the people who are doing that. And they’re not going to get much value out of it. And should there be some kind of issue or people are afraid of that most municipalities are offering drop boxes for people to bring their ballots back in without it touching the Postal Service. So all the Postal Service has to do is get the ballots out to people. No one’s going to rob people for unfilled-out ballots. So the risk of this is fairly minimal. And there are ways to get around this should people actually be concerned. I highly encourage people to drop off their ballots at these drop boxes if they are afraid that they will be disenfranchised by the Postal Service or a criminal robbing the Postal Service.

Tom Temin: Any other challenges that they might encounter?

Nick Zaiac: There could be issues with crush loading of certain facilities. That’s unlikely, but the biggest issue is going to be COVID-related labor shortages. And that’s something that will likely not be a huge problem, especially given that postal workers were frontline employees earlier this year. So if anyone’s returned it’s going to be postal workers.

Tom Temin: Nick Zaiac is associate fellow for transportation and infrastructure at R Street. Thanks so much for joining me.

Nick Zaiac: Thanks for having me.

Tom Temin: We’ll post this interview along with a link to his report at FederalNewsNetwork.com/FederalDrive. Subscribe to the Federal Drive at Apple Podcasts or Podcastone. 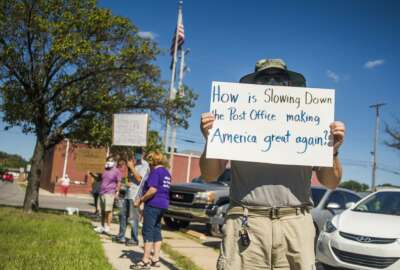 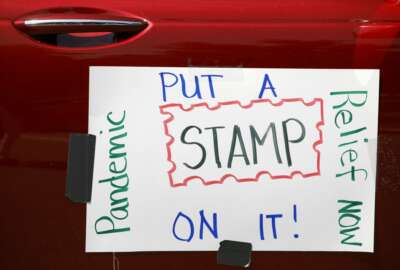