In a contentious House Oversight and Reform Committee hearing, DeJoy also blamed the agency’s serious financial problems on Congress for failing to pass postal reform legislation after more than a decade of net financial losses.

In a contentious House Oversight and Reform Committee hearing, DeJoy also blamed the agency’s serious financial problems on Congress for failing to pass postal reform legislation after more than a decade of net financial losses.

DeJoy said his plan to cut transportation costs stemmed from a USPS inspector general report released the same week he took office in June — the latest in a series of IG reports warning that the agency’s delivery network costs run too high to justify with declining mail volumes.

To members of the committee critical of his plan to keep mail processing and mail delivery running on time, or wary the agency’s ability to deliver a surge in mail-in ballots this November, DeJoy said he was surprised by the “lack of attention” Congress has paid to the Postal Service’s financial condition over the past 10 years.

After recently cutting 2,900 fewer late trips and 1,600 extra trips per day, DeJoy said USPS has seen a 70% reduction in these costs over the past four weeks.

However, in prepared remarks, DeJoy acknowledged that these changes “did expose a need to realign some of our processing and scheduling that caused mail to miss the scheduled transportation, and has temporarily impacted mail and package service performance.”

“Our recovery process is taking too long. This should have been resolved in a few days and it’s not. There are a lot of things impacting our service – this is one of them. We should have cleared it up quicker and I think we have a focus on it now and it will recover quite rapidly going forward,” DeJoy told the committee.

USPS data released by the committee on Saturday showed more than an 8% decrease in on-time first-class mail delivery, as well as similar declines for marketing mail and periodicals. However, DeJoy said the agency has seen higher rates of on-time delivery since that report.

“We are very concerned with the deterioration in service and are working very diligently. In fact, we’re seeing a big recovery this week. I requested that report be put together — oddly enough, we didn’t have measurement briefings at an executive level like this before my arrival, where the whole executive team was involved in looking at what the underlying circumstances were and we’re focused on fixing it,” DeJoy said.

Even with a greater focus toward on-time delivery, DeJoy said the agency still runs 700-800 extra trips a day and thousands of truck trips are still running late. However, he noted that the agency hasn’t issued a “flat directive” to immediately eliminate all extra trips.

“At no time did I say ‘Don’t put the mail on the trucks when they left on time.’ This was not a hard, direct, everything must leave on time. There are still thousands of trucks a day that leave late within a certain timeframe and there are still hundreds of extra trips,” DeJoy said.

The Postal Service has also dealt with staffing issues as a result of the coronavirus pandemic. About 40,000 postal employees have contracted COVID-19 or have shown symptoms that have required them to quarantine. Several dozen employees have died.

DeJoy said employee availability during the pandemic peaked in July, but warned that staffing has been down by about 3-4% on average.  The Philadelphia and Detroit metro areas, he added, are “significantly below normal route run rates” — in some cases 20% below normal staffing rates.

While the Postal Service has enough cash on hand to keep operating through at least August 2021, DeJoy told the committee that’s still an insufficient position for an agency that spends $2.5 billion a month on payroll and has $135 billion in unfunded liabilities.

“Only in Washington, D.C. would that be a good position to be in,” DeJoy said.

While DeJoy defended his efforts to cut transportation costs, he told the committee he had “nothing to do with” longstanding plans to cut post office hours, removing mail-sorting machines from processing facilities and said moving mailboxes predated his time in office.

USPS developed a strategy in May — a month before DeJoy took office — that would remove up to 20% of its mail-sorting equipment from its network. But in any case, the Postal Service announced it would hold off on implementing any more of these changes until after Election Day.

The House passed a bill Saturday that would give the Postal Service $25 billion to withstand short-term challenges. The bill would also prevent the agency from making  “any change to the operations or the level of service provided by the Postal Service” — with this January serving as the retroactive benchmark for service standards.

But in several rounds of questioning with committee members, DeJoy said USPS wouldn’t reconnect mail-sorting machines that have already been disconnected. Cutting late and extra trips, he added, wasn’t an operational change, but was simply adhering to goals to deliver mail on-time.

Much of the hearing also revolved around DeJoy’s $3.2 million in donations to the Republican National Committee and President Donald Trump, who has been critical of the Postal Service and expanding mail-in voting.

Asked about conversations with Trump administration officials, DeJoy said he spoke with Treasury Secretary Steven Mnuchin during negotiations over terms for a $10 billion loan guaranteed under the CARES Act, and told him he would control costs and increase revenue at USPS.

DeJoy said he hasn’t spoken with the president directly about his comments about the Postal Service, but has spoken to mutual acquaintances.

“I have put word around to different people that this is not helpful,” DeJoy said about the president’s comments.

The Postal Service, in its financial statement for July, reported an $8.4 billion loss so far in fiscal 2020. Compared to the same period last year, total revenues are up 9.2%, but first-class mail volume is down 4.9%. Marketing mail is down more than 20% compared to July 2019 and the volume of shipping services has increased by more than 50%. 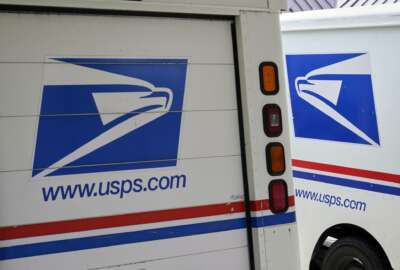