Immigration and Customs Enforcement has problems with detention centers

It may not look like it from the television images but Immigration and Customs Enforcement does maintain standards for the detention of illegal immigrants. But it doesn’t always follow them. And that’s what the Homeland Security Office of Inspector General found at the La Palma Correctional Center in Eloy, Arizona, one of 200 such facilities around the...

It may not look like it from the television images but Immigration and Customs Enforcement does maintain standards for the detention of illegal immigrants. But it doesn’t always follow them. And that’s what the Homeland Security Office of Inspector General found at the La Palma Correctional Center in Eloy, Arizona, one of 200 such facilities around the country.  For more details, Federal Drive with Tom Temin spoke with Principal Deputy Inspector General of DHS Glenn Sklar, and OIG Senior Adviser Ellen McSweeney.

Tom Temin:
Okay, let’s set the scene here. What is La Palma? How large is it? And tell us about what it is you were looking at and for what period of time here?

Glenn Sklar: Yeah, Tom. The La Palma Correction Center is a privately owned and privately managed detention center for men in Eloy, Arizona. And this facility is under contract with the US Immigration and Customs Enforcement, aka ICE. And at the time of our inspection, La Palma housed over 1,100 detainees. And we conducted our inspection between August 2020 and November 2020. That was during the height of the pandemic. There had been an outbreak in August 2020, where 17% of all detainees tested positive for COVID-19. So we inspected detainee housing units, kitchen areas, medical units, recreational units in other common areas.

Tom Temin: Got it, so these are people that have been detained by ICE and then they have one of 200 places they can place these people while their immigration status is determined or a court decides?

Tom Temin: Okay, and what was your inspection methodology? Because, were you able to go there in person or OIG staff given the fact that the COVID was at its high point at that point?

Glenn Sklar: Well, Tom, typically, our unannounced inspections happen in person, we just show up. And we’d be on site and conducted on site visual inspection at each detention center. For example, we’d walk through the facility, we document the review, we’d interview the facility staff, the detainees, etc. But as you might imagine, COVID-19 really limited our ability to conduct these types of inspections for both the safety of our own staff and the safety of the detainees. So we had to improvise during the pandemic, and try out a virtual inspections methodology. So during our virtual inspection, we use video applications to perform a virtual walk through the facility. So we directed the detention facility personnel on a route of where to walk and where to film. And our inspectors selected different days and times to look at video surveillance footage from different housing units. He also asked for logs, which document staff’s use of nonlethal force, and we compare those logs to video footage. We also interviewed ICE and detention facility staff, including ICE oversight staff, medical staff, compliance officers, and so forth. But most importantly, we spoke to the detainees themselves to evaluate their conditions, their confinement.

Tom Temin: Wow. And so that was fairly comprehensive, even though you could not be on site. It sounds like.

Tom Temin: All right. And what what did you find? There are standards for detention right? Correct. Let’s go there first, and these are written and approved by ICE senior staff?

Ellen McSweeney: Yes, ICE has long operated under a set of detention standards. The standards date back actually to 2000. They were developed under the former Immigration and Naturalization Service. But since that time, with input from a wide variety of public and private stakeholders, ICE has actually revised the standards. We applied the 2011 performance-based national detention standards, which were last updated in 2016. And according to ICE, the standard establish consistent conditions of confinement, programs and operations, and management expectations within the overall ICE detention system. That is not necessarily what we found, however, and I can segue to that if you like, Tom.

Tom Temin: Yes, we’re speaking with Ellen McSweeney. She’s senior adviser to the Office of Inspector General and to Glenn Sklar, the principal deputy inspector general of Homeland Security. And what did you find, and what were the shortfalls?

Ellen McSweeney: Well, we found numerous deficiencies. During our unannounced inspection of La Palma, we identified violations of the standards that threaten the health, safety and rights of detainees. Let me note upfront that we found La Palma complied with ICE detention standards regarding classification of detainees according to their relative levels of risk. However, detainee reports and grievances allege an environment of mistreatment and verbal abuse, including in response to detainee peaceful protests of the facility’s handling of the pandemic. And here, I can indicate that in April 11 and 13 detainees in La Palma held peaceful protests at the facility because they felt La Palma was not providing appropriate protective equipment to them to prevent the spread of COVID. A letter signed by 182 detainees indicates the facility responded by using pepper spray pepper balls, chemical agents, and also punished protesting detainees with lengthy stays in segregation. We confirmed the use of chemical agents. Not only through this evidence, but also through our obtaining surveillance videotapes. We also reviewed 27 reported use of force incidents at the facility that occurred between Feb. 1, 2020, and Aug. 24, 2020. And we found that in 11 of these incidents facility staff used chemical agents to gain detainee compliance. With regard to the detainees’ objections about COVID-19 preparation, we did also confirm that although La Palma officials took some measures to prevent the spread of COVID, for example, they served meals in detainee housing areas and restricted visitation. But they did not ensure detainees wore masks and practice social distancing. Another big problem we found was a critically understaffed medical unit that did not provide proper treatment, or refill detainee prescriptions. We identified 21 vacancies during the time of our inspection. So there was a 71% positions filled only. This is not surprising that given these vacancy rates, La Palma did not provide timely care to detainees with regard to sick call requests. Actually, detainees had to wait an average of 3.35 days to receive care. And another deficiency was that La Palma, through the medical unit, did not automatically refill chronic care medication, which resulted in delays for detainees to obtain crucial medication. In one instance, an individual suffering with leukemia was not afforded timely medication.

Tom Temin: All right, well, let me ask you this – this is a contractor run facility. Is there any ICE staff there in general to supervise what’s going on? And how did this get to this point, without some supervision by ICE itself of its own contractor?

Ellen McSweeney: Well, you know, you’re zeroing in on exactly one of the key dimensions of our review, and that is there was a lack of oversight by ICE. The standards are very detailed, and private contractors like La Palma are obligated to follow them. But you’re right, it’s incumbent upon us to make sure that they do so. Now, in this case, ICE actually does periodically or did periodically have detention offices on site, ideally, to respond to detainee concerns, but given COVID they had scaled that back so that the officers were available telephonically. One of our findings was that ICE did not properly educate detainees as to when they could speak with a deportation officer. The standards require posting information such as the specific days and times when deportation officers would be available to communicate. We found that ICE did not do that. And as a result, we found communication deficiencies.

Tom Temin: Yeah, so this place was really kind of a mess then and have they cleaned it up since? I imagine your recommendations went to the heart of all of these issues: Medical staff proper treatment by the detention staff, proper equipment being supplied, because there still is a pandemic on. What’s the status of it now? Was ICE responsive to you, and has La Palma been responsive to ICE?

Ellen McSweeney: ICE agreed with some of our recommendations, but disagreed with others . We’re obviously engaged in an active process of ensuring that ICE comply with the recommendations. We do that by asking for the production of documents and other evidence to show changes in policy and practice. There have been some specific changes. For example, one of our recommendations – No. 4 – requires that ICE require La Palma staff to complete and document medication administration and daily face-to-face medical visits with detainees in segregation, which is a form of isolation in the La Palma facility. And we made that recommendation to ensure detainee health and welfare. In the aftermath ICE gave us a corrective action plan and also conducted a follow up inspection showing compliance with this particular recommendation. So that is one area of good news. Likewise, recommendation 5 we made that ICE ensure La Palma’s medical unit is appropriately refilling and administering detainees’ medication. ICE enlisted a detention services manager and issued a new policy to clarify that it is the duty of the medical unit to refill medication, and such refill should not be dependent upon a detainee filing a sick call request.

Tom Temin: All right. Does this spur you to look at some of the other contractor facilities then? Is this a widespread phenomenon, the use of contractors to operate detention facilities for immigration?

Ellen McSweeney: It’s certainly a widespread phenomenon. An estimated up to 70% of the facilities holding immigration detainees are privately owned and operated. But we need not be spurred to action solely based upon what we found in La Palma. For years, we have conducted annual unannounced inspections of ice detention facilities. We’re statutorily mandated to do that. And we actually have presently a wide audit ongoing to look across all 200 detention facilities and specifically look at the use of segregation, which is, as I mentioned, the isolation of specific detainees whether for administrative or disciplinary reasons. So we’re looking at the use of solitary confinement across all ICE detention facilities in an audit that should be released sometime in the near future, four to six months from now, hopefully.

Tom Temin: Yeah, so to put it in the vernacular, you turned over a rock. And now there’s a lot of work to do.

Ellen McSweeney: There’s certainly a lot of work to do.

Tom Temin: And by the way, the people that are held in detention are here for violating immigration laws, but they’re not held under criminal statutes, correct?

Tom Temin: Ellen McSweeney is a senior adviser to the Office of Inspector General at Homeland Security. Thanks so much for joining me.

Ellen McSweeney: I’m happy to have joined you and look forward to future audiences with you.

Tom Temin: Glenn Sklar is principal deputy inspector General of DHS. Glenn, good to have you on.

Glenn Sklar: Thanks so much, Tom. Appreciate it.

Tom Temin: We’ll post this interview along with a link to that La Palma report at FederalNewsNetwork.com/FederalDrive. Hear the Federal Drive on your schedule, subscribe at Podcastone or wherever you get your shows. 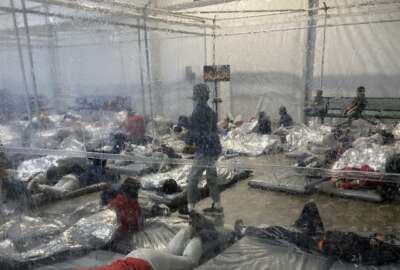 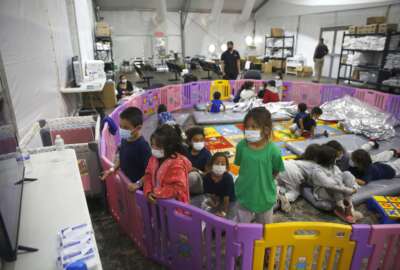 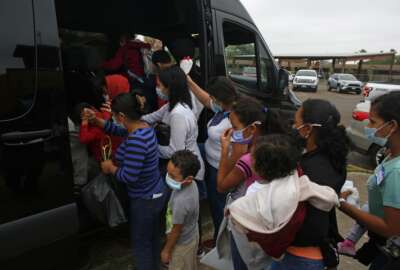