The National Geospatial Intelligence Agency cut the ribbon on its brand new headquarters Monday, putting the ceremonial finishing touches on a workforce consolidation process that the agency has been conducting for the past nine months as part of this year’s defense Base Realignment and Closure moves.

NGA’s sparkling new, $1.7 billion facility in Springfield, Va., is the third largest federal building in the D.C. area (No. 1and No. 2 are the Pentagon...

The National Geospatial Intelligence Agency cut the ribbon on its brand new headquarters Monday, putting the ceremonial finishing touches on a workforce consolidation process that the agency has been conducting for the past nine months as part of this year’s defense Base Realignment and Closure moves.

NGA’s sparkling new, $1.7 billion facility in Springfield, Va., is the third largest federal building in the D.C. area (No. 1and No. 2 are the Pentagon and the Ronald Reagan building, for those keeping score).

The intelligence agency’s moves under the 2005 round of BRAC relocations will bring under one roof an 8,500-member workforce that had been located at a mix of government-owned and leased facilities in Bethesda, Md., Reston, Va., and at the Washington Navy Yard.

The facility includes 2.1 million square feet of office space, a dry cleaner, a beauty salon, a credit union, a state-of-the-art fitness center and a dining facility. The atrium at the center of the main office building — 500 feet long and 120 feet wide — is large enough to house the Statue of Liberty.

“We actually have windows,” Letitia Long, the director of NGA, told Federal News Radio in an interview following the ribbon-cutting. “We never used to have windows in our old facilities, and most members of the intelligence community still don’t. That’s a big morale booster right there.”

Long said co-locating NGA’s D.C.-area workforce in one facility brings the obvious benefits of reducing the travel time for interdepartmental meetings down from a one-hour car ride to a trip down a staircase. But the BRAC move also let the agency, created from a hodge-podge of various high-tech imagery and intelligence agencies in the 1990s, build its own technology infrastructure for the missions it performs now.

“This is purpose-built for our geospatial intelligence mission,” she said. “Having a state of the art infrastructure lets us move data around very quickly. We have advanced technologies that let us visualize, analyze and manipulate that data.”

If NGA’s workforce was inefficiently located before this year, its IT systems were even more so. Before the agency built a new technology center on its new Springfield campus, known as NGA East, almost all of the agency’s computing applications were hosted on a dedicated server of their own.

For example, Long said, NGA can now immediately move all of its critical functions to its other major facility in St. Louis, Mo., in the event a major system failure or disaster occurs, and vice-versa.

Long said the agency was able to maintain almost all of its workforce, despite the move to suburban Virginia. The attrition rate since the move was announced has been in the low single digits, Long said, most due to retirements or transfers to other federal agencies.

The 2005 BRAC round has led to predictions of traffic nightmares in other parts of northern Virginia. Thousands of DoD employees are consolidating in a contentious BRAC move to the Mark Center, an office building that is not served by rail transit and which is surrounded by freeways that are already at capacity. Virginia’s congressional delegation has attempted to reverse or forestall that move, with limited success.

More fears have been raised about the expansion of the main post at Ft. Belvoir, which doubled in personnel size as a result of this year’s military realignments and is now the fourth largest Army base in the continental U.S.

But since a large portion of NGA’s workforce already lived in points south, the agency seems to be one of the rare cases in which DoD’s 2005 realignments will help, rather than hinder, traffic in the metropolitan areas surrounding its facilities.

Vehicles that formally had to traverse the D.C. Beltway to get to Maryland are now in the agency’s huge parking garage. And a newly-constructed freeway leads right up to the doorstep of NGA’s new digs.

“They’re loving this commute here,” she said. “We used a little of our GEOINT tradecraft when this site was picked, and we did a population site density map to see where our folks lived relative to this site. This was one of the best sites that could have been chosen among the rest of the sites that were considered.”

(Copyright 2011 by FederalNewsRadio. All Rights Reserved.) 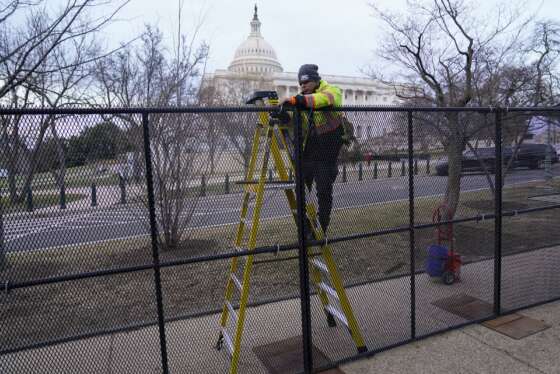 Getting ready for the State of the Union