With the release of President Donald Trump’s fiscal 2018 budget proposal and advanced appropriations, the veteran community has come together to remind lawmakers just how understaffed and outdated some Department of Veterans Affairs (VA) facilities are.

“We fully believe that VA has been under-resourced for quite some time which has led to [an] increase in wait times and such,” Carlos Fuentes, legislative director at Veterans of Foreign Wars (VFW) said on Veterans Affairs Month. “The number one recommendation that we receive from our members when asked how to approve VA healthcare is to hire more doctors.”

In a new report, VFW paired with Disabled American Veterans and Paralyzed Veterans of America to outline recommendations, calling for an 8.3 percent increase in medical funding for the Veterans Health Administration and 10 percent overall for the VA over fiscal 2017.

Due to aging infrastructure and lack of proper planning, Fuentes said many VA facilities have had to reach out to private contractors for updated technology and services. The report also recommended updating the processes by which the VA renovates and builds new facilities, updates technology or hires new staff.

“We [were] glad to see that [VA Sec. David] Shulkin in the recent hearing [said he] agrees that VA cannot really keep up with private sector when it comes to technological advances.” Fuentes said on the Federal Drive with Tom Temin. “We [also] have to take a look at where VA needs to increase staff, and it needs to do it in a smart way so its not replicating what’s available in the private sector. But simply purchasing care is not always the answer.”

As the demand for a veterans healthcare system that is inclusive to all needs continues to grow, Fuentes said the budget should follow.

“I think everyone understands that VA will need to receive an increase this year. The advanced appropriations for fiscal year 2018 are woefully underestimated and that’s due to sequestration and budget cuts, which we fully believe need to be eliminated,” Fuentes said.

He said the Trump administration and Congress have been receptive to VFW’s recommendations and are optimistic that the president will include this increase in the full budget.

Updating and creating new facilities to handle the influx of patients and lack of staff is just as important for VA stakeholders.

One large construction project will begin this Spring at the Walter Reed National Medical Center in Bethesda, Md.

Five buildings, about one-third of the campus, are considered outdated and in need of rebuilding to meet the needs of today’s patients. In fact, the original buildings were designed by President Franklin Delano Roosevelt as sketches on a paper napkin.

“[The] facilities that we are looking at replacing were built anywhere between 1945 and 1960,” Army Col. Anthony Meador,  assistant chief of staff at Walter Reed, said on Federal Drive.  “We have  a bit of an aging infrastructure, and in order to bring in the newest techniques [and] innovations, it’s easier and more appropriate for our patients [if we] to do that with a brand new facility,”

Some of the new proposed facilities will include:

“Currently, we have over one million patient encounters each year,” Meador said. “What we are truly gaining with this new facility are up-to-date enhanced medical facilities — whether its an outpatient clinic or inpatient rooms.”

The early phases of construction have already begun, including developing temporary facilities to continue veteran care during demolition and rebuilding periods.

Meador said the project could be completed anywhere between 2020 and 2022. 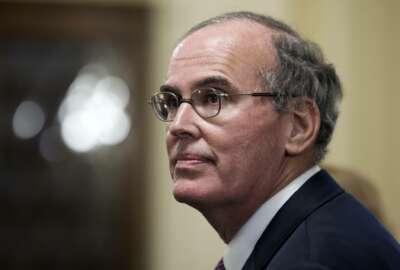 IG breaks down VA’s good, bad and ugly of past year