Federal commuters could see a change in their office parking lots, after the National Capital Planning Commission voted to consider updates to its parking policies.

The commission on Thursday unanimously accepted a parking study conducted by the U.S. Department of Transportation John A. Volpe National Transportation Systems Center, and directed staff to evaluate a handful of actions related to parking ratio policies, variances and facilities’ visitor guidance.

The Volpe research, entitled “National Capital Region Federal Parking Study,” is the product of a year’s worth of research and analysis, to determine whether and what changes NCPC should make to the transportation portion of its comprehensive plan. The commission oversees federal government planning in the National Capital Region.

“It may be beneficial to improve current parking ratio systems so that it better fits forecasted accessibility in the region,” said Michael Weil, an urban planner for the commission. “There may be an opportunity to develop a more predictable, fair and equitable process to modifying parking ratio goals, and that more frequent travel demand management coordination with the commission may be a way to help federal campuses attain their travel-related goals.”

“The key finding from this was that the transportation world over the past 10-15 years has moved from the mobility paradigm to the accessibility paradigm,” Daddio said. “Moving from focusing on moving cars to getting people to their destinations. That might seem sort of obvious, but it’s really a profound shift in policy and planning and technical tools that support decision making.”

Daddio said local jurisdictions are using their parking policies like NCPC, which means limiting and maintaining parking to encourage public transit use and more efficient land use patterns.

Some of the agencies used in the study include the National Institutes of Health, Joint Base Anacostia-Bolling, Marine Corps Base Quantico and the Pentagon.

The modeling study boiled down to three things, Zitzow-Childs said: the NCPC’s parking policies and processes could be more data-driven, the creation of a more standardized modification process, and performance-based monitoring.

For the data-driven portion of the report, Zitzow-Childs pointed out that parking ratios should better align with what’s acceptable for the region now and into the future. The Historic D.C. boundary zone ratio is one spot for every four employees, however, “facilities in that area are generally offering twice as much parking as that policy would suggest,” Zitzow-Childs said.

“Into the future we want to have policies that are both aspirational but also achievable, so that would suggest that this 1:4 zone maybe should be broken into different components so that facilities can have a more targeted goal,” Zitzow-Childs said.

The data-driven recommendation then proposes a 1:5 ratio for L’Enfant City; 1:4 ratio for “transit-rich corridors” like Arlington County; a 1:3 ratio for “transit-accessible” areas which would be a community within 2,000 feet of a subway or bus station; a 1:1.5-2 ratio for suburban area beyond the Metro transit system.

“This is a much more data-driven approach,” Zitzow-Childs said. “The policy goals tend to be more in alignment with facilities. It’s still aspirational but much more achievable.”

But agencies shouldn’t worry that the new ratios are set in stone, Daddio said. Part of the data-driven process is a transparent mission analysis that takes into account the unique missions of each agency, Daddio siad.

The process would also allow agencies to explain why they might need to vary from the parking policies, taking into account employee shuttles to transit systems, access to facilities and lifecycle costs of facilities.

“We felt it was important to have a process like this, that is transparent and data-driven, but also are optimistic that with revised policy areas, that the frequency of these requests would be reduced because the policies are going to be more in alignment with what we think these facilities should be able to achieve,” Daddio said.

Peter May, the associate regional director for lands and planning at the National Park Service, and representative for the Interior Department commission, said he was shocked at how many of the 20 case study agencies were above their parking standards.

“I’m puzzled as to how that could actually have come about,” May said. “It raises a concern about the standardized modification process, because it looks like there’s a whole bunch of candidates for modifying that process because there’s some reason why they need to have more parking. I’m not sure that’s really the right strategy. I certainly would want to see a modification process that is done in a manner that’s consistent from agency to agency and site to site; that’s certainly a desirable thing but not at the expense of just having to build a lot more or maintain a lot more parking.”

Weil said some of that data was based on master plans that were several years old.

Daddio also stressed the importance of more frequent communication between agencies and NCPC, highlighting the recommendation to have commission staff collect “a few key data points” on an annual or biennial basis. This data would include things like how many employees are located at a federal facility and how many parking spaces are provided.

“Both things that don’t change very often,” Daddio said. “This should not be a huge burden to facilities and I think will help NCPC staff understand more closely how facilities are achieving these different policy goals.”

Gallas asked whether the continuous monitoring would be a burden on planning commission staff, but Weil said staff would be looking at developing a process “that would not be very burdensome at all.”

“If we were not able to do so, I think we would probably not propose anything,” Weil said. “That will be one of the key tasks we’ll evaluate over the next year. We by no means are thinking that we’re going to be receiving these pretty detailed TMPs [transit master plans] like federal agencies usually submit with master plan updates every year or two. What we’re thinking now is there may be a possibility to have an abbreviated kind of check-in set of performance metrics that  can be transmitted to staff, without a burden on either the applicant agency or NCPC staff.” 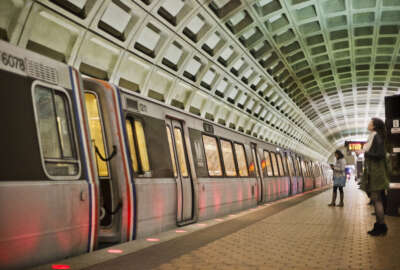 Survey: How are Metro’s track repairs affecting your commute?

The Darkside of Your Daily Commute