The Army Corps of Engineers is all about infrastructure, in particular the nation’s waterways. When the infrastructure bill was signed into law, the Corps got a good chunk to get after some overdue work. At this week’s Association of the U.S. Army conference, the Federal Drive with Tom Temin spoke with the Corps’s deputy commander, Maj. Gen. Richard...

The Army Corps of Engineers is all about infrastructure, in particular the nation’s waterways. When the infrastructure bill was signed into law, the Corps got a good chunk to get after some overdue work. At this week’s Association of the U.S. Army conference, the Federal Drive with Tom Temin spoke with the Corps’s deputy commander, Maj. Gen. Richard Heitkamp. They began their discussion addressing the Corps’ work in the aftermath of Hurricane Ian.

Richard Heitkamp: We’d like to step in when our nation needs us the most. We’re the nation’s Corps of Engineers. So anything we can do to keep people in their homes really is the focus for any disaster response. So as you mentioned, [Operation] Blue Roof is one of the real cornerstones of our response. And it has really evolved over the years. Used to be we’d go door to door and put up a ladder and get up on top of the roof and measure it up. Now we do it with drones and handheld applications on your phones. And so we still have a call center. It’s like the Jerry Lewis telethon from our days, right? But we only take about 12% of those calls into the call center. Now, it’s all via phone and tablet, and online applications. The legal work that has to be done for the right of entry for us to go in and measure the roof and assess it — actually, the homeowner can take pictures themselves on the application and send those in to accelerate the process. And so instead of it taking 30 or 60 days for a contractor to respond and go in and put up a blue roof, now it can take a matter of days or less than weeks before that contractor’s there, which means less water damage for the homeowner, which means they can stay in the home. So whether it’s temporary power, keeping the homeowner in the home, repairing utility services for water, or wastewater services, whatever we can do to keep the impacted population in their homes, and so we’re not treating people who have been displaced, that really takes a big load off of FEMA and the impacted states.

Tom Temin: Any estimate of how many blue roofs there will be?

Richard Heitkamp: There will be multiple counties that are offered this opportunity. And so we will stay until every one of those counties that are impacted has the opportunity to apply for those benefits. We will then assess what type of options we can offer, how they will fit for each homeowners needs. So we’re there until each homeowner can request those benefits.

Tom Temin: But it could be thousands?

Tom Temin: So contractors actually apply it, but the Army Corps assesses the need and verifies it using drone technologies? You can look down and say yeah, that’s a 30 by 60.

Richard Heitkamp: Exactly, exactly. And then we authorize the contractor to go in after the fact and to apply the roof solution.

Tom Temin: Does it have to be blue? Tarps come in a lot of colors.

Tom Temin: All right, good. No red roofs, I guess, down there. Quick update on the Miami flood mitigation plan, which kind of is not part of the most recent hurricane. But it brought to bear, front of mind, what can possibly go wrong here. And there was some controversy; people didn’t like the appearance of what the Army had proposed. What’s going on there?

Richard Heitkamp: We’re still continuing to work with the local community. What we would like to envision is flood mitigation that’s really in depth. So there’s more to flood mitigation than just a sea wall. And I think that was sort of the initial response. The concern is that the the appearance of a sea wall is not optimal for a community. But there’s different ways of designing sea walls that can appear in very different ways. And so we’re asking, how can we redesign that so it looks like something different? And there’s really innovative ways: You integrate a park and so it’s at different levels, and the appearance can be quite dramatically different. And so I think, working with the community, we can come up with those. You also look at flood mitigation in depth. So if you start working further out into the ocean, to slow down the effects of that storm surge, you really can reduce the amount of impacts when it does get to shore. So there’s a lot of different things we can do with a community that is very set on protecting that shoreline. If pulling back is not the solution, there’s other opportunities. It just comes at a different cost.

Richard Heitkamp: But in an area like Miami, which is very tied to the coastline, we can develop those options. Then they can make the decision.

Tom Temin: Because at some point it has to actually happen. Because if you believe that hurricanes are getting worse, and this is going to be happening more often, you can’t wait 25 years while everybody signs off on something.

Richard Heitkamp: Exactly. We have to we have to provide the solutions they need today. And we’re seeing the frequency and intensity simply go up.

Richard Heitkamp: Really our agenda is focused on coming up with new types of solutions. In a very basic form, we’re not going to be able to use the old technology to develop new-old solutions with every one of our projects, we want to put a little bit of money aside for research and development. So if you think about harmful algae blooms, which we see all over the continental United States — it’s not just in Florida anymore — so what are some innovative ways to resolve harmful algae blooms? We just can’t build larger and larger detention areas because they take up a huge amount of real estate at a huge cost. So we’re looking at things like actually making biofuel out of algae. Right now, it’s not at the scale that is going to make that a viable solution. But as we continue to refine that technology, at some point, it will be. So there’s a lot of innovative solutions to solve old term problems.

Richard Heitkamp: It’s a huge kick, sir. And it means a lot to us because our aging infrastructure was in dire need of improvement. And we appreciate the support from Congress and the American people to have the opportunity to go back and repair so much of the vital infrastructure for our country. We are the protectors of our waterways, the Corps of Engineers, and people don’t often think about our waterways as these vital connections for our supply lines, our critical supply chains. But our waterways are fundamental to our supply chains into our commerce sectors.

Tom Temin: There’s barges getting stuck in the Mississippi, even as we speak.

Richard Heitkamp: Right, because of low water levels. So even in the best of times, we still have to do a lot of dredging, remove material from the bottom of a river so that those barges can get through. And it’s not always just grain, or fertilizer, or concrete or cement. It’s often those critical microchips that are going into our cars that are coming into Baltimore Harbor, that we’re dredging to make sure that they can get into the East Coast, to go into those plants that make the cars here in the United States. So our waterways are fundamental to the commerce in our country, the manufacturing capability in our country. And so the infrastructure bill has provided us the capability to ensure that those waterways stay open.

Tom Temin: And do you have priorities for what specific waterways or projects you want to do first?

Richard Heitkamp: Oh, absolutely. And there’s a lot of technology that goes into it as well. So it’s almost like predicting where the snowstorms are going to be so you can remove the snow. Dredging is a lot like that. And we can predict where’s the sedimentation going to be? How do we remove it, where, and almost like focusing on certain areas at certain times of the year. We also look at the environmental impacts. So we don’t want to impact where the turtles are going to be nesting and where they are going to be at certain times of the year. So we’ll put off actually dredging in that area.

Tom Temin: A seasonal kind of problem. Where are you gonna go first? What’s the first thing on the agenda that you’re actually going to start digging?

Richard Heitkamp: Oh, it absolutely is so complicated that we could take the rest of the hour to talk about that. It’s a very complex industry to start with. So there’s a whole industry dedicated to removing that material from the bottom of a river.

Tom Temin: So I was just asking, are there any particular rivers you can name that are going to be first on the list?

Richard Heitkamp: Yes, there’s a whole complex of those. One of the most important is the Mississippi River and its tributaries. So over 60% of the world’s foodstuffs — the world’s foodstuffs — comes from the Mississippi River and its tributaries. And that’s not to mention the commerce that we just talked about. So that’s fundamental. And you just talked about the drought that they’re suffering right now. And that makes it even more important that we are there doing the preventive maintenance of that dredging to make sure that waterway stays on.

Tom Temin: So you want to turn it into Young Man River. 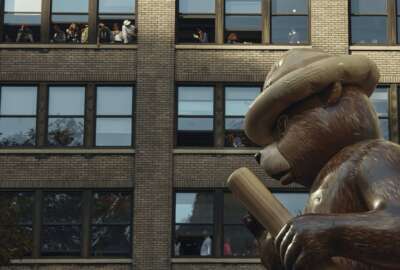 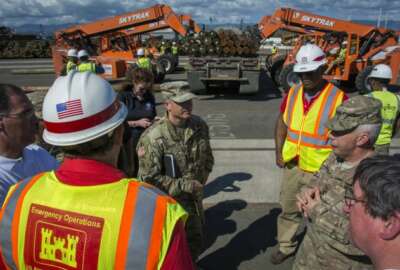 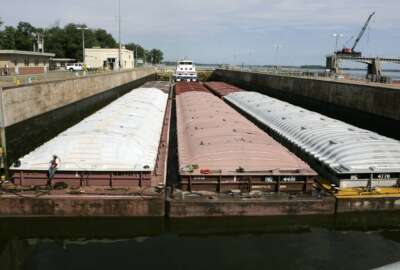