Shutdown for a year? Imagine that…

No, seriously, imagine what it would mean.

Many federal workers, contractors and other business owners and taxpayers being harmed by the shutdown were dismayed last week when Sen. Chuck Schumer (D-N.Y.) said President Donald Trump told him “he’d keep the government closed for a very long time, months or even years.” The President later confirmed his willingness to keep large parts of the government closed.

Should you be worried about a shutdown that lasts all...

No, seriously, imagine what it would mean.

Many federal workers, contractors and other business owners and taxpayers being harmed by the shutdown were dismayed last week when Sen. Chuck Schumer (D-N.Y.) said President Donald Trump told him “he’d keep the government closed for a very long time, months or even years.” The President later confirmed his willingness to keep large parts of the government closed.

Should you be worried about a shutdown that lasts all of 2019, and perhaps even into 2020? No. It is not going to happen. While I admit I expected the shutdown to end prior to the change in control of the House of Representatives on January 3, there is no way it is going to last a year.

Imagine the political pressure on the Congress and White House if tax refunds, which are taxpayer money being held by the government, are delayed for a year. The outcry would overwhelm the political interests of the president and members of congress.

Imagine the optics and the real hardship if members of the United States Coast Guard are not paid for a year. Do we really think Americans are going to stand by and watch members of one of our military services living on food stamps and welfare while they are carrying out their mission?

Imagine thousands of officers at the Transportation Security Administration not being paid for a year while expecting them to carry out a vital mission that enables air travel to operate smoothly. Unlike uniformed military personnel who cannot simply walk away and find a new job, transportation security officers are employees who can and will find other work.

Imagine National Parks exhausting every dollar they have in reserve and closing for a year. No Yosemite vacation. No Yellowstone. No Grand Canyon. None.

Imagine the backlog in law enforcement training that is created by shutting down the Homeland Security Department Federal Law Enforcement Training Center. Although law enforcement is generally excepted from the shutdown, training typically is not. The same applies to training new air traffic control specialists at the Federal Aviation Administration. Training slots are perishable. When a training center with constrained capacity closes, the slots cannot be replaced. They are gone forever. Now imagine the ripple for months or even years created by the training backlog created by the loss of those slots.

Imagine millions of food stamp recipients going hungry because they have been cut off from benefits. Then cut off school lunch programs that are the primary source of nutritious meals for millions of children. Then imagine the television coverage of those American children crying because they are hungry.

Imagine no more routine inspections of drug plants because the Food and Drug Administration has no money to carry them out. Add to that the recent stories about blood pressure medicines that are tainted with carcinogens and you could imagine even more citizens requiring blood pressure meds.

Finally, imagine 800,000 federal employees not getting paid for a year, with half of them being expected to come to work every day and put in a full day’s work for an employer that says it cannot guarantee it, but it will most likely pay them when it gets the money. Imagine the number of employees who will find other jobs, because the unemployment rate is low. Then try to imagine how how those folks could be replaced. Yes, the government can fill excepted jobs during a shutdown. Would you take that job? “Start today, work with no leave and no pay, and some day we will probably pay you. All you have to do is trust us.”

These are just a few examples of the consequences of shutting down parts of the government. Or more accurately, a real shutdown of part of it and a pretend shutdown of part of the government where hundreds of thousands of civilian workers and even our U.S. Coast Guard are asked to work without pay. It is sustainable for relatively short periods, up to a month or maybe even two, but then the wheels start to come off. Our government is not designed to work that way and vital services are at risk.

Now imagine something that really does seem more and more unlikely. A Congress and White House that operate effectively as intended by the Constitution of the United States. Sadly, that seems even more unrealistic than the idea that the current partial shutdown could drag on for a year. 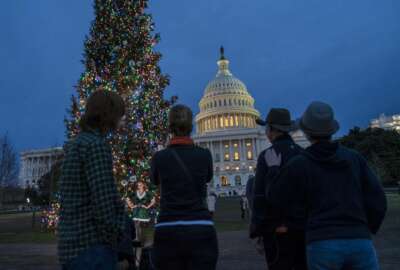 No deal to end shutdown; Trump says ‘could be a long time’