The Prevent a Government Shutdown Act of 2015, Van Hollen explained during  the announcement on the U.S. Capitol grounds this week, will stop a shutdown, either through cooperation or the legislation itself.

“The bill calls for the immediate establishment of a bipartisan negotiation committee  — House, Senate, Republicans, Democrats — to avoid the shutdown and to do so in a way that lifts these caps that are stifling important investments in our future,” said Van Hollen, who is a ranking member of the House Budget Committee. “In the event that this didn’t happen by the end of the month, the bill would say starting Oct. 1, we will lift the caps by equal amounts — $38 billion on the important national investments … and an equal amount, $38 billion, on the defense side which the national military commanders have said is necessary.”

The bill also is being sponsored by Reps. Rosa DeLauro (D-Conn.) and Barbara Lee (D-Conn.), and has the support of NDD United, an organization made up of more than 2,500 groups that benefit from non-defense discretionary federal dollars.

Speaking alongside NDD United representatives, DeLauro called for a lifting of the caps to “restore compassion to our federal budget.”

“By failing to raise the caps, we fail to value our workers, our students, our medical researchers, first responders, veterans, families and millions of others,” she said. “People know in their hearts, budgeting is not just numbers on a spreadsheet, it is an expression of the values that we have as a nation, it is our moral responsibility to address these issues.”

Congress has until Sept. 30, the last day of fiscal 2015, to make a decision on 12 spending bills or pass a continuing resolution to avoid a shutdown and figure out whether automatic budget cuts will take effect once again.

“We need to remember that the last government shutdown cost our nation $24 billion,” Lee said. “We are failing in our duty to the American people.”

Lee as well as her congressional colleagues said the blame largely falls on the stubborn actions of the GOP and its members’ refusal to come to the table.

Some Republicans are working to tie the spending  bills to issues such as federal funding for Planned Parenthood, but this week House Speaker John Boehner (R-Ohio) told reporters the goal was not to shut down the government.

“We’re here to say to Speaker Boehner and our Republican colleagues, let’s sit down and negotiate on a bipartisan basis a way to make sure we meet the vital investments in our country, that we lift the so-called sequester caps —these tight caps on both non-defense and defense that are harming important national priorities — and let’s do it between now and the end of this month in order to avoid a government shutdown,” Van Hollen said. “So either way, under this legislation, whether through negotiation or whether through the legislation itself, we will  make the investments we need and we will prevent a government shutdown. So we hope everyone will come together to head down this path.”

The Prevent a Government Shutdown Act of 2015: 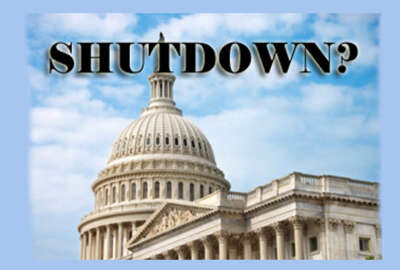