Election Days results left some American voters cheering, and others scratching their heads, but for congressional members comes the resilience and understanding that no matter their political leanings, it’s time to get to work.

After all, it’s only two years until midterms.

“We have to play careful defense,” said Rep. Don Beyer (D-Va.), who won his race in Northern Virginia’s 8th District. “I, with President Obama, would like President-elect Trump to be a good and effective leader....

Election Days results left some American voters cheering, and others scratching their heads, but for congressional members comes the resilience and understanding that no matter their political leanings, it’s time to get to work.

After all, it’s only two years until midterms.

“We have to play careful defense,” said Rep. Don Beyer (D-Va.), who won his race in Northern Virginia’s 8th District. “I, with President Obama, would like President-elect Trump to be a good and effective leader. I want him to be a good president and part of that will be respecting our workforce and elevating them. Too often in the past, presidents-elect have come in having beaten up the federal workforce through the election, and blamed everything on government workers or a bloated workforce. Yet we have fewer federal workers per U.S. citizen than we’ve had in our lifetimes, and we get ever more efficient, ever leaner. I want to make sure that we’re protecting the people that are left.”

Rep. Gerry Connolly (D-Va.) who ran unopposed in the 11th District, which includes parts of Northern Virginia, said he envisioned an agenda in which Congress continued to help victims of the Office of Personnel Management data breach, and the passage of the FAIR Act, which would boost federal pay.

“As we embark upon the 115th Congress, it is my sincere hope that the House seizes bipartisan opportunities to demonstrate our shared commitment to the functionality of the federal workforce,” Connolly said in a statement to Federal News Radio. “These dedicated public servants are starving for constructive attention from Capitol Hill, and we owe them a solutions-oriented agenda.”

Federal News Radio reached out to many of the congressional elections winners in the D.C. area, however, few immediately responded to a request for comment.

Democrats swept many of the congressional races around the Beltway. In Maryland, Rep. Chris Van Hollen won the seat of retiring Sen. Barbara Mikulski, a Democrat. Former Maryland Lt. Gov. Anthony Brown won a seat in the House, as did Jamie Raskin, a state senator and Democrat. Rep. John Delaney (D-Md.) also kept his seat.

The District’s non-voting delegate to the House, Eleanor Holmes Norton, is also returning for the next session.

In Virginia, Beyer and Connolly held on to their blue seats, but Rep. Barbara Comstock (R- Va.) is one of the few Beltway Republicans — a title that holds a lot of responsibility according to some political pundits.

Don Kettl, a professor at the University of Maryland’s School of Public Policy, said Comstock can be a resource for Republicans on how to address federal workforce issues.

Making it easier to fire federal employees after just getting their vote isn’t a strategy that can last long in Congress, Kettl said.

“The opportunity for her here is that the Republicans are going to need in some occasions every vote,” Kettl said. “She will be at an opportunity to help perhaps file some of the sharp edge off some of the Republican strategies and on the other hand may be in a position to extract some benefits for [her] district in exchange for a vote at times when they really need her badly.”

As for Beyer, he, Connolly and other Northern Virginia Democrats are going to have to deal with the “steamroller” coming down the road in the form of Republican efforts to “drain the swamp.”

“There have been a lot of promises to try to make big changes,” Kettl said. “There’ve been very specific ideas, including the hiring freezes, the hiring and firing kinds of challenges to try to convert more federal employees to at-will employment.”

Those are going to be “radioactive issues,” Kettl said, and congressional members like Beyer are going to need to find their voice in the Democratic caucus to carve out a position on those issues.

Maryland lawmakers will also need to find ways to carve out their roles themselves on Capitol Hill, though Van Hollen might have an easier time of it thanks to his 13 years in federal office.

Paul Posner, director and professor of the Master’s in Public Administration program at George Mason University, said Van Hollen has “kind of exhausted his portfolio in the House.”

Van Hollen is the ranking member for the House Budget Committee.

“I think the prospects are higher,” Posner said. “There’s so many more committee opportunities for freshmen in the Senate than there are in the House. Your ability to find issues that are in sync with yourself and your district together, and be an effective voice … I think really multiplies in the Senate.”

Kettl said the former lieutenant governor — who lost the 2014 Maryland gubernatorial race to Republican Larry Hogan — will get an opportunity for a clean slate as he comes to Capitol Hill.

“For all the difficulties that he had in the campaign against Larry Hogan, he’s got the advantage that comes from stepping into this new job at a time of such extraordinary pressure on the party, where every person who is part of that campaign will be extraordinarily valued and will be expected to step up and be a part of that campaign,” Kettl said. “People who are part of the Democratic army will be welcomed in and I think that past issues will be pushed aside.”

Kettl said Brown’s background in various issues like military service and transportation give him a wide variety of options to choose where he’ll put his focus while in office.

Familiar faces didn’t just win elections in the D.C. area — incumbents across the country held on to their seats, and potentially their spots on powerful congressional committees.

What they’ll face in January, said Todd Eberly, associate professor of political science and coordinator of public policy studies at St. Mary’s College of Maryland, is something no one has seen since 2011.

“That is unified partisan control of government” Eberly said. “Obama had it for two years. It was an incredibly productive two years, a lot of big ticket Democrat issues went through Congress and to his desk and now it’s gonna be two years of unfettered Republican control of government, and a lot of their wishlist is going to go through Congress in that first year or two, before the midterms may reset the table a little bit.”

Eberly said he does expect a push in more reforms with veterans affairs, and there are also “questions of freezing other areas of government spending.” 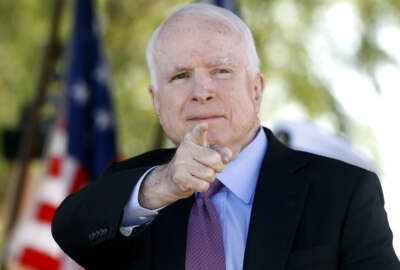 In Trump aftermath, looking at the mad smorgasbord of media