There are computers programed by the Defense Department to binge watch Desperate Housewives in the name of science.

Depending on whom you ask that is either a solid investment or a waste of taxpayers’ money.

Sen. Jeff Flake (R-Ariz.) is critical of some of the ways DoD spends its money, especially in the research realm. In 2016, he released a wastebook of government studies that “will leave you scratching your head.”

This month, Flake took things a step further by convincing the Senate to add a provision in the 2018 defense authorization bill that requires DoD to put the price tag of its projects in its press releases and other documents describing project funding.

“Getting the Pentagon to finally spill the beans on project funding is a buzzworthy victory in the long-brewing effort to put a lid on wasteful spending,” Flake said in a Sept. 19 statement aimed at making fun of a study to examine why walking with coffee causes it to spill and concluded coffee drinkers should use a lid.

“With the national debt now surpassing $20 trillion, putting this measure on the president’s desk will send a clear signal that Congress is paying attention to how taxpayers’ hard-earned money is being spent,” Flake stated.

Fiscal conservatives and some think tanks like the White Coat Waste Project feel some research initiatives are wasting taxpayer dollars.

“These studies might make a funny headline, but unfortunately taxpayers are stuck footing the bill for research that is often wasteful, unnecessary and in some cases just outright stupid,” said Justin Goodman, vice president for advocacy and public policy at the White Coat Waste Project.

Flake’s amendment adds a layer of transparency that isn’t refuted by either side, but some analysts think politicians are being too hard on scientific studies that seem outlandish.

The American Association for the Advancement of Science gives out a Golden Goose Award every year to research that may seem odd or obscure, but had an amazing impact.

There are handfuls of crazy sounding studies out there: The sex life of the screwworm fly,  a study to find America’s next top model, why is yawning contagious and where does it hurt most to be stung by a bee are all real studies that have been funded by the government.

But that doesn’t mean they don’t have value, says Joanne Carney, director of government relations at the American Association for the Advancement of Science.

“If I were to give you a headline that said ‘We are spending money sending rat pups to a spa for massages’ you’d probably think that is utterly ridiculous,” said Joanne Carney director of government relations for the American Association for the Advancement of Science. “But there are thousands of babies that are born premature. Now if I were first to give you a headline that premature babies have a higher rate of thriving and coming out of neonatal care because of new massage techniques, you’d probably think that was a good use of money by the National Institutes of Health.”

Carney said finding the information about premature babies would have started with the rat pup massages.

That is a actually a real study that won a Golden Goose award. So is the study mentioned earlier about the sex life of screwworms is not.

Screwworms infected U.S. livestock, often killing large numbers and ruining farmers’ lots. The research found a way to eradicate the screwworm based on the female being monogamous. The studies saved billions of dollars in the United States over the last fifty years, despite being ridiculed by Congress as waste.

Of course, not all studies are as successful as the sex life of the screwworm, but it is hard to say what research may come in handy.

Bracken estimated that 87.5 percent of biomedical research may be wasteful due to inefficiency, design flaws and redundancy.

“The only access that most American taxpayers have to the results of government-funded science is a press release or a story on the news they might see,” Goodman said. Flake’s provision “is the most efficient way to get the Americans who are being forced to pay for this research the information they need to determine if they believe this is a judicious use of their money.” 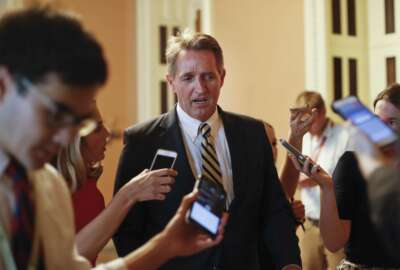