Can a divided Congress come together? On certain issues, experts think it can

Experts pretty much agree that the new Democratic House majority is going to spawn a flood of investigations into President Donald Trump’s administration. But it won’t all be oversight and battles over spending priorities.

“I really think there’s a strong bipartisan agreement on the Hill that we are moving from a government acquisition perspective, digitizing the capabilities of the federal...

Experts pretty much agree that the new Democratic House majority is going to spawn a flood of investigations into President Donald Trump’s administration. But it won’t all be oversight and battles over spending priorities.

“I really think there’s a strong bipartisan agreement on the Hill that we are moving from a government acquisition perspective, digitizing the capabilities of the federal government, customer experience,” Corbin Evans, director of regulatory policy at the National Defense Industrial Association said at the Oct. 26 Washington Technology 2019 Outlook and Beyond event. “I think that we have strong bipartisan alignment around a digital future for the country, whether we’re talking about national security, or customer experience, cloud adoption, all those major elements of the technology sector and what the government needs to buy, I think we’re all wedded to a course and direction.”

Current Ranking Member of the House Oversight and Government Reform IT subcommittee Robin Kelly (D-Ill.) has championed IT modernization legislation many times in the past. That includes introducing the Connected Government Act in 2017, which, after being signed into law in January, required future and re-designed government websites to be mobile friendly. Kelly has also worked across the aisle with current IT subcommittee Chairman Will Hurd (R-Texas) numerous times to cosponsor legislation and advance IT modernization in federal agencies. Kelly held on to her seat on Nov. 6, while Hurd’s race was still too close to call at the time this story was written.

But that doesn’t necessarily mean Kelly will become chairwoman of the IT subcommittee. Rep. Gerry Connolly (D-Va.), who was also re-elected, said the organization of subcommittees and leadership still needs to be addressed.

“We still have to have a committee reorganization session, where we will determine the number and jurisdictions of the various subcommittees,” Connolly said. “How many will there be? What will they be? Will we have the same subcommittees? Will there be new ones? Will we consolidate some? We don’t know any of that yet.”

Analysis from Mike Hettinger, president and CEO of the Hettinger Strategy Group, said Connolly could himself be a candidate.

“Importantly, we expect Rep. Gerry Connolly, a strong friend of the government contracting industry and the current ranking member of the Government Operation Subcommittee, to play a major role on OGR in the 116th either as chair of a combined government management and IT subcommittee or as chair of either IT or government management (depending on how they are constituted). It is unclear at this time what role Rep. Robin Kelly (D-Ill.) the current ranking member of the IT subcommittee desires to play,” Hettinger said.

And beyond symbolic gestures at legislation that will likely have no future in the Senate, expert congressional analyst David Hawkings told the Federal Drive with Tom Temin that Democrats may try to bring President Trump to the negotiating table over big ticket items like immigration reform and long-promised infrastructure plan.

“They know that just running against Trump and just investigating him and doing oversight and talking about impeachment for the next two years is not a politically easy formula for holding onto control,” Hawkings said. “That more likely the voters would reward the Democrats in 2020 if they got something done, if they did work with the president to come up with some compromises. Legislative accomplishment would be a more reliable formula for having more than a two-year control on the house than just railing against the president at every turn.”

And Democrats seem to be laying the foundation to do just that. Current Ranking Member of the House Appropriations committee Nita Lowey (D-N.Y.) said in a statement that the committee will be prioritizing an infrastructure deal.

“In the 116th Congress, @AppropsDems will prioritize investing in our country. We must raise the unworkable budget caps and restore funding for the safety net & infrastructure. We must reclaim Congress’ Constitutional power of the purse and conduct rigorous oversight of @POTUS.”

In addition, this may be the first time a member of Congress has mentioned raising the budget caps since the Bipartisan Budget Act earlier this year, which raised the caps on spending for 2018 and 2019. But Congress is going to have to raise the budget caps for 2020 as well. Otherwise, they’ll have to find a way to cut the budget by 10 percent, or trigger automatic across-the-board sequestration cuts.

And budget negotiations will spotlight another committee transition that will have major repercussions: the House Armed Services Committee.

“I think we’re going to see [Current Ranking Member Adam Smith (D-Wash.)] is going to have a different tack than [Current Chairman Mac Thornberry (R-Texas)] on the armed services committee. What they want to spend money on, the priorities are going to shift,” Evans said.

Hettinger said that Smith is committed to military personnel and their families, and to providing the troops with the best possible equipment. But this is another area where oversight is likely to increase, especially with the budget and contracting issues. Hettinger said Smith is likely to focus on cutting waste, fraud and abuse, and ensure that tax dollars are spent efficiently. 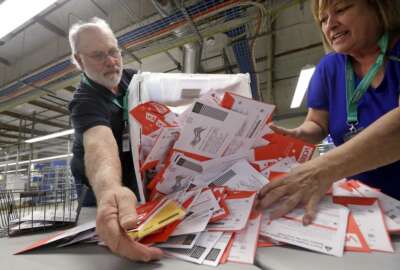 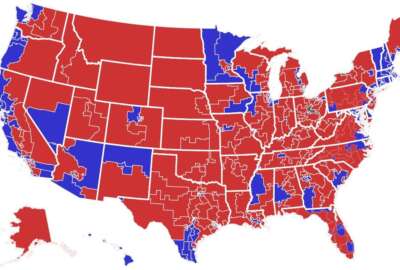 House races in these states could impact federal agencies