For the first time in a couple of dozen blue moons, Congress may not pass the National Defense Authorization Act before the end of the fiscal year. The House and Senate versions have some politically serious differences. For a comparison, Federal Drive with Tom Temin turned to Bloomberg Government senior national security reporter Roxana Tiron.

Tom Temin: Roxana, good to have you back.

Roxana Tiron: Thank you very much for having me. And yes, I think there are some questions about the defense authorization bill this year, mostly because it is an election year and also because it has a pretty big data threat hanging over it. I think the main concern about the bill is that they did not want to place lawmakers and particular senators who may have some tough reelection races to take a vote to basically override the President’s veto over the defense authorization bill. Now that veto threat comes over a provision in both the House and the Senate bills that would basically force the Pentagon to rename military bases that bear the names of Confederate generals, they also go a little bit farther and ask for basically all the remnants of the Confederacy to be erased. Symbols, all sorts of other paraphenlia that the military likes to have around. All of that is supposed to be gone.

Tom Temin: So is it fair to say that the removal of the Confederate memorabilia and so forth is bipartisan? Because if it’s in the Senate and the House versions, it has to be something both parties seem to back.

Roxana Tiron: Yes, it is. Basically, both bills in the House and the Senate passed by a veto proof majority, which means that if the president vetoes that bill, it goes back to Congress and they can take a vote and override the president. So basically, win on this issue. The problem in particular and I think that’s why they’re in part holding this up is because Senator Jim Inhofe, the chairman of the Senate Armed Services Committee, promised the president that he would take out the provisions asking For the renaming of the basis, the question is not very clear how he’s going to do that. And he’s not quite tipping his hand.

Tom Temin: So but right now, it’s still in there.

Roxana Tiron: Right now, it’s still in there. They barely have started. I mean, normally, they would name conferees at this point, but they haven’t, they don’t like to named conferees during an election year. Because once you do that, then there’s motions to instruct conferees. Basically, there’s motions to ask conferees to do certain things during the negotiations. And so I think leadership is trying to avoid that in particular. Which means that staff is working on this, no doubt. However, the main issues that usually go to the lawmakers won’t be tackled until after the election.

Tom Temin: Right. And so with only one week to go roughly and Yom Kippur is next week, they won’t have the ability to get this done, as they have for what 60 years, before the end of the fiscal year.

Roxana Tiron: Correct. But just to make a point, they hardly ever do it before the new fiscal year starts October 1. Usually, us defense reporters are jammed with defense authorization bill in December. The real cutoff is December 31, it’s when some of the authorizations run out and that’s when lawmakers start to worry that they might not have a bill. So really the real deadline is December 31. However, they do want to have it done ahead of time.

Tom Temin: Aside from the Confederate issue, are there other substantive policy differences that are tough to iron out between now and then?

Roxana Tiron: Basically everybody’s saying that once the election is over, I think everybody’s hoping for the election to go smoothly and to be able to just tackle everything in the lame duck session. They don’t think so. There are not that many issues that would stop them in their tracks compared to previous years. I think the main issue really is the Confederate Issue based on the promise that Senator Inhofe made. So the question is, how are they going to go about this? Is this going to hold things up? There are other issues in there, for example, the House doesn’t stop the closure of Guantanamo Bay. They’re silent on it. They don’t prohibit the closure and the Senate does. So that’s another issue that also the Trump administration has brought up. There’s a couple other things in the House bill, particularly related to the recent protests to the Insurrection Act to the kind of authority the President would have, basically limiting the President’s authority to call up active duty military and suppress protests. All of those things have attracted opposition from the White House and did not get to be included in the Senate Bill. They are making some changes. Both of the bills are making some changes in the program that transfers excess military gear to the police. The House has much stronger language given that it’s Democratically led, but the Senate also is codifying the type of equipment that the military cannot transfer. And the military, in all honesty has not transferred those in a long time, such as like grenade launchers, but they’re also not allowing them to transfer track combat vehicles and so forth.

Tom Temin: Sure. And getting back to the renaming of the bases, I guess the military leadership hasn’t really weighed in on this because it’s not the kind of thing they want to weigh in because it is a political issue. But many of those old time generals that ended up in the Confederacy, I guess, were also West Point comrades of the people that ended up in the Union. So there’s a little slightly different connection with those people than the general public my sense.

Roxana Tiron: Sure, there definitely is history there. However, you’d be surprised to find out that General Milley, the Chairman of the Joint Chiefs of Staff, has called the Confederate Generals have committed an act of treason. So he does believe that this issue needs to be approached. He does believe that the nation needs to discuss this and potentially change the names of those bases — and we’re talking in particular about 10 Army bases I think that really stand out, of course, all of them in the south. We’re talking, Fort Benning, and they’re all in the south. They’re mostly Army bases. But General Milley did weigh in, and Secretary of Defense Mark Esper, in sort of a delicate move issued a memo for the type of flags that the Pentagon and military facilities can display, and the Confederate flag was left out of that list. Didn’t specifically say don’t do it, but it’s not authorized. So therefore, he has weighed in a more sort of roundabout and delicate manner. Obviously, he has left other flags out, for example, the LGBTQ community’s upset because that flag is not listed on the memo as well, so it did rankle a few other people. But in general, he didn’t put the Confederate flag on that list to basically just make sure that he also doesn’t anger President Trump.

Tom Temin: And on the larger issue, do both versions of the Authorization Act authorize the same amount of money?

Roxana Tiron: They do, yes. And to specify this is the last year where we have a Budget Control Act, basically, where we have specific budget agreements on what the defense spending levels should be. It’s $74 1 billion to round it up. And both are authorizing at that level. And the defense policy bill also authorizes national security spending at the Department of Energy and military construction as well.

Tom Temin: And with respect to the veto threat from the White House. I mean, the White House frankly, has a little bit of a history of having a lot of bark than bite when it comes to bills. I mean, the President in the first budget he ever signed, said, this is the last budget I’ll ever sign like that, but it wasn’t. And so it could be that the veto threat is just that and that it could just go ahead and both him and Inhofe are kind of off the hook.

Roxana Tiron: It’s absolutely possible, and to be honest with you lawmakers aren’t that worried about it, they are worried about keeping a track. And we’re talking about this would be the 60th year. So it’s quite a good record, and it’s considered a must pass bill. That’s why you always see it being adopted in December because everybody sees it as a way to attract maybe other legislation, to keep it till the very end because it does authorize pay, and it authorizes hazard pay. And so it’s a very important bill. And since it’s passed for 59 years, sort of the pressure is on the lawmakers to pass it for 60 years. And it also depends on the outcome of the election. If President Trump wins, he might as well go ahead and veto it. Or if he loses. I mean we can’t really tell at this point, what he’s going to do, he was very forceful about his statements about removing the Confederate remnants and the Confederate flag. We know where he stands. He hasn’t changed his statements yet, but I think the Congress also has the votes to override the veto.

Tom Temin: Roxana Tiron is senior national security reporter at Bloomberg Government. Thanks so much for joining me.

Roxana Tiron: Thank you for having me. 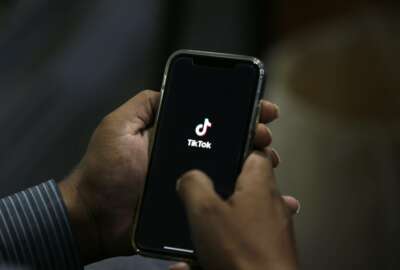