The signs on Capitol Hill are pointing to a budget deal for 2021. The question is whether they can get it done in time. The continuing resolution the government is operating under expires this Friday at midnight. WTOP Capitol Hill correspondent Mitchell Miller joined Federal Drive with Tom Temin for the outlook.

The signs on Capitol Hill are pointing to a budget deal for 2021. The question is whether they can get it done in time. The continuing resolution the government is operating under expires this Friday at midnight. WTOP Capitol Hill correspondent Mitchell Miller joined Federal Drive with Tom Temin for the outlook.

Tom Temin: So what is the prospect, Mitchell?

Mitchell Miller: Well, we certainly have a much rosier outlook than we have had for the last several months, Tom. It looks like they are angling toward that big Friday deadline. Of course, as we well know, Congress needs a deadline, needs a firm deadline to get anything done. And things really radically changed over the last week or so. And House Speaker Nancy Pelosi on Friday indicated that she’s really confident that they are going to put together a COVID relief package, which will of course be based on this $908 billion measure that was put together by both the problem solvers in the House as well as Senate Democrats and Republicans use that as the starting point to basically hash out a lot of things related to that, and then try to piggyback that on to the overall omnibus bill. Now, there’s obviously a lot of moving parts related to this. And it’s kind of a two-track issue right now, because over the weekend, many of the lawmakers’ staff members were busily trying to get some of the legislative language in that bipartisan framework started to be hammered out. And then ultimately, they hope to match these two together, bring them as she says, into one big vote, and hopefully get it done. Now there is some question about whether they can actually get it done by Friday. But they really have to, because as she said, they don’t want a continuing resolution. And this is one thing that she does agree with Senate Majority Leader Mitch McConnell, that they do want to get all of this pulled together. But certainly it’s a lot to pull together in the next few days.

Tom Temin: I’m thinking of those poor staff members working over the weekend, Congress really does know how to louse up the Christmas season, don’t they?

Mitchell Miller: They do indeed.

Tom Temin: And the president said a couple of days ago that he would sign that bill, if it got to him – the $908 billion package. When did we ever get to think $908 billion was the small size one but anyhow, nevertheless, that would be coming his way. So then basically, you’re saying it could be bundled into a $2.4 trillion bill, essentially?

Mitchell Miller: And so that’s an interesting figure, because that’s close to what the figure was that House Speaker Pelosi and Senate Minority Leader Chuck Schumer were holding firm to for many months now. And in fact, when House Speaker Pelosi was asked about this, and whether it was a mistake to hold to that position, she got pretty riled up and said, no it was not a mistake, that a lot of things have changed. And she pointed to the fact that two of the biggest factors in her view that have changed are, of course, that you have now this bipartisan proposal, but also more broadly, she says the fact that the vaccine is now coming along, and she says that is a game changer. And then of course, from the Democrats’ point of view, the fact that President-elect Joe Biden is now heading to the White House. She says that’s also a huge factor in turning things around, and why Democrats now are willing to go with this “smaller” bill that’s under $1 trillion.

Tom Temin: Yes, so that $2.4 I mentioned then is the trillion for the COVID relief, roughly, plus the $1.4 trillion regular discretionary budget for the rest of the government.

Mitchell Miller: Right. So actually, what we would have then if we do the math is we would have just under $1 trillion for the COVID relief, plus the, as you said, the overall omnibus of $1.4 trillion. So that gets us to close to $2.5 trillion. It’s interesting that President Trump has come around and said that he will sign this. He had been really pretty quiet about what Congress was doing since the election. And the fact that he weighed in last week and said that he would sign essentially, it sounds like just about anything that they agree to is I’m sure a big relief to a lot of Senate Republicans. There is still of course, some opposition to a lot of the parts that are in this bipartisan measure. A lot of Republicans don’t like the state and local, which is about $160 billion in that. And Democrats on the other side. They don’t like a lot of the liability restrictions that would be basically freed up in connection with the coronavirus. So they do have a lot of work to do over the next several days.

Tom Temin: So the only question is whether the president will sign it on the resolute desk or that little wee table he’s been sitting at somewhere else in the White House.

Mitchell Miller: Yeah, he took a little few slings and arrows on social media for that little mini table, didn’t he?

Tom Temin: Yeah, well, that table could be a collector’s item. After all of this. We’re speaking with Mitchell Miller, he’s Capitol Hill correspondent at WTOP. And does it look like the NDAA, which the conferees have wound up on, the National Defense Authorization Act – that’s pretty much safely done now. And the president will sign it or is there still the prospect of the veto over the Civil War names on some of the bases?

Mitchell Miller: Well, you know, the president still likes to dangle things out there and he didn’t really fully back off on this. From Congress’ point of view. They feel that they have essentially wrapped up the NDAA. They finished up the work late last week. Lawmakers pointing out, as you know, that they have done this now for this will be the 60th year in a row. So this is one of those kind of safe harbor budget items that always comes through. But President Trump, as you noted, has indicated that he would like to veto the language if they don’t repeal part of the Telecommunications Act known as Section 230. This is one that as you know, is getting a lot of attention, especially from conservative lawmakers who basically say that internet companies are being allowed to get away with a lot of liability, and in their view, actually are tilted a little bit to the left on a lot of issues with what’s going on in the social media landscape. But the chairman of the Senate Armed Services Committee, James Inhofe, and others along with him, other Republicans as well, as Democrats basically say, this is just a non-starter from the president that it doesn’t have any germane link to what has been done with the defense authorization bill. And even though this was kind of another thing that the president piled on top of what you mentioned, in connection with his objections related to the Confederate naming of the military bases and withdrawing those names over several years. So it does look like it’s going to move forward. That includes of course, a 3% pay increase for active members of the military. Also, it would allow federal employees to carry over an extra 25% of their annual leave next year due to the coronavirus.

Tom Temin: Yeah, that’s a welcome maneuver I think because a lot of people have skipped vacation. We hear this all the time from feds over here at Federal News Network. And one other in-the-weeds issue that never really did get resolved, at least from the Democratic standpoint is the tax payroll deduction deferral for Social Security taxes that the president imposed on military and civilian members of the federal workforce. As the sand runs out of this year’s hourglass, it becomes a pretty much a moot issue.

Mitchell Miller: It does. There was one last gasp effort basically by Maryland Sen. Chris Van Hollen who unsuccessfully tried to get the measure passed by unanimous consent that would allow federal workers and members of the military to choose whether or not to take that payroll tax deferral. Obviously, President Trump when he introduced that and pushed it really hard, he was trying to show that he was doing something for people and helping to cut their tax burden, if you will. But Van Hollen and other Democrats have argued that if private employers can opt out of this, then federal workers should be allowed to decide to do so as well. Many unions, as you know, representing federal workers point out that feds could get hit with more tax payments down the road that they don’t want to deal with, if they get this little bit of savings over the next few months. So anyway, the effort to make the tax deferral voluntary supported by many lawmakers here in the Washington area, but as you pointed out, the sand really has run out on this.

Tom Temin: And the sand is running out on the whole session, then, pretty much because now we are looking at the end of this week and then a couple of weeks till Christmas. Is that it for this Congress?

Mitchell Miller: It would be. It does look like they’re going to have to get everything done, as I said, by Friday. There are as you know, some last minute things that can come up. I don’t know if there’s something really big that explodes later in the week, could it cause them to have to somehow break up that merging of the two major pieces of legislation? But I think they really are trying to make sure that they get out of here with something that they can proudly point to their constituents and say we did this for you before the holiday season starts. So that’s certainly their goal at the end of this week.

Tom Temin: So the ugly snake of a government shutdown is still a possibility but sounds like they’ve got their boot heel on its neck.

Mitchell Miller: Exactly. They’ve really been trying to do that. Both on the appropriation side in the Senate, as well as now with this big amount of momentum on the coronavirus relief package.

Tom Temin: We’ll post this interview at FederalNewsNetwork.com/FederalDrive. Hear the Federal Drive on demand and on your device. Subscribe at Podcastone or wherever you get your shows. 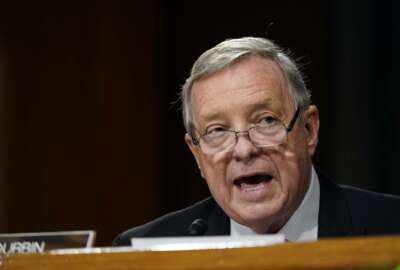