Government’s recent track record with IDIQ contracts has been spotty

The government’s recent track record with huge IDIQ contracts has been spotty at best. Of course, there’s the JEDI contract which has been bogged down in legal challenges for two years now. Another example: GSA’s cancellation this summer of the Alliant 2 small business contract with no clear replacement in sight. Our next guest says the problems...

The government’s recent track record with huge IDIQ contracts has been spotty at best. Of course, there’s the JEDI contract which has been bogged down in legal challenges for two years now. Another example: GSA’s cancellation this summer of the Alliant 2 small business contract with no clear replacement in sight. Our next guest says the problems around IDIQs are a sign of the times. Larry Allen is president of Allen Federal Business Partners and he joined Federal Drive with Tom Temin to share more.

Jared Serbu: And Larry, not to overstate things, but is the era of big IDIQs over?

Larry Allen: Jared, I’m not sure that it’s over but I do think that agencies that put out big IDIQs need to know that the era in which they launched a lot of these things is over. What I mean by that is agencies no longer have the luxury to take years to put together these large packages for companies to bid on. The government’s moving much faster, the industry is moving much faster, we need to have a more agile, to use a term, acquisition method in order for the government to get the technology ir needs. It’s not enough that it’s easy to buy from these large IDIQ contracts after they’re awarded. They have to be awarded more quickly as well.

Jared Serbu: Well, let’s talk about some of the main factors that causes that upfront acquisition practice process to take so long, I mean, one of them and I’m sure you’ve got others in mind. Seems to me is the insistence on doing competition at the contract level. That inherently is going to take time, right?

Larry Allen: It does. You do the competition where you’re looking at pricing. You’re also now increasingly agencies are looking to put so much up front on the contract or prove to us 10 different ways that you have the experience to do what we’re asking you to do on this contract. Of course, they’re trying to protect themselves against successful protests. Most of the time they prevent against successful protests but it’s the protest themselves, that you can never regulate that also add time to this. So – a more streamlined approach, to allow things to be constructed at the task-order level, whether it’s pricing or other things, as well as finding a way to limit protests would certainly speed up this process.

Jared Serbu: Talk us through some of the consequences both for agencies and for companies of having this IDIQ process dragged out for so long.

Larry Allen: Well, the ultimate consequence, we’ve just seen an example of earlier this year, when GSA had to cancel the Alliant 2 small business procurement. Because it could never get out of the protest phase. They had awarded the contracts, there had been pre-award protest, there have been post award protests, but they could never get themselves out. So the ultimate outcome can be that the agency has some thousands and thousands of hours into preparing this contract, they’ve got a lot at stake. They’ve gone out to try to tell customer agencies, hey, this is coming. You should wait for it before you make some buys. On the industry side, industry can spend seven figures and sometimes well into the seven figures, Jared, to prepare for this to run capture management to obtain the contract to put the necessary controls in, to identify partners, all to have that investment just disappear in front of your face without anything to show for it. It’s not going to take a lot of those to happen before industry is decides to say well wait a minute: If I can do business with my government customers some other way where it’s not this all or nothing type of venue that’s being marketed to me, I’m going to find this other channel, that’s lower risk, that’s more immediate. We’ve seen that happen in DoD, where DoD agencies and vendors come together to buy cloud services, while they took two-plus years to figure out what was going to happen with JEDI. I think that’s an example of the type of thing we can see more of, if there’s a sense that this agency has told me that if I don’t get on this one contract, my business is going to explode in front of me and none of my federal customers are going to want to talk to me again. We can’t say that. A series of smaller contracts that have limited defined scopes that aren’t clearly so stark as win or lose – there’s such a thing as live to get into contract another day. That’s the type of approach we need in order to maintain the benefits of the IDIQ contract, and there are lots of benefits once the contract gets in place.

Jared Serbu: What has changed in this current era to make it more likely that these things are going to get held up by protest? Because we’ve obviously had successful large IDIQs in the past, like the original Alliant, for example, and those were high stakes, too, right?

Larry Allen: They absolutely were high stakes, Jared. And, you know, I think what’s changed is the industry and the marketplace – market is demanding current solutions more and more, you’ve seen this this year just with cybersecurity controls with Section 889, telecommunications compliance, but also the desire to have zero trust-type of solutions come out. These are things that emerged faster and faster. Even last year, if we were having this discussion, it would have been AI and machine learning. Next year, it’s probably going to be something else again. And you can’t have a vehicle that is under construction, while three technology trends come and go, before you finally are ready to come out with it. Because the market will move past you by that time.

Jared Serbu: All right, let’s pivot quickly to another topic as we wrap up here, Larry. I think a lot of our coverage and others coverage is kind of marveled at how well the acquisition system around COVID has worked over the past few years with everybody, teleworking, etc. But there was always going to come a point where oversight of that process was going to take center stage and I think we started to see little glimmers of that last week in the Post report on on a billion dollars possibly misappropriated by DoD. You say that’s just the tip of the iceberg.

Larry Allen: Jared, I do think it is the tip of the iceberg. This is a Washington Post report that came out recently showing the Department of Defense, instead of using $1 billion worth of CARES Act money on COVID relief instead used it for more traditional DoD purposes. That talks to how the acquisition system works and the internal issues with trying to get bonafide needs met through traditional acquisition methods. But nevertheless, we have some money that was diverted here that Congress intended to be spent in one place and it was spent in another. I suspect, we’re probably going to see more oversight, not just from the Post. In fact, there is a group of inspectors general that came out late last week with their own report that said, you know, we think this is an area that is ripe for further investigation, to make sure that the money that was allocated for specific purposes went to those purposes. Jared, we’ve seen this opera play out before. We’ve seen it in Iraq and Afghanistan, where there was a significant ramp up in Defense dollars to support military operations in those parts of the world. And there are people who just took advantage of the system and decided that they were going to do something else with the government’s money than what the government wanted them to do. Anytime the government appropriates large amounts of dollars, we’re probably going to see actors come in who want to use that money for their own purposes. What I’m telling people is that contractors have to be aware that while your government customer agency may be called on the Hill or to the IG to explain what they did with the money, you the contractor aren’t going to be immune from the process. At some point contractors are going to have to be ready to show: Yes, we got this money. Here’s how we got it. Here’s why we think that’s appropriate. Here’s what we did with the money that was appropriate. So contractors have to be prepared. They’re the lowest rung on the ladder, Jared, when it comes to oversight. They’re the ones that typically everybody gets to point a finger at. So what I’m telling companies is you just better be prepared for that to move closer to center stage in 2021 when I think a lot of the oversight on coronavirus spending is going to ramp up.

Larry Allen: Jared, thank you and I wish your listeners happy selling.

Jared Serbu: And you can find this interview at FederalNewsNetwork.com/FederalDrive.

The future of IDIQ contracts 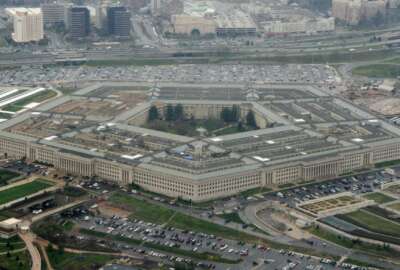