The General Services Administration is still in the process of consolidating its Schedules program into a single procurement vehicle. And although it’s undoubtedly one of the biggest changes in the program’s history, there’s a lot else going on with the Schedules that vendors need to be paying attention to. To talk more about it, we’re joined by...

The General Services Administration is still in the process of consolidating its Schedules program into a single procurement vehicle. And although it’s undoubtedly one of the biggest changes in the program’s history, there’s a lot else going on with the Schedules that vendors need to be paying attention to. To talk more about it, we’re joined by Larry Allen, president of Allen Federal Business Partners.

Jared Serbu: All right, Larry, and as you point out in the newsletter, there’s a lot going on with schedules right now beyond consolidation. Let’s go through the three things that you mentioned. One is the schedules roadmap that they have now published. Talk us through what that is, and why you think it’s helpful.

Larry Allen: Jared, I think that the roadmap in and of itself is important. But I also think it’s indicative of the larger efforts that GSA is making, to try to make it easier for first time companies to get on the schedule. The roadmap is basically what it says it is. It’s like a non-digital GPS, if we can go back and use reverse technology. It lets companies know what’s going to be required of them so they have an idea of what they need to do when they’re putting an offer together for GSA. And then it tells them what’s going to happen in basic steps. Once they submit their offer, you know how they’re going to negotiate the fact that GSA will negotiate. I think that the roadmap is a useful piece of information for companies to have, it goes some way towards demystifying the schedules process. And that’s really been a priority for GSA’s current leadership.

Larry Allen: Consolidations changed the entrance process in that the company responds to one unified solicitation. I think the roadmap comes in handy. Because even though you might have a company that’s a first time applicant for the schedules, Jared, people, the actual people probably have worked or may have worked on a scheduled contract before or may have heard about a scheduled contract number like the IT-70 schedule. And of course, that’s all been done away with via consolidation. The roadmap kind of makes that clear, doesn’t come right out and say, hey, we did away with everything. But what it does say is, this is what you have to go do. And this is where you have to go in order to get started on your journey.

Jared Serbu: And the other thing you mentioned that they’re doing is expanding the Startup Springboard option. What is that and why is it helpful?

Larry Allen: Jared, Startup Springboard is a program that allows companies with fewer than two years and in some cases, they had required three years of experience depending on the contract you’re applying for. And even though they have a lot of experience, because their companies had been in business for, say 18 months, they couldn’t apply for a schedule contract. Well, now they can Startup Springboard was started on the IT schedule several years ago, as a way to give those newer companies a way to enter the schedules program, a lower barrier to market entry, if you will. And the idea was that GSA should be able to take these largely small businesses, particularly if they’re offering innovative products and solutions. Have them obtain the schedule contracts so that federal agencies would be able to more easily access those companies. And the companies themselves would have an easier access to government business.

Jared Serbu: And in your experience, what does GSA actually want to see from a company or a company’s leadership to decide whether they’re the right fit for the Springboard?

Larry Allen: I think there are a couple of basic things, Jared, they’re not all that different from a company that’s been in business for longer than a couple of years. I think they want to see what type of experience or expertise does this company have? Does it have something significant that’s new? Are there people associated with a company that have done government contract business before? That type of thing. They definitely also want to see evidence of financial stability. Everybody gets a financial review, Jared, before you get a schedule contract. No different here with Startup Springboard, you would want to make sure that if you’re awarding a contract to a company that, you know, they’re not going to just close up shop six months later and not be able to serve a government customer. So it’s those types of things: stability, any type of experience as broadly defined, previous experience with other ventures, that type of thing. That’s what GSA is really looking to see.

Jared Serbu: And then the third sort of reform you talk about here is the expansion of the ability to use the transactional data reporting method to get on the schedules in the first place? How does that work? And you mentioned you were skeptical of that early on, why?

Larry Allen: Jared, I was a big skeptic of transitional data reporting or TDR, as you mentioned, originally, and that was because I’m always concerned about the type of data company provides to the government, and whether or not it’s being deemed accurate, current and complete, which is a requirement through the traditional schedules process. But TDR has proven itself to be a very flexible way through which companies can either obtain or renew their GSA schedule contract without having to supply reams of commercial sales transaction information.

Transactional data reporting is kind of another lane on the schedules highway. And that lane allows companies to propose for a scheduled contract without having to collect information on all their commercial sales practices. It allows the contracting officer at GSA to conduct market research use some of the price comparison tools that GSA now makes use of and then maybe ask for a small amount of information if they need it. In order to validate the reasonableness of the prices being offered by companies that use the TDR route. One of the neat things is with consolidation, GSA is gradually expanding the scope of TDR so that more contracts and more contractors will be eligible for that program that still retains some part of the schedules price reductions, pause, Jared. So I want to make that clear. Any data that a contractor provides still has to be accurate and current. But there’s no trigger for most favorite customer pricing, a real schedule compliance issue that has been bedeviling contractors for at least as long as I’ve been with the program.

Jared Serbu: Does that market research process put more of the burden on GSA and lengthen a decision process? Or is it roughly, roughly the same on the agency side?

Larry Allen: You know, I think Jared when GSA first launched TDR, the probably was a slightly longer process, because contracting officers who had been used to awarding contracts the traditional way, suddenly add this new option. Over time, we’ve seen the requests for contractor provided sales information be reduced. I don’t think they’re eliminated, I would never go that far. But at the same time, GSA itself has created new price comparison programs. Now industry can talk about just how accurate they think those programs are. But the fact is, these are new tools that GSA has at its disposal. And additionally, contracting officers now have a few years of experience awarding TDR contracts. And they know that they’re not going so long as they do all the things that they’re supposed to do and exercise their due diligence, that they’re not going to get called on the carpet for making a bad decision.

Jared Serbu: All right, lots of interesting stuff going on in the schedules program. Larry Allen, president of Allen Federal Business Partners, thanks for taking us through it.

Larry Allen: Jared, thank you very much for your time, and I wish your listeners happy selling.

GSA, DIU working together to get non traditional contractors on board 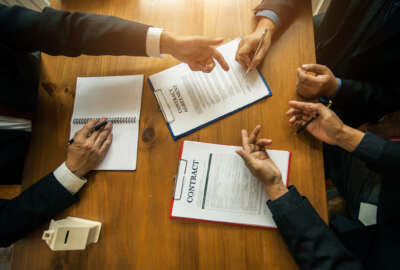