The survey, which is conducted every two years, said that the number of students at the Army, Navy and Air Force academies saying they experienced unwanted sexual contact increased by nearly 50 percent over the 2016 survey and more than half of the incidents involved alcohol.

Detailed information about alcohol use, which has long been tied to sexual assaults, is included in the survey for the first time. And it found that nearly a third of male students and 15 percent of females said they drink heavily, meaning that on a typical day they would have five or more drinks.

In addition, a quarter of the women and 28 percent of the men said that at least once in the past year they had drank so much that they couldn’t remember events from the night before.

Defense officials said they are frustrated and disheartened by the results, particularly the pervasiveness of the misconduct and the alcohol problems. They said they are hoping new programs and policies being developed by the services will help stem the bad behavior, but some earlier efforts to beef up alcohol education were not effective.

For example, training that gave students dinner and three drinks on their 21st birthday and then provided information about alcohol use and breathalyzer tests seemed to have no impact on future behavior, officials said.

Nate Galbreath, deputy director of the Pentagon’s Sexual Assault Prevention and Response Office, said the three military services understand that high alcohol use is a key factor, and they are trying to come up with better ways to educate the students, encourage bystanders to step in, and deter the assaults. He said it is difficult because many of the encounters happen after hours and off campus.

According to the survey, in nearly half the cases women victims said that they thought the assault could have been stopped by a bystander.

The report appeared to trigger greater dismay from senior leaders this year.

In past years, defense officials have said an increase in reported assaults was a sign that more students felt comfortable coming forward. And the goal was to see the number of reports grow to a level that was closer to the number of assaults reported anonymously in the survey.

This year, however, reported assaults increased from 112 in 2017, to 117 last year. But the survey results showed a sharp spike in assaults, with 747 students saying they had experienced unwanted sexual contact last year, compared to 507 the year before.

“There has not been the change that we wanted to see over time,” Galbreath said.

Changes in how the military addresses kid-on-kid sex assault 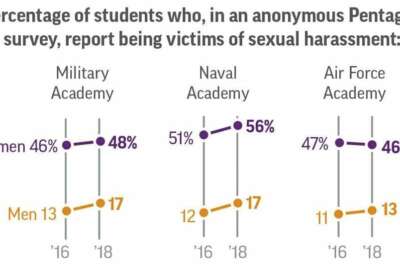