The Pentagon wants to develop a new system of public-private partnerships on the way to eventually buying all of its space launch operations as a service in what it hopes will be a vibrant commercial space market sometime in the next decade, officials said Wednesday.

DoD thinks the approach would create competition in the space launch business and simultaneously end the U.S. military’s reliance on Russian-made RD-180 rocket engines, something both the Pentagon and Congress...

The Pentagon wants to develop a new system of public-private partnerships on the way to eventually buying all of its space launch operations as a service in what it hopes will be a vibrant commercial space market sometime in the next decade, officials said Wednesday.

DoD thinks the approach would create competition in the space launch business and simultaneously end the U.S. military’s reliance on Russian-made RD-180 rocket engines, something both the Pentagon and Congress see as urgent given deteriorating relations between the two countries.

The department expects to release a request for proposals by the end of this year in preparation for awards sometime in 2017.

The basic idea is to provide up-front money to multiple upstarts to cover the initial costs of building top-to-bottom launch systems that meet the military’s specifications. Qualifying companies would then compete for individual launches of military satellites. From there, the theory goes, demand from commercial firms who want to use the same space companies to launch satellites of their own will bring the government’s costs down over time.

“The exact form of these business arrangements will vary, dependent on the unique needs of each launch service provider,” said Frank Kendall, the undersecretary of Defense for acquisition, technology and logistics. “The responses we’ve received from our formal requests for information tell us this concept has a real chance of success. In most acquisition strategies, the department specifies the product or service that it desires and industry bids to provide the specified deliverables. In this case, industry will have an important role in defining the terms of the contract. Each selected launch service provider is expected to offer unique terms that will have to be negotiated. The competitions will be conducted on a best value basis. The best value determination will take a number of factors into account.”

Kendall said the factors would include whether the commercial space industry could meet the military’s needs without Russian engines, the technical risks involved in building their systems and whether they could compete in the commercial marketplace without DoD funding.

But the strategy would require Congress to change existing law, something no members of the Senate Armed Services Committee expressed particular eagerness to do when Kendall presented the plan during a Wednesday hearing.

In last year’s defense authorization bill, lawmakers made clear that they wanted DoD to put a laser-focus on finding a replacement for the Russian engine as quickly as possible.

“Russia holds many of our most precious national security satellites at risk before they ever get off the ground,” said Sen. John McCain (R-Ariz.), the committee’s chairman. “The benefits to Vladimir Putin, his network of corruption and the Russian military industrial complex are also well known. Yet despite the availability of alternatives, a select few still want to prolong our dependence on Russia while they target our satellites, occupy Crimea, destabilize Ukraine, bolster Assad in Syria, send weapons to Iran and violate the 1987 Intermediate Range Nuclear Forces Treaty.”

The RD-180 is used to power the Atlas V rocket, operated by the United Launch Alliance, a joint venture between Boeing and Lockheed Martin. ULA had a near monopoly on military space launch for almost a decade until the Air Force certified a version of SpaceX’s Falcon rocket for military launches in 2015. The defense authorization bill ordered DoD to come up with an acquisition approach to replace the RD-180 with one made by the U.S. or its allies.

Separately, ULA has already started work with the Washington state-based company Blue Origin to build a replacement for the Russian engine, but the Air Force doesn’t believe it will be able to certify the system until the early 2020s.

And Defense officials don’t think it’s wise to focus their resources on a replacement engine that could only be used on the Atlas, which is almost 50-years old.

Deborah Lee James, the secretary of the Air Force, said developing a clone of the RD-180 would cost about $3 billion and would benefit only one company: ULA.

“An engine doesn’t get us to space,” she said. “We need an entire capability, not just one single component. If we were to continue down the path of funding rocket engines alone, we believe this effort would benefit only one launch service provider, which we don’t really believe is anyone’s intent.”

But even DoD’s preferred approach wouldn’t introduce a new crop of space companies into the military market until 2022 or 2023. In the short term, the department thinks it would be unwise to limit ULA’s purchases of the Russian engines.

Kendall said the result could be pushing the Boeing-Lockheed consortium out of the military launch business altogether.

“ULA has only done one competition against SpaceX so far, but ULA is disadvantaged in that they have an older system. They have to bid with the systems that they have,” he said. “We’re concerned that going forward they will not be very competitive. They recognize that, and they know they need to get to a more efficient and affordable launch system, and they’re trying to get on that path. Their viability and their ability to do that depends on them having continued business over the next few years.”

And that business probably depends on ULA continuing to use Russian engines, since the consortium’s only other rocket, the Delta IV, costs millions of dollars more per launch than the Atlas, Kendall said, meaning it could not win many competitions against SpaceX’s Falcon.

“If we stopped using the 180s, it’s questionable as to whether or not ULA will be able to remain in business. SpaceX would be the default almost automatically, so we could very well be back in a situation with only one launch service provider. We’re not comfortable with that risk,” he said.

One additional factor that could lead to a role-reversal — with the upstart SpaceX replacing ULA as the government’s only launch provider — is the fact that ULA is no longer getting $800 million in annual payments to cover the fixed costs of running the only space launch systems that met the military’s specifications.

McCain contended that the billions of dollars of costs involved in those contracts over the past several years amounted to an unfair subsidy.

“This is really, really, remarkable,” he said. “Some of us are surprised for some reason that our taxpayers get angry and think that we are not working for them in Washington, but we’re paying a company $800 million a year just to stay in business. And then they don’t even bid on the next launch.”

McCain was referring to ULA’s decision not to bid on the Air Force’s upcoming contract to launch its next generation of GPS satellites despite the annual payments, which were expressly intended to fund the consortium’s day-to-day costs at a level that could up support up to eight launches per year whenever the government needed them.

DoD says that contract structure was made since in a sole-source environment, but that future competitions will be required to price those fixed costs in, launch-by-launch.

James said she was also “surprised and disappointed” that ULA had opted not to bid on the GPS contract, and that Air Force lawyers were examining legal remedies. 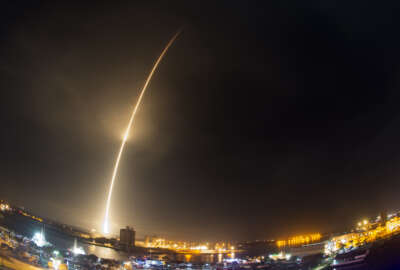