Digital Transformation – The Consumerization of Government IT

No matter how you define it, digital transformation is more about strategy and less about the technology.

Forrester research came up with a digital transformation playbook that helps organizations build a strategy around four steps:

No matter how you define it, digital transformation is more about strategy and less about the technology.

Forrester research came up with a digital transformation playbook that helps organizations build a strategy around four steps:

Many times those stumbles come from not listening to citizen or customer needs. A 2016 PricewaterhouseCoopers survey of over 1,400 CIOs found 84 percent stated they needed to address wider stakeholder needs and 77 percent found that technology was one of  the top 3 influencers transforming stakeholder expectations for the business.

The other two likely are customer expectations and the needs of the business or mission areas.

These expectations, of course, include mobility where users can access data and apps from anywhere, at any time.

The U.S. Digital Service put those expectations at the top of their Digital Services Playbook. The first play: Understand what people need; The second play: address the whole experience from start to finish; and the third play: Make it simple and intuitive.

All of these are easier said than done and that’s why the need for transformation must include all stakeholders from technology to mission to finance to acquisition to human resources.

A successful transformation comes from the collaboration to reengineer processes and services.

Guy Cavallo joined SBA as the Deputy CIO, moving from TSA where he was the Executive Director for IT Operations.  His career has been almost evenly split between the private and public sectors.  Before rejoining the federal government, he spent 13 years in the private sector specializing in implementing new technologies in government organizations, with nine of those years as a Senior Government Technology Advisor at Microsoft Corporation.

Earlier in his career his private sector experience included starting his own small business to develop and deliver computer training for business users.  His firm, Executive Computer Training Centers, was recognized by PC Week magazine as one of the nation’s leading training companies at the time.

Cavallo’s previous government leadership positions at TSA, the Corporation for National Service, the Securities and Exchange Commission, and the City of Charlotte, NC have provided him with an extensive government enterprise technology background to bring to the SBA Deputy Director’s role.   At TSA he led the transformation of the IT organization from being hardware and data center centric to being customer focused using innovative technology solutions based such as the cloud and agile practices.  At the Corporation for National Service he led all technology efforts in the launch of this new federal agency.  At the City of Charlotte, NC he revamped the entire IT organization and successfully led the updating to current technologies in an organization that was significantly behind the times.

Throughout his public and private sector careers, Cavallo has been recognized as an innovative technology leader and has received numerous awards, including winning seven major customer awards at Microsoft and being selected for the Federal 100 for his accomplishments at the Corporation for National Service.  Since returning to the federal government, he has been nominated for the FedScoop 50 awards for being a: Technology Disruptor (2016); and for Federal Leadership (2015).

Mark Schwartz is the chief information officer of USCIS. One of his key goals is to increase the organization’s responsiveness to mission needs by reducing time from concept to deployment for new capabilities. To support this goal, Schwartz has introduced such practices as Agile and Lean Development, Continuous Delivery and DevOps. He also leads efforts across DHS to introduce Agile information technology approaches.

In 2015, Schwartz received the AFFIRM award for Leadership in Technology Innovation and an Amazon Elite 100 award. Before this position, Schwartz was the CIO of Intrax Cultural Exchange, where his innovative Family Room application drove dramatic market share, revenue and profit growth. In 2006, CIO Magazine recognized this accomplishment with a CIO 100 award. In 2010, he was named one of the Premier 100 IT Leaders by Computerworld Magazine.

Michael Hermus is the Chief Technology Officer (CTO) at the Department of Homeland Security (DHS), working within the Office of the Chief Information Officer (OCIO). He assumed this position on June 15, 2015.

Prior to his arrival at DHS, Mr. Hermus worked in the private sector. He was the Chief Product & Technology Officer for House Party, Inc., a social marketing platform that leverages data and open source technology to build brands and increase sales. Previously, he was CTO for FirstCarbon Solutions, directing product design, development, and operations for its sustainability software product line. Prior to that, he cofounded and served as CTO for two software companies, Enverity Corp. and MarketXT, Inc.

Mr. Hermus earned both his Bachelor of Science and Master of Science at the Massachusetts Institute of Technology.

Adam Clater is the Chief Cloud Architect of the Office of the Chief Technologist of Red Hat’s North America Public Sector organization. He works internationally with federal agencies, integrators and Red Hat partners & Communities to promote and define the use of enterprise open source solutions.

Adam has experienced first hand the evolving role that I.T. has played in the federal government for nearly two decades, starting with his role as a Systems Administrator at the U.S. Patent and Trademark Office in 1997.

Prior to joining Red Hat, Adam was a senior architect, system administrator and lead for a variety of commercial and government agencies including: Lockheed Martin – U.S. Army, The National Education Association,RSA Security, AOL/Time Warner. 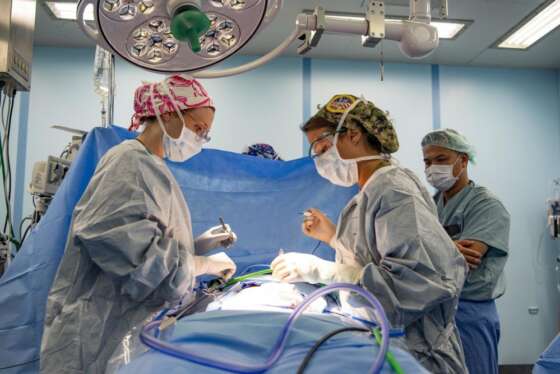 Surgery on the high seas