Walter Shaub’s departure as director of the Office of Government Ethics leaves not only a vacancy in an already small office, but a big question mark as to who will take the reins of a relatively unknown agency thrust into the spotlight thanks to its combative relationship with the new administration.

The federal workforce and presidential appointees are familiar with the office, but outside the government realm, OGE only existed after the November election, when Shaub issued a...

Walter Shaub’s departure as director of the Office of Government Ethics leaves not only a vacancy in an already small office, but a big question mark as to who will take the reins of a relatively unknown agency thrust into the spotlight thanks to its combative relationship with the new administration.

The federal workforce and presidential appointees are familiar with the office, but outside the government realm, OGE only existed after the November election, when Shaub issued a series of tweets and made public comments on potential conflicts of interest related to President Donald Trump.

Whether the feedback was heroic or a misstep is debatable, but ethics and public service experts agree OGE’s newfound attention and its clash with the administration are unlike anything they’ve witnessed before — though whether that will continue under the office’s new leadership remains to be seen.

“They really are not designed for the public-facing activity that they have been pulled into in this transition and in the front end of this administration,” said Max Stier, president and CEO of the Partnership for Public Service. “That’s not their expertise, and, in fact, it pulls some of their talent away from the job, from actually reviewing the ethics packages. I don’t think Walt Shaub or anyone else in that office received much training in this, and they were in some real sense accidental participants in the public and political debate.”

Stier said engaging with media wasn’t Shaub’s preference nor will it likely be his successor’s, but much of that will depend on whether the administration has learned how to interact with the office and manage their own process of ensuring their nominees are entering “sensible ethics agreements.”

“I think the administration has already learned a lot,” Stier said. “Sometimes it learned it probably the hard way. I would expect that the responsibility of the next OGE director will be quite a bit different than Walt’s. I think the bigger challenge for them is going to be in continuing to process what is a very large workload with a very small team.”

According to OGE’s fiscal 2018 budget justification, the office operates with fewer than 80 FTEs. OGE requested about $16 million in funding.

Stier pointed out that while the director position is presidentially-appointed, Shaub was a career ethics lawyer with OGE. He worked there as a staff attorney from 2001-04, as a supervisory attorney responsible for OGE’s presidential nominations program from 2006-08, and he served as deputy general counsel from 2008-13. He started his five-year term as OGE director in January 2013.

Shaub announced his resignation in a series of tweets before making the rounds on various political talk shows.

Kathleen Clark, an expert on legal ethics and whistleblowing, and professor of law at Washington University in St. Louis, said she hoped the people leading the office in the interim would “be as courageous as Walt Shaub has been able to be.”

“I would imagine that the remaining employees at the office will be diligent in doing their work and attempting to assist nominees in preparing for the confirmation process, giving them the feedback that they need regarding their financial disclosure forms, and so on,” Clark said, adding she believed it is essential to have someone nominated by the president and confirmed by the Senate who can follow in Shaub’s footprints of confronting the administration on potential ethical missteps.

One such example occurred in February, when Shaub urged the White House to investigate presidential counselor Kellyanne Conway for violating an ethics law when she made comments about Ivanka Trump’s clothing line while she was interviewed in the White House’s James S. Brady Briefing room and in front of the White House seal and an American flag.

“OGE is generally not a place where investigations happen for the most part. It is not primarily an enforcement agency. It’s instead an agency that focuses on preventing problems, and helping government officials comply with the government ethics standards,” Clark said.

Stier had similar sentiments when it came to preventing problems. The conflict that exists between the Trump administration and OGE is not good for either party, because OGE is a vital piece of the larger puzzle the administration is looking to solve in getting its nominees placed.

“This administration is pretty far behind in getting their people in place and there are a couple small pipes they have to go through and one of those is OGE,” Stier said.

Stier said the first year of an administration is usually a bit crazy, because of the turnover in political appointments. That’s in part what makes OGE’s work so important.

“I think the important piece here is that the institution of the Office of Government Ethics continues forward, and while Shaub’s departure is a loss for that office, the work of the people there continues forward,” Stier said. “And so my expectation is that you’re not going to actually see much of a change. The lawyers and the personnel at the OGE are there actually to help the new political team avoid potential problems. They’re not an enforcement organization, they’re there to assist the people, to make sure that they don’t get themselves into trouble.” 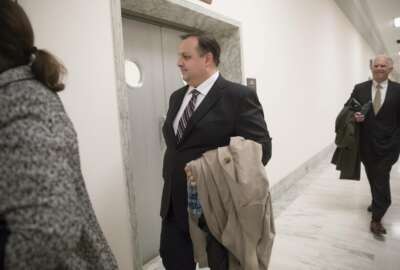