The Trump administration on Thursday ordered federal agencies to abandon dozens of one-by-one business agreements with package delivery companies, saying they must begin using a governmentwide contract administered by the Defense Department for most of their shipping needs.

The Office of Management and Budget said the new mandate to consolidate the government’s shipping bills under DoD’s Next Generation Delivery Services (NGDS) contract is “effective immediately,” but the agreement the department negotiated with major package shippers doesn’t actually take effect until Oct. 1. The Pentagon said agencies should plan to transition to the new contract “immediately upon availability.”

In announcing the change, OMB said it made no sense for federal agencies to continue to maintain their own distinct pricing agreements with shipping vendors. There are roughly 100 such contracts  as of now, but 90 percent of the $358 million the government spends each year winds up in the pockets of three companies that dominate the global package delivery industry: UPS, FedEx and DHL.

“These contracts are awarded and administrated across multiple agencies, which limits the application and benefit of comprehensive demand management practices, resulting in increased expense for the government,” Dustin Brown, the deputy assistant director for management and Leslie Field, the deputy administrator for federal procurement policy wrote in a joint memo to agencies. “There is tremendous opportunity to improve the way the government both buys and manages domestic and international package delivery services by implementing a category management strategy.”

Agencies will have until Sept. 1 to draw up transition plans to consolidate all of their package delivery spending under DoD’s NGDS. But the new approach does allow for some exceptions.

For example, agencies will be allowed to enter into their own agreements with the U.S. Postal Service if they need to use USPS in order to meet “unique mission needs” or if they’re required to do so by law. Agencies can opt out of NGDS for other reasons – including when they can prove to OMB that they can get better pricing with their own contract, that the DoD contract won’t meet their needs, or that using the new vehicle would jeopardize their ability to meet their own small business goals. In those cases, the head of the agency would have to send  OMB a justification six months before the agency signed its own contract with a package delivery company.

The Pentagon said in April that it had structured NGDS with input from a cross-agency team with the expectation that it would be used governmentwide, and the General Services Administration has deemed it a “best in class” contract as part of its category management approach to centralizing government purchasing.

OMB said making NGDS a mandatory-use contract would also give the broader government better insights into its spending on shipping services.

“This information helps agencies understand when they should, for example, consolidate shipments versus shipping a package individually, or use ground delivery versus express shipping,” Brown and Field wrote. “Focused management attention in this area can produce significant savings. For example, the previous generation shipping solutions achieved, on average, a 73 percent savings by using the more economical ground service instead of air express service, while still meeting delivery requirements, and a 33 percent savings by shifting from a next day morning delivery to a next day afternoon delivery.”

OMB also set specific governmentwide use and savings targets for the new contract. In 2018, the office wants 90 percent of all of the government’s shipping to be done through NGDS, expects agencies to eliminate 58 separate contracts, and hopes to save $32 million. The following year, OMB wants 95 percent of the government’s business to use the new contract and hopes to save $36 million.

Under NDGS, which will be administered by U.S. Transportation Command, the Pentagon made three separate, five-year, indefinite-delivery/indefinite quantity awards: One each to UPS and FedEx, both with estimated values of $2.35 billion, and one to Polar Air Cargo – a partly-owned subsidiary of DHL – for $199 million. 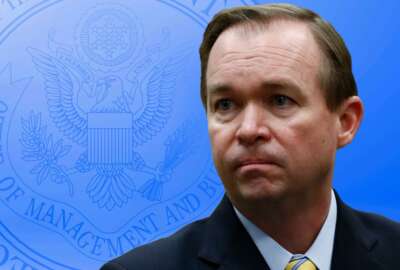