The Department of Housing and Urban Development made a 180-degree turn in how it manages its finances.

Over the last two-plus years, HUD transformed its financial management systems, workforce and overall data to bring more value than maybe ever before.

Irv Dennis, HUD’s chief financial officer, said the changes to make HUD a picture of financial health didn’t happen overnight nor by accident. He said the agency transformed its financial processes with a combination of...

The Department of Housing and Urban Development made a 180-degree turn in how it manages its finances.

Over the last two-plus years, HUD transformed its financial management systems, workforce and overall data to bring more value than maybe ever before.

“I thought this would be a three-to-five year plan, and with the strong vision we had and the detailed plans we put in place, and the buy-in from our team and the support we had from outside contractors, we were able to turn this around and get it in place in three years,” Dennis said in an interview with Federal News Network. “We were probably last among the cabinet agencies as far as financial infrastructure compliance. Today, we are a leading practice. We get calls from other agencies on how we’re doing things, especially in the data analytics and robotics areas, and CARES Act fund, and the processes we put in place on that. So it is a huge turnaround and I know one of the secretary’s objectives was to improve operations and improve controls to focus on preventing fraud, waste and abuse with taxpayer funds, and happy to say mission accomplished in many ways.”

And HUD’s financial management transformation was far and wide. When Dennis joined the agency in early 2018 in the Senate confirmed position, he found an office that was struggling to meet its mission.

HUD’s financial audits included four disclaimers, which means there’s areas that can’t be audited, and nine material weaknesses. The agency also was not in compliance with any of the financial reporting mandates such as for the DATA Act, several different improper payments acts and internal controls. HUD also had tens of millions of dollars in open grants, where program offices made an award to a grantee and never made sure it handed out all the money or closed the award.

Struggles were not new

Dennis said there were many reasons why the CFO’s office was struggling. First off, the leadership during the Obama administration was lacking with the CFO role being vacant for several years.

“HUD did not have strong governance policies. All the programs, Federal Housing Administration and Ginnie Mae, operated in silos as their own little entity. So when a program makes a change to a business process or an IT system that impacts of financial reporting, there wasn’t a lot of coordination between that activity and the consolidated financial statements,” Dennis said. “One of the things I put in place pretty quickly was a governance structure. We branded it the agencywide integrity task force. It was all of the program leaders, assistant secretaries and the C suite leaders, and FHA and Ginnie Mae. We met once a month and talked about things that were important to HUD from a business process and financial process improvement. That governance structure we put in place was very helpful to break down those silos.”

Dennis added that his goal wasn’t to focus on the best ways to remediate disclaimers and the material weaknesses, but to put in place a detailed financial transformation plan that included automation, robotics and more emphasis on the shared services that the Treasury’s Administrative Resource Center provides HUD.

“We had a detailed plan and resources we needed from Congress. We got contractors in place, and we got our people focused, and we held everyone accountable,” he said.

In December, that plan and two years of effort paid off.

HUD received an unqualified, clean audit for the first time in eight years, meaning Dennis and his staff fixed the disclaimers and material weaknesses.

“We had about $70-to-$75 million that was locked up in that. We opened that up, and some went back to the Treasury, and some were able to repurpose, so it was a success story and putting a process in place to not let that happen. I think we’re now down to about 256 open grants and most are small dollars,” he said. “Our approach was just to list it out, tackle what we can quickly and stuff that’s a little longer term, maybe … can be remediated with more sophisticated automation techniques. We’re continuing the process of that, but it was really just understanding it and putting a strong focus, getting our people bought in and getting the programs bought in.”

Dennis said he had to convince the programs that the CFO office does more than just roll up the numbers.

“We had to change some of the business processes and some of the behaviors of the programs at Ginnie Mae and FHA, and once they understand what we’re trying to accomplish and understand the vision and understand the value of having strong financial controls, one thing I was really pleased with the people at HUD got it and they bought into it,” he said. “That was really important to the success of this. We have a lot of smart people at HUD, people very much understand are driven by the mission.”

The other piece to the puzzle was the addition of robotics process automation with the help of experts from EY.

Dennis, who spent 36 years at EY before joining the government, said the contractor helped identify and put in place the RPA software and processes to begin to eliminate low-value, manual work.

“We did a small robotics process automation effort where we took a 2,600-hour manual process and knocked it down to 65. I can’t tell you how that energized our people. They were told to come back with a list of other areas that we convert from manual to robotics, and they saw that they’re being more efficient, more effective, and be able to go home at 6:30 at night versus 10 p.m. because they were no longer pushing numbers around,” he said. “It was really quite fun to watch that transformation and our people’s attitude.”

Bill Colbert, a partner with EY, said their goal was to support HUD’s center of excellence to drive automation further into the business processes.

“The journey that HUD has been on from an intelligent automation perspective is one of the more ambitious ones that we’ve seen in federal government,” he said. “There are a lot of agencies that have been reaching out to HUD to talk with them, Irv and I are going to be connecting with CFO from another agency, after the first of the year, on a very similar topic.”

Dennis added HUD now has identified 50 to 60 processes within the CFO office that could take advantage of RPA, including several processes to help the agency manage and oversee money from the pandemic relief bills.

“There’s some reporting requirements at the program level that we were not necessarily ready for. It’s not just a reporting at HUD to the grantee, the public housing agencies (PHA), but it’s the sub-grantees and sub-recipients that there’s some reporting on and we knew that was going to be an area that we’re we were weakened early on. We knew it was an area we had to focus on,” he said. “What we did with the project management organization out of the CFO is we looked at the reporting process of the CARES Act, the programs that received CARES Act funds, and we identified opportunities in that complete processes where we could convert from a manual to a robotics process. That’s where the programs are now starting to have visibility and getting excited about it. It’s improving our reporting for that particular program. What we’re hopeful is that once we get that rolled down, with the coordination and the collaboration with CIO, we’re putting in web portals for the grantees to report in with the with the compliance side of the CARES Act. The goal is to expand that to other grant programs that do not receive CARES Act funds, but we’re not necessarily in compliance before. I’m looking at this as a great opportunity to bring in further expand HUD’s capabilities on the sub recipient in sub grantee reporting, and also get the program’s energized by what robotics can do.” 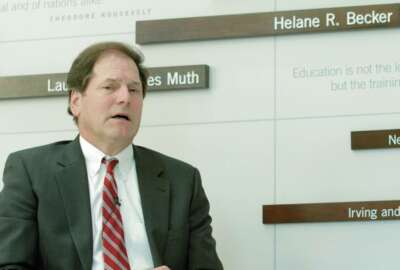 Given an early taste of ‘workforce reshaping,’ how HUD is retraining its employees for the future