Meet the new CEO of AmeriCorps

AmeriCorps is the government’s premier agency for engaging volunteers of all ages to help with the nation’s pressing problems. At the end of last year, it got an energetic new CEO when the Senate confirmed Michael Smith, who joined  Federal Drive with Tom Temin to talk about it.

AmeriCorps is the government’s premier agency for engaging volunteers of all ages to help with the nation’s pressing problems. At the end of last year, it got an energetic new CEO when the Senate confirmed Michael Smith, who joined  Federal Drive with Tom Temin to talk about it.

Tom Temin: And before we get into your background, which is pretty interesting. I wanted to talk about AmeriCorps itself. Give us a sense of the numbers of volunteers, the age distribution, what does it look like these days? The core of the AmeriCorps volunteers?

Michael Smith: Absolutely. AmeriCorps, the federal agency for volunteering and service, we were founded in 1993. So we’re about to turn 30 years old. But many of our programs like VISTA, Volunteers in Service to America,  go all the way back to the 1960s. Today, we have more than 250,000 AmeriCorps members and senior volunteers serving in 40,000 locations all across the country. So chances are if there’s a challenge, and there are people working to do something about it, AmeriCorps members are at the heart of that.

Tom Temin: And what are some of the major challenges? I imagine housing, environmental issues, and so on. I mean, these are both urban and suburban and rural, correct?

Tom Temin: Got it. And what does it take to be a volunteer? Do you get a lot of applications every year?

Michael Smith: Well, Martin Luther King said it best, anybody can be great because anybody can serve. You don’t have to have a special degree, you don’t have to go through a long course, you just have to have a desire to want to give back to your community. And we have AmeriCorps members that are 18 to 80. I actually met with an AmeriCorps senior member who was in their 90s a couple of weeks ago. So if you care about public education, you can work in the schools, if you don’t want to be around other people, and you just want to work in our parks, and help with trails, you can do that, too. You know, right here in Washington, we’ve got folks at Washington Parks and People, we’ve got folks that are working with the Washington AIDS partnership. So chances are if you have a passion, there’s an opportunity to use the power of service to do something about it.

Tom Temin: And what does it take to become a volunteer? There’s a process here.

Tom Temin: So volunteers do get some remuneration, not really a salary, but get some costs covered, say for commuting or travel to a national park, that kind of thing?

Tom Temin: And given the range of programs you mentioned, there’s 40,000 communities, you’re working with a quarter of a million people. What’s the process by which the core leadership decides this is something we can send volunteers to support? And how do you work with the external groups that you are supporting?

Michael Smith: You know, the wonderful thing about AmeriCorps, we are deeply local, we actually work through a network of state commissions. So most governors appoint a head of service for their state, and our state commissions help to decide what the local issues are. And we think about some of the things that are the most pressing issues in Washington. So for instance, we were really proud just a couple months back to launch Public Health AmeriCorps, a $400 million partnership with the Centers for Disease Control, where we are helping use AmeriCorps members to meet immediate public health needs, but also building the next generation of public health workers. So you know, you might have AmeriCorps members that are working on an issue that only matters in this specific issue in West Virginia. But we also might decide we’ve heard bubbling up, there’s this great need around climate or there’s this great need around public health. And so we’ll direct dollars that way on a national level.

Tom Temin: We’re speaking with Michael Smith, he is the CEO of AmeriCorps. And let’s talk about you for a minute. You have come from service in the Obama administration. But I think equally significantly, you were the head of a group called My Brother’s Keeper. I guess that was also backed by the Obamas. Tell us about that experience, and how it helps you in this job.

Michael Smith: You know, I think the most important thing to know about me is I am a kid from the communities that we are trying to serve. I grew up with teen parents and a single mother household in Western Massachusetts without a whole lot of money.  And the reason that I am here is because of a network of volunteers and community changemakers, who believed that their neighbor’s children were their children. And so I just was lucky to be able to create a career that was about giving back to the kind of communities that I came from. Yep, so most recently, I worked for President Obama for about eight years both in the White House and his foundation, leading his My Brother’s Keeper initiative, and his opportunity youth programs. But I actually also worked at this agency. I ran something called the Social Innovation Fund, which was about building up evidence-based approaches that are working in low income communities.

Tom Temin: Got it. And the My Brother’s Keeper initiative, I want to return to that in a minute, is concerned with black youth and their development. It sounds like a model that can be replicated across many different communities where people need help.

Michael Smith: Yes, President Obama launched My Brother’s Keeper after the tragic killing of Trayvon Martin. And the idea was, how do we make sure that there are pathways to opportunity for boys and young men of color, and that they know when they realize that they matter? So all across the country, there are hundreds of My Brother’s Keeper communities that are working on making sure that young people can achieve their dreams and removing those barriers and providing mentors and changing policy, so that those barriers are reduced for boys and young men of color all across the country.

Tom Temin: And let me ask you this, and of course, like all federal programs, they are blind to people’s color, their background, whatever they might bring to it. In this type of situation, mentoring, helping repair communities, helping with education. Can black people  mentor white children, or white adults mentor black children? I mean, can this cross boundaries that we commonly tend to draw amongst ourselves, such that integration in the best sense of the word can occur?

Michael Smith: You know, AmeriCorps is a beautiful melting pot of community members helping each other. So you have many AmeriCorps programs that are specific focused on one community, and you have people from that community that are helping people from that community. But you also have programs some of which you might have heard of: Teach for America and City Year in Public Allies, where people decide, “I want to move to another part of the country”.  And you have a rural farmer that’s working side-by-side with an inner city single mom. And I really think that’s where you see the power of national service, helping people to see their humanity and bringing people together. It is a beautiful, beautiful privilege to watch that all over the country.

Tom Temin: And what do you plan for AmeriCorps, you’ve been CEO now about six months. And who knows, maybe there could be another seven and a half years or six and a half years?

Michael Smith: Well, onmy watch  at AmeriCorps, I want to do a few things. One, I want to make sure that we’re leading with impact. So we’re not just 1000 flowers blooming. But we look back 20 years from now and say this is how we made an impact on our most pressing issues. Not only on the challenges that our communities are facing, but the AmeriCorps members themselves. I think about we just celebrated our 10 year anniversary with FEMA Corps, where they get to decide where AmeriCorps teams go to meet the disaster of the moment, FEMA Corps just offered our last graduating class 70% of them got job offers. So I want to make sure more of AmeriCorps is not only a one time service experience, but helping to change your pathway. I also want to make sure that AmeriCorps reflects the diversity of our country, The rich diversity and our AmeriCorps members and also our AmeriCorps grantees. And lastly, I want to make sure that AmeriCorps is doing more to bring people together. As I mentioned, we see it, but I think there’s even more that we can do to ramp it up so that people are working side by side together with people that they might not be seeing online because they’re living in these crazy echo chambers nowadays. And I think service, rolling up your sleeves with your neighbors, and with people from across the country, can do just that.

Tom Temin: Yeah, there is that reality aspect to it. If you’re helping someone learn to read, or if you’re fixing a trail, as you mentioned, or working to make sure people get lined up properly to get the vaccine into their arms. There is a physical reality to that, that transcends what you can do online pretty much.

Michael Smith: Absolutely. You know, all this gossip that we care about online, goes away when you are facing a disaster, when you are facing a challenge. When you just realize you have to get the work done. We still have people that are working in response to Hurricane Ida. We still have people that are making sure those that still haven’t got vaccines got vaccines. And when you are doing that work, you just want to make sure that you’re working with your neighbor to get the job done.

Tom Temin: Michael Smith is the CEO of AmeriCorps. Thanks so much for joining me. 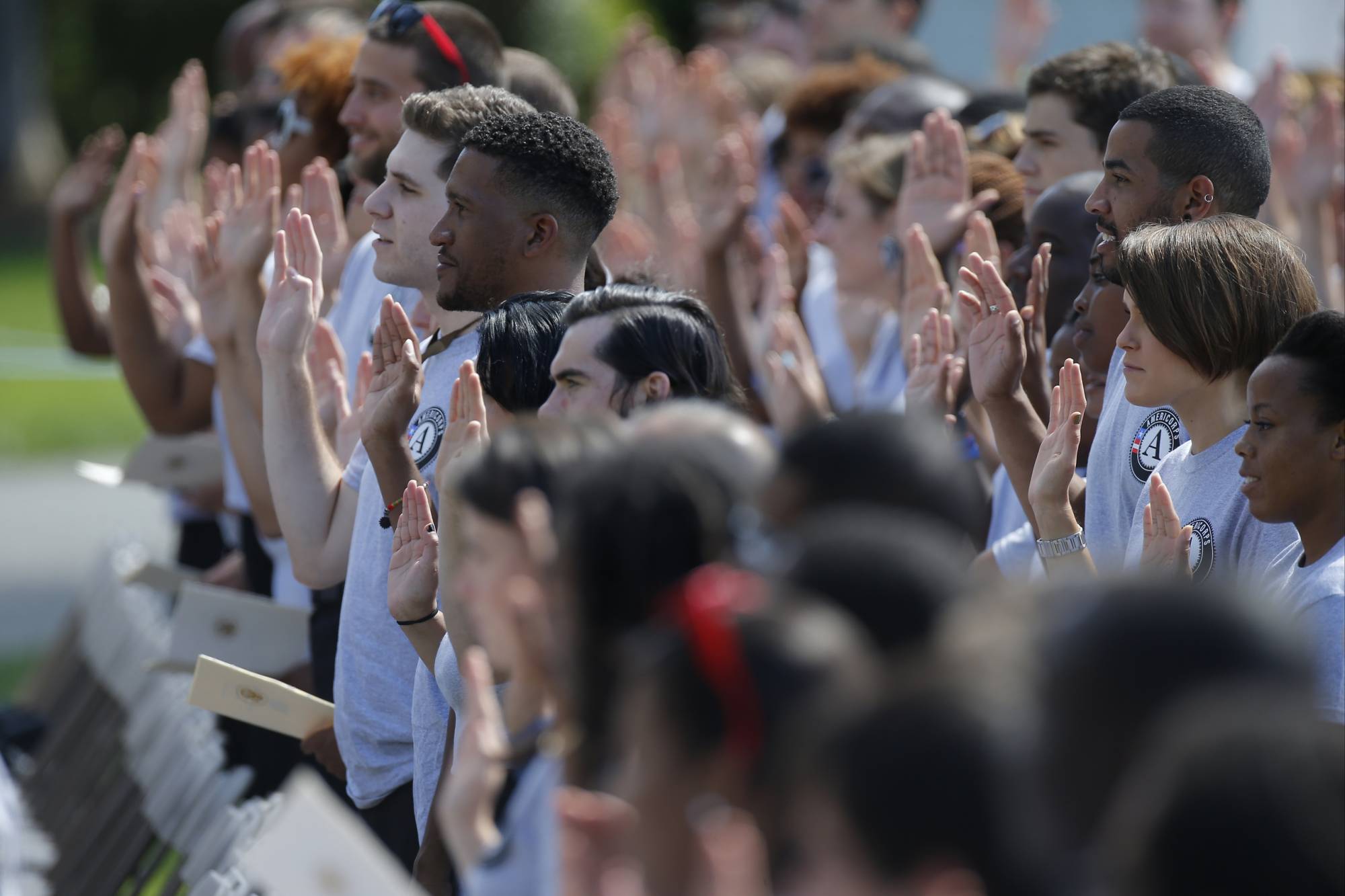 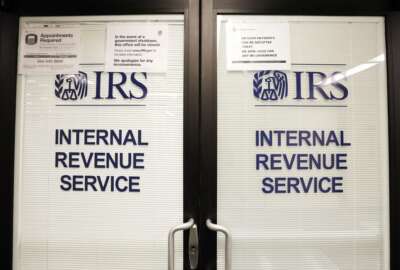