Active and retired feds probably won’t know the size of their 2020 pay raise — if any — or cost-of-living adjustment — if any — until late in the year. For the retiree COLA , any January increase will depend on the Labor Department’s inflation-tracking data for the third quarter of this year which will dictate the size of any COLA.  That final figure won’t be available until early November.  The official amount of the...

Active and retired feds probably won’t know the size of their 2020 pay raise — if any — or cost-of-living adjustment — if any — until late in the year. For the retiree COLA , any January increase will depend on the Labor Department’s inflation-tracking data for the third quarter of this year which will dictate the size of any COLA.  That final figure won’t be available until early November.  The official amount of the January pay raise — if any — could also be determined about that time. By then workers and retirees will also have data showing how much Federal Employees Health Benefits premiums will be going up in 2020. Tensions in the middle east could raise oil prices and that could have an impact on the COLA.

It is safe to say that most health premiums in the Federal Employee Health Benefits Program will be going up in 2020, as they did in 2019 and 2018, and the year before that. Medical inflation generally outpaces regular inflation — big time! Some plans, those that are favorites of federal retirees, will be going up more than others. A few may hold the line and one or two may actually reduce premiums.

Bottom line is nobody will know until just before the November open season. Then workers and retirees will have an extended period and a lot of help to shop for the best deal. Most feds, retirees and their survivors, have anywhere from 20 to 30 plans to choose from. The government will pay more than 70% of the total premium.

In a best-case scenario workers will get a raise, retirees will get a COLA and premiums won’t go up enough to eat up those increases.

So what’s the outlook?

On today’s Your Turn radio show, we’ll be talking with Federal News Network reporter Nicole Ogrysko, who’s been following the pay raise in Congress. On Monday the House Appropriations Committee approved a 3.1% pay raise. If approved by the full House and Senate that would lead to a 3.1% raise divided between an across-the-board increase of 2.6% with another 0.5% provided for locality adjustments.

The president has proposed no increase. He wants a system that would permit individual agencies to allocate raises based on merit and performance, as defined by that agency.

We’ll also be looking at upcoming changes in the Thrift Savings Plan designed to make it easier for participants to withdraw money. Expect to hear from Mike Meese, executive vice president and secretary of the American Armed Forces Mutual Aid Association. Founded in 1879, shortly following the battle of Little Bighorn, AAFMAA will celebrate 140 years serving military, veterans, and their families next week.

Listen at 10 a.m. EDT today here or on 1500 AM in the Washington, D.C. area. The show will also be archived on our home page so you can listen anytime or refer it to a friend or coworkers. If you have questions on pay, premiums or pensions for either of us, send them to mcausey@federalnewsnetwork.com before showtime.

Planning to go to any cookouts soon? Like many, you probably are. And that means you will probably come across condiments like ketchup. But ketchup wasn’t always just a condiment, believe it or not, it was once used as medicine. In 1834, Dr. John Cooke Bennet was first to add tomatoes to ketchup, back then the sauce had just been a concoction of fish or mushrooms. This added vitamins and antioxidants to the condiment. He then claimed his recipe could cure diarrhea, indigestion, jaundice and rheumatism. He began selling them as tomato pills. This led to a host of copycats, some of whom simply sold laxatives and made wildly false claims about what they could cure, bringing a quick end to the ketchup medicine market. 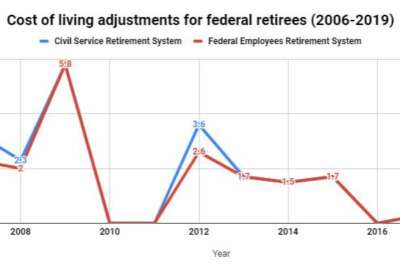