Good news, Congress is away. Bad news, they’ll be back!

Looking for a high-profile, low-turnover federal job with a pension to die for? Does the idea of lots of time off appeal to you?

If so, consider running for the U.S. Senate where one six-year tour of duty is often extended again and again. Or for maybe even more longevity, take the plunge and run for the U.S. House of Representatives. In many states, including some here in our own back yard, getting the nomination of the correct political party is tantamount to being elected. Thanks to gerrymandering — which includes Republicans and Democrats — the political party and its candidate decide who gets to vote for them, insuring long-term employment. And then there are those short work weeks — not for the staff — requiring members to be in town and on duty Tuesday, Wednesday and Thursday, week after week.

Depending on your definition of work, Congress is on what members consider a badly-needed break. Most office-holders left town last week and won’t be back until Sept. 9.

Roll Call reported earlier this year that Congress had agreed to 130 days in session over a 33-week period. Democrats approved some time limits that would allow the large group of newly-elected members to spend more time at home with their families.

Before leaving, Congress approved and President Trump signed a two-year budget deal that doesn’t make any changes in the two main civil service retirement programs, the Federal Employee Retirement System (FERS) and the Civil Service Retirement System (CSRS). Nor does it change the cost of living adjustments retirees get each January. At one time Congress and the White House wanted to require feds under the FERS program to contribute more of their salary to the program and eliminate future COLAs for FERS retirees. Losing the COLAs would be a major financial blow to retirees because inflation, medical and otherwise, could cut their income by half over time.

The two-year budget deal takes sequestration-triggered furloughs-without-pay off the table. In 2015, furloughs triggered by newly introduced sequestration rules hit 750,000 non-postal federal workers. Unlike shutdowns — like the 35-day nightmare last December through January — workers furloughed never get paid. Nor do most contractors that are caught up in a sequestration. That money is lost forever.

So the good news is that despite the tough talk from congressional Republicans and the White House, the employee benefits package hasn’t — again — been touched. Groups representing federal workers, postal employees and retirees will continue to lobby or sound the alarm if necessary. And that is good.

But feds are also fortunate that so many politicians who really dislike them and would like to whittle their pay and fringes down to size are even more preoccupied with doing whatever it takes to get reelected.

Including, more often than not, nothing!

All rooms in the Capitol Building are designated as either S (for Senate) or H (for House), depending on whether they are north (Senate) or south (House) of the Rotunda. Additionally, all addresses in Washington, D.C., are designated N.E., N.W., S.E., or S.W., in relation to the Rotunda as well.

More bang for your TSP bucks? 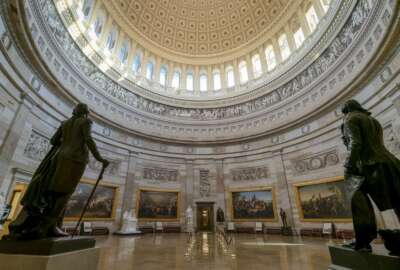