Just over a year from today Americans will be voting in what many people agree will be one of the most critical elections in our lifetimes.

Many will be first-time voters. They will include the 4,024,933 babies born in 2001, as well as now-voting age adults who were in kindergarten, grade school or junior high when the attacks were made on the World Trade Centers and the Pentagon. For those of us who lived through it and know people who were in harms way, or died, it is seared in memory. But for millions of Americans, the Sept. 11, 2001, attacks are just another blurred eve, lost in the relentless 24/7 news cycle where the equipment malfunctions of a pop star at a concert or rant of a sports star — or politician — continually divert us.

Sept. 11 was the first acknowledged foreign attack on American soil — a previous truck bombing at the World Trade Center in 1993 got lost in the clutter — since Dec. 7, 1941. If that date doesn’t ring a bell, ask your grandmother.

As we age out, for a growing number of Americans the routine of getting to the airport two hours early, stepping out of our shoes and being scanned, poked and prodded is normal procedure. Airport security lines are not the place to make any kind of jokes. Entering most government buildings, and even network news organizations, is like paying a social call on the gold reserves at Ft Knox.

A colleague, Megan C., said she was in a college art class in Missouri when they got the word. Her family was in Washington, D.C., so she called home thinking, first, it must be some kind of sick joke. For people younger than her, she said, 9/11 has been supplanted by mass shootings at schools and events.

A friend of mine, a Navy civilian, worked at the Pentagon on the side that was hit and partially destroyed. But that day, it was a Tuesday, and her husband was sick. She took him to the doctor and so missed work that day. Dozens of her coworkers died that day. She lives and works in Indianapolis now, but she won’t forget

One of my sons was catching a bus on the other side of the Pentagon. He was with a public relations firm and late for an event at the National Press Club. Another of my sons was at Washington Dulles International Airport when American Airlines Flight 77 departed from its gate, circled back and hit the Pentagon.

The mother of one of my daughters’ junior high classmates was on the same Dulles flight that crashed into the Pentagon and was killed, along with all of her fellow passengers.

A friend of mine with the Drug Enforcement Administration in Virginia looked up just in time to see the airplane crash into the Pentagon. Don’t tell him it was faked — trust me! From our WTOP/Federal News Network offices in D.C. we could, from the top floor, look down and see the Pentagon burning. It was real.

So much has changed. Today we routinely thank people for their service at certain events, but many of us don’t actually know anybody who is in the military, or take the trouble to get to know them.

When celebrating New Years Eve, several countries have special traditions regarding the choice of underwear. In Peru, people often wear yellow pairs inside out  — the color of the holiday — to encourage positive energy and turn them right side out immediately after the clock strikes midnight. In Turkey and Italy, many people wear red underwear for luck, and in the Philippines, polka dot undergarments are a popular choice.

At 9/11 memorial, new recognition for a longer-term toll 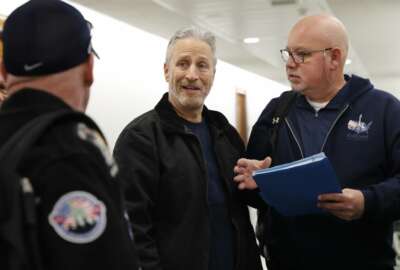