Federal workers and retirees are awash in numbers today, some solid, some still forming up.

The final total will determine in large part what kind of financial future they have — as in how much money they will have to spend in 2020, the eventual size of their federal retirement benefit and how much more, if anything, they will have to pay for health insurance coverage in 2020.

Here are the numbers at play:

Increases for retirees are based on the rise in living costs as measured by the Labor Department’s Bureau of Labor Statistics. The COLAs are a key component in the economy because they go to people who get Social Security, which includes about one in every six Americans. Big COLAs are nearly always welcome even though they are a reflection of (usually) higher prices for most goods and services.

Early in the year Trump called for a federal pay freeze in 2020, and in its place he proposed a system to give targeted, and presumably larger raises to individual civil servants based on performance and merit. But he later surprised lots of people by proposing the 2.6% raise after the Democratic-controlled House okay’d a higher 3.1% adjustment, and a group of pro-fed members began pushing for a very long shot 3.6%. This year federal workers got a 1.6% combined pay raise and locality adjustment.

Many feds and retirees are unhappy that the “average” FEHBP premium will rise 5.2%. This year the average was only 1.3% percent, but premium increases bounce all over the place. The Office of Personnel Management generally does an excellent job of negotiating premiums and benefit changes. But medical inflation almost always runs higher than the rest of the economy. Besides, the government will continue to pay the bulk of the total health premium — just over 70% — for most workers and retirees.

And FEHBP members will have an open season from mid-November to early December when they can shop around for a comparable health plan with lower premiums than they now pay. Some of the 20 to 30 available health plans are actually holding the line or reducing premiums. Health plan expert Walton Francis said many people can save $1,000 to $2,000 next year in premiums if they take time to shop around.

For some tips on savings, check out Tuesday’s column.

The first video game is thought to be Tennis for Two, a simple two-player game similar to Pong, which was created years later. Tennis for Two was developed in October 1958 by physicist William Higinbotham, who worked at Brookhaven National Laboratory in the instrumentation group. For the lab’s annual visitors’ days, Higinbotham was responsible for creating an exhibit to show off the division’s work, and though an interactive game would be more interesting. He designed it in a few hours, and technician Robert Dvorak spent about two weeks building the device. Players could turn a knob to adjust the angle of a bouncing ball, and push a button to hit the ball towards the other player. If they hit it at the wrong time or hit it at the wrong angle, the ball wouldn’t make it over the net. Tennis for Two proved to be an instant success. 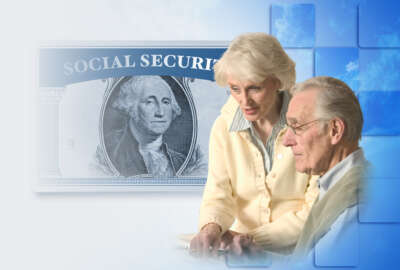 Retiree checks to rise modestly amid push to expand benefits

Are you a married fed with spouse and Social Security — lots of luck!