Zero pay raise, shutdown: What’s Santa got for you?

For the second year in a row more than a million federal workers aren’t sure whether they’ll be forced to come to work or be locked out of their offices, either way without pay, over the Christmas-Hanukkah-Kwanzaa holidays. Nor do they know whether their on-again-off-again 2020 pay raise will be 3.1% or 2.6%, or a long-shot 3.6%, or even zero.

The only sure thing in the federal numbers game is that for most, health insurance...

For the second year in a row more than a million federal workers aren’t sure whether they’ll be forced to come to work or be locked out of their offices, either way without pay, over the Christmas-Hanukkah-Kwanzaa holidays. Nor do they know whether their on-again-off-again 2020 pay raise will be 3.1% or 2.6%, or a long-shot 3.6%, or even zero.

The only sure thing in the federal numbers game is that for most, health insurance premiums will be going up in January.

The start date of the last shutdown — just before the holidays — and length of the lockout — 35 days — surprised most people. Some were shocked by the stupidity and pettiness of politicians in the White House and Congress who weren’t impacted by the mess they created mostly by not doing their jobs.

The government’s logic in defending the shutdown in court would be a head-scratcher for the authors of Alice in Wonderland and The Time Machine.

The National Treasury Employees Union went into federal court seeking damages (compensation) for employees involved. The government defense was that the suit had no merit because the shutdown was over. And the odds of another 35-day shutdown — not 34, not 36 — happening again are long.  Say what?

As Federal News Network reported last week, U.S. attorneys representing the federal government argued the court should dismiss the case, because the shutdown that prompted NTEU’s initial challenge is over — seriously. You can charge the alleged bad guy with murder because the person he killed is still dead! Or the odds of the same guys robbing the same bank and getting exactly the same amount again are slim and none!

The union’s case is moot, U.S. attorneys argued, because NTEU must show the court their case is “capable of repetition.” From the administration’s perspective, this means the union must demonstrate the likelihood that another lapse in appropriations — that’s nearly identical to the most recent 35-day partial government shutdown that occurred earlier this year — could reasonably happen again.

“In addition, the union must show a future shutdown could occur at exactly the same time of year as the previous lapse. Notably in this case, NTEU must demonstrate a future shutdown could reasonably occur during another tax filing season, therefore prompting the IRS to force thousands of employees to work without pay” Again. In other words, yes it happened but will the next one be an exact copy of the last one? If not, all bets are off.

Congress and the White House have until Dec. 20 to do something, even if it’s kicking the funding can down the road via yet another continuing resolution. Otherwise, Labor Department inspectors investigating charges of employer underpaying or not paying workers will, themselves, be on the clock, but in a payless status the government doesn’t tolerate. Unless it’s done by the government to government employees — then, apparently, its okay. Consider if there is another shutdown, and if you’re flying home or to Europe over the holidays wouldn’t it be less stressful knowing that the air traffic controllers handling your plane at 50,000 feet were getting paid? And weren’t being forced to work?

There’s still plenty of time but fasten your seat belts, just in case the clock runs out — like last year.

The world’s longest-running television soap opera, the U.K.’s “Coronation Street,” debuted 59 years ago on ITV. The show centers on Coronation Street in Weatherfield, a fictional town based on inner-city Salford near Manchester. Within six months of the show’s first broadcast, it had become the most-watched program on British television and to date has had 9,938 episodes. 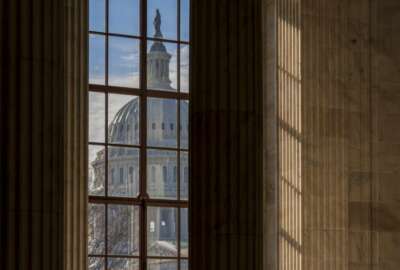 Ahead of Dec. 20 threat, judge considers whether NTEU shutdown case should continue