If President Donald Trump has a fan base within the huge, widespread federal family its core probably lies in the first responder community — firefighters and law enforcement officers, also known as LEOs.

Many of those front-line professionals have had prominent places in White House rallies around the country and especially along the Mexican border. Support and opposition to the Trump administration has split some federal unions. But backers of the administration could see things...

If President Donald Trump has a fan base within the huge, widespread federal family its core probably lies in the first responder community — firefighters and law enforcement officers, also known as LEOs.

Many of those front-line professionals have had prominent places in White House rallies around the country and especially along the Mexican border. Support and opposition to the Trump administration has split some federal unions. But backers of the administration could see things come apart in this election year if House Republicans seriously push a proposed civil service pension “reform” that could cost firefighters, LEOs and air traffic controllers tens of thousands of dollars in retirement.

The plan would eliminate a long-time benefit which provides “gap” payments to employees, like federal firefighters, forced to retire as early as age 57. Retirees get that gap payment, which can be worth $10,000 or more per year, until the retiree is eligible to receive Social Security at age 62. The National Active and Retired Federal Employees Association said in some cases they can be worth a much as $100,000.

In 2016 the National Border Patrol Council endorsed then-candidate Trump despite the fact that its parent union, the American Federation of Government Employees, was backing former Secretary of State Hillary Clinton. At the time the Council said the union needed bipartisan support to help protect the rights, jobs and pay of the 16,500 border patrol officers it represents. Plus, members liked the president’s comments about the threat of illegal immigration.

But making nice with the administration hasn’t been easy. In one of his first public speeches after taking over the Interior Department, then-Secretary Ryan Zinke publicly questioned the loyalty of a large number of its career officials. Other appointees at other agencies sometimes said their career staff had its own agenda or was less than enthusiastic about implementing new policy directives.

The President and some cabinet members have taken pot shots at the FBI and Justice Department, the intelligence community, and what they said are out-of-step policies of the Education Department and the Environmental Protection Agency, and the missions of agencies like the EPA. This week the White House was reassuring the public about the stability of the stock market even while the Centers for Disease Control and Prevention were urging Americans to brace for the “inevitable” spread of coronavirus in the U.S. When the city of Minneapolis warned police not to wear uniforms while appearing with the president at an event, the police responded by wearing specially-ordered red t-shirts which said “Cops For Trump!”

The proposal to cut gap payments for federal firefighters, LEOs and air traffic controllers has been made in each of the last three years and is part of an administration plan either to reduce benefits for current and future federal retirees, or to make them pay more for their pensions. One of them would raise the contribution rate to the Federal Employees Retirement System by 6% a year over a six-year period. Another would eliminate annual January cost of living adjustments for retirees under the FERS program and reduce them for Civil Service Retirement System retirees. Combined, they would reduce take home pay and future retirement income.

The president and some Cabinet officers have lashed out at “deep state” government employees on a number of occasions. In some cases it is part of the campaign to drain the Washington, D.C., swamp. In other cases, feds have leaked information or left a trail of stupid and inappropriate e-mails.

But in a year when a president who lost the popular vote is running for re-election, it might be prudent, not to mention maybe even fair to stop bashing Washington-based bureaucrats, especially since 86% of them live, work and vote outside the Beltway.

Since 1952, Michigan State University has offered a degree program in packaging, which covers materials — glass, plastic, paper and metals — and processes through systems development and testing. According to the school, packaging graduates have a 97% job placement rate and an average starting salary of about $63,237. 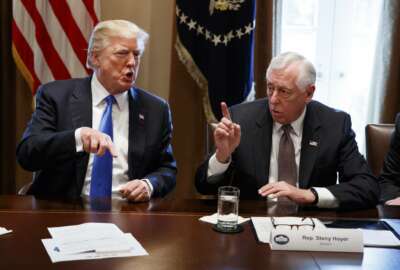