I don’t know about you, but I’m as much worried about the economic situation as I am about the coronavirus itself. People with federal jobs are relatively well off. I’ve got a neighbor who runs a very large non-profit occupying a landmark physical facility. He’s had to lay off nearly everyone — and take a 70 percent pay cut himself.

I don’t know about you, but I’m as much worried about the economic situation as I am about the coronavirus itself. People with federal jobs are relatively well off. I’ve got a neighbor who runs a very large non-profit occupying a landmark physical facility. He’s had to lay off nearly everyone — and take a 70 percent pay cut himself.

Recalling the stock market crashes of 1987 and 2008, you can take some solace in that fact that things do go up on the historic timeline. In ’87 my wife and I happened to be visiting the Santa Caterina Monastery at Mount Sinai. What an amazing vibe that place had. Having been out of touch with the news, we hadn’t heard. We learned about the stock market from a monk. I’d asked him if, in the monastic life, he kept up with the secular world. A former New Yorker he replied, “Well, I confess I do check the Yankees’ scores. And I know about your crash.”

So a little long term perspective helps, at least psychically.

For more practical advice on the current investment situation I spoke with Anthony Bucci, the founder of Mission Point Planning and Retirement of Troy, Michigan. His company specializes in the transition to retirement. He’s steeped in the complexities of the Thrift Savings Plan.

For volatile times like these, Bucci strongly advises avoiding what’s known as the Sequence of Returns risk. Here’s how Investopedia defines it: “Sequence risk is the danger that the timing of withdrawals from a retirement account will have a negative impact on the overall rate of return available to the investor.”

Basically, Bucci explained, when you sell share on the downward side, you are shrinking the base of shares available to benefit from the upturns. It’s like the reverse of buying shares on a dollar cost averaging basis. If you’re buying, keep it up, Bucci advised.

I myself will hit the traditional retirement age in two weeks, so I empathize. I’d already planned to keep working because I like it. But now it’s easy to understand why so many people are nervously chuckling, “Now I’ll never be able to retire!”

For many who are moving ahead with retirement or already retired, the essential question becomes all about that required minimum distribution (RMD) you’ve got to take every year. The stimulus bill the House votes on today might absolve people from having to take RMDs at all this year — presuming you can afford not to.

In September the revised TSP withdrawal rules went into effect. They give a lot more flexibility in when you can take the single (or portions thereof) lifetime partial withdrawal and when you can take pieces of your minimum required distribution each year. The bad news for withdrawals in downturns or periods of high volatility, Bucci said, is this: The rules “do not let you take and choose what investment within your TSP that the money comes from.”

To take a simple example, if half your money is in the aggressive C Fund, and half in the sedate G Fund, whatever you withdraw must come equally from each. Taking from the C “exposes you to the sequence of returns risk,” Bucci said. That is, you’re forced to sell off the weakening shares. If you had 100 shares at the peak, you’ll end up with 100 − n when the upturn returns. Enough of that, and, well…

He added, “Over time, that can have a major, major eroding factor on how long that money’s going to last.”

“Because the new TSP rules allow you to stop, start and change (withdrawals) on a monthly basis,” Bucci said, “if your personal balance sheet allows you to take a month or two off, it might not be a bad idea.”

Perhaps you can cut expenses and wait out the trough, hoping you can put off withdrawals until the C, S and I Funds recover somewhat. For some, that shouldn’t be hard. You can’t take a European vacation or a fancy cruise now, nor even go out for a splurge dinner anyhow. Costco has senior mornings Tuesdays and Thursdays. Get some socially-distanced fresh air and nab some Charmin.

Of course, when you do resume withdrawals, you’ll have to make up for lost time because of the severe tax penalties for withdrawing too little in a given year.

If you like tinkering, Bucci said, you could make a withdrawal from that C and G mix, then the next day put a chunk of the (after taxes) money back into the C. But when the market is doing extreme yo-yo ups and downs, that’s not a reliable strategy either.

Long run, when the market stabilizes, Bucci said “at that point you should probably reassess, and say, ‘What really should my mix be?’ relative to the money I need.”

He added that the one thing you don’t want to do at this time is chuck in the towel, sell everything low to try and preserve what you have. Better to alter the mix to keep the right portion of your account in aggressive funds, “right” being relative to your age and retirement status.

Your advisor can help you find the mix that will ensure enough growth to counteract inflation that the G Fund would be unable to keep up with. But that’s another story.

The first apple pie recipe was printed by Geoffrey Chaucer in 1381 in England. The ingredients in the recipe included apples, spices, raisins, figs, pears, and saffron which was all enveloped in a pastry crust. 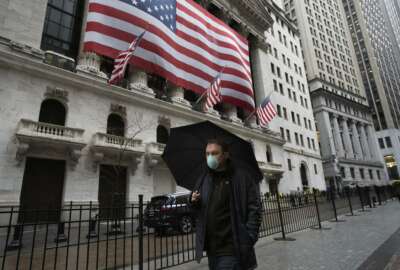 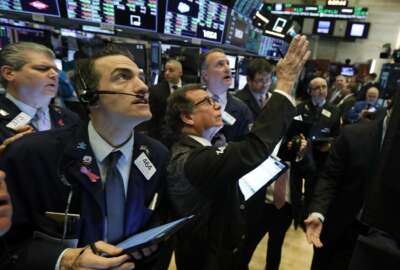