Over the years have you spent many, maybe in hindsight too many, hours ruing the fact that you chose — or more likely found yourself stuck in —a federal career?

Have you at times looked in the mirror and been horrified to see a bureaucrat staring back at you?  Where did you go wrong, right?

Was your original plan to be a NASCAR driver who somehow wound up crunching numbers at the Bureau of Labor Statistics? Or did you see yourself as an acclaimed TV anchor, or maybe a popular author while the world sees you as a medical technician with the National Institutes of Health? Or are you in some other anonymous U.S. government office which is not the first, second or even 10th thing you put on your dating profile? If so, time to do some un-ruing.

If so, stop feeling sorry for, or disappointed in yourself. Turns out you are in a very, very good place at a very, very bad time in American history. It’s not just a job anymore. In some cases it is the job!

Dr. Phil makes the big bucks as America’s favorite problem solver, and good for him. He does nice work. His wife also sells cosmetics — good for them. But in the real world of right-this-minute the real heroes, i.e. the people who will literally save our bacon, are mostly unknown, faceless bureaucrats plus a few exceptions who are enjoying (wrong word) a few minutes of well-deserved fame, like Dr. Anthony Fauci. He has been director of the National Institute of Allergies and Infectious Diseases under six presidents and is one of the public faces in the fight against the killer virus. Hopefully, if he and others do their jobs he won’t be in the spotlight for long. He and other G-men and G-women heroes will fade into the background — which will be a good thing.

But for now, the coronavirus is running wild. We have no idea how bad, how widespread or how long it will last and the 11-year bull market has been brought down by the bears. People are losing jobs or being locked out of the workplace. Folks from white collar professionals to food servers are being laid off and hoping they may be able to land some kind of work in a grocery store, or delivering things.

Whatever happens federal workers are not going to be laid off. Too many of them, the public is surprised to learn, are doing some pretty important stuff.  Like making tax refunds, sending out Social Security payments, tracking aircraft traffic both commercial and military at 50,000 feet, fighting fires, screening at airports — you would not believe what they find and prevent on a daily basis. They’re also doing law enforcement and public safety, and corona-control — monitoring, looking for a vaccine and ways to contain the virus.  It’s serious stuff, though not particularly sexy but genuinely life-or-death.

Hopefully this will all go away and become a footnote in history that most of us can recall a long, long time from now. Meantime, here’s a reality check from a retired letter carrier who explains why he’s glad he was a fed. It’s worth reading regardless of your job:

“Read your column earlier and you asked for thoughts and comments on the [Thrift Savings Plan]. I’m a 57-year-old retired letter carrier and have been in the TSP since day one. I always took the maximum match and by the time I retired was shoveling in 15% of my pay to go along with it. In all that time, I never — and will never — put any money in anything but the G fund. Sure it’s as about exciting as watching paint dry but so what? I remember when we went through the last major downturn (2008-2009) and one of my co-workers lamenting that she had just gotten her quarterly statement and she was beyond shocked at how much her balance had declined.

“The reason I raise that is because it brings up a very important point: You need to stay on top of these things. If she was watching her balance regularly instead of waiting for her quarterly statement and then reacting to it, maybe she would’ve put some of her money in a “safe harbor” at least for the short-term. I’ve never had a cause for concern and still don’t because even though I’ve been slow and steady, my TSP balance is in the very healthy mid-six-figure range. The house is paid for and I’m single so my annuity pays my bills — thank you [Federal Employees Retirement System] supplement! — and I have no plans to touch my TSP anytime soon.

“I’ve always lived by this motto: ‘Never invest money you can’t afford to lose.’ And TSP money is something you cannot afford to lose. In the interest of full disclosure, I will confess to investing money outside of the TSP and working with a financial adviser, but even there I’ve done OK because I’ve never looked for the big score and never will. My secret is very simple: I was fortunate enough to be born to Depression-era parents and my father was a 38-year fed himself who thought his [Civil Service Retirement System] annuity was the greatest thing since sliced bread and you wanna know something — he was right!

“Mike, keep on doing what you’re doing and I hope this finds you as well and safe as you can be these days, and please remain so because all of us who read your column want to have you to ‘kick around’ for many more years to come!

“PS: Be sure to thank your ‘associate writers’ for continuing the Nearly Useless Factoid which, again, is far from being so.”

In 1979, two years after his young wife Graciela died, Argentinian farmer Pedro Ureta began cultivating a guitar-shaped forest of cypress and blue eucalytus trees. It had been an idea of theirs to turn their fields on the Pampas into a work of art visible from above, but Ureta is afraid of flying and has never personally seen the guitar from the sky. 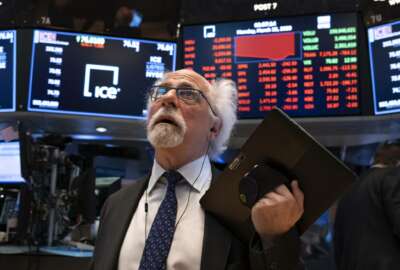