At the Office of Congressional Workplace Rights, a very tiny agency, four people in a meeting means each participant sitting on a chair pushed back into one of the four corners of the room. They pantomime high-fives and hand shakes.

It’s one coping element put in place by Director Susan Tsui Grundmann. The entire agency of 27 people is teleworking. But a portion of the crew comes into the office on a given day, a...

At the Office of Congressional Workplace Rights, a very tiny agency, four people in a meeting means each participant sitting on a chair pushed back into one of the four corners of the room. They pantomime high-fives and hand shakes.

It’s one coping element put in place by Director Susan Tsui Grundmann. The entire agency of 27 people is teleworking. But a portion of the crew comes into the office on a given day, a handful of people.

Grundmann said only a skeleton crew is in, but a different set of people daily. At least one is a supervisor. Plus the front desk is covered.

Seems like a reasonable approach. And because public transportation is like airline food — poisonous and not enough — OCWR covers ride services for people who can’t drive, bike or walk.

Many federal managers have asked about access to agency applications besides email.

“Our administrative dispute resolution system hasn’t stopped running,” Grundmann said. “That’s always been accessible to the public, to the staff that needs it.” Last year everyone at the agency got a notebook PC set up for remote access. “Once you do your double authentication, it’s like you’re at work,” Grundmann said.

Not everything is normal. lnspectors looking into complaints can’t go visit complainants. But they can write findings from earlier cases and enter data. Other employees were able to gather whatever physical materials they might have needed before heading for a stint of teleworking.

An old hand at federal management, Grundmann — formerly chairman of the Merit Systems Protection Board — appears to have taken a sensible approach to operating in the crisis.

Fair enough. But think about it — even the biggest department is composed of hundreds or thousands of agencies, bureaus, divisions, directorates, offices, work groups, units, teams and cells. Smart agency heads would push decisions down to those pieces, on the presumption that the local managers have the best handle on local conditions.

Before the virus, telework was falling out of favor in the Trump administration. Aside from continuity of operations, the value and utility of telework as the prevailing mode for the majority of employees is certainly open to debate. In the private sector, some large companies, notably IBM, pulled back from telework.

But when a situation like Sept. 11, 2001, snowmageddon or now coronavirus interrupts operations, why would telework not be the first thing invoked, especially in the age of broadband and cloud computing?

Well it is now, in the fourth memo from the Office of Management and Budget. Like a worm blindly trying to find its way across a wet driveway, OMB finally found ground. Amid the gobbledygook, you can find the hard nuggets of real direction. It’s in phrases like delegation of decision-making, mandatory telework, extending telework flexibilities to contract workers, and issuing general waivers policies — I think they meant for procurement on that one.

To its credit, OMB has dealt with two issues: Containing the virus and keeping critical services operating. It has, wisely in my opinion, resisted calls to simply declare telework the only way to go.

A final thought: It’s been nearly 20 years since the Sept. 11 attacks. A 30- or 35-year-old federal employee would have been sent home from elementary or middle school on that date. Their parents would have returned to work, and schools would have reopened, as soon as the next day and certainly within a few days.

Those millennials federal managers so earnestly want to hire and retain are watching and observing to see how the people in charge handle things. Are you ready for having staff scattered? Have you set clear procedures and expectations?

At the start of a talk for the AFCEA Bethesda monthly breakfast meeting, which turned virtual via Zoom, Dimitri Kusnezov of the National Nuclear Security Administration remarked, “I haven’t been teleworking ever, til now. This is certainly a novel experience.”

Indeed it is. It’s a novel time, and not in a good way. Clear heads will get us through it.

P.S. A few hours after I spoke with Susan Grundmann, she emailed to tell me that the OCWR’s landlord agency declared the building closed, so it’s all telework all the time. She added, “Since we have been testing working remotely for a while, we should be ready for the coming weeks.”

Can you say the same?

The tallest waffle stack ever recorded was made in Peoria, Illinois, last year, by Jeff and Jennifer Madden. It measured  34.01 inches tall. 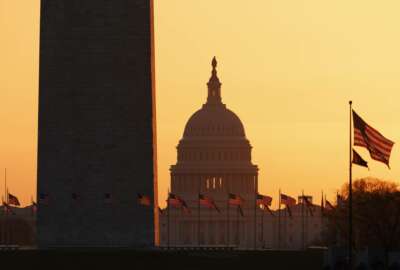