It’s rare the Hatch Act, the 1939 law that prohibits most in the executive branch from engaging in certain political activities as public servants, makes national headlines.

But it did this last week, when at least two cabinet-level officials gave speeches and participated in naturalization ceremonies during the Republican National Convention.

Their participation at the RNC scratched a few heads and prompted at least one lawsuit, which accused Secretary of State Mike Pompeo and acting Homeland...

It’s rare the Hatch Act, the 1939 law that prohibits most in the executive branch from engaging in certain political activities as public servants, makes national headlines.

But it did this last week, when at least two cabinet-level officials gave speeches and participated in naturalization ceremonies during the Republican National Convention.

Their participation at the RNC scratched a few heads and prompted at least one lawsuit, which accused Secretary of State Mike Pompeo and acting Homeland Security head Chad Wolf of violating the Hatch Act.

The debate led White House Chief of Staff Mark Meadows to comment on the Hatch Act, where he offered this assessment: “Nobody outside the beltway really cares.”

First, the statement seems to forget the 2 million-plus federal employees, 80% of whom live and work outside the Washington, D.C., metropolitan area, who are required by their jobs to think about the Hatch Act — or at least pretend to know what it is.

Many of you probably took ethics training at some point during your federal careers, and the Hatch Act came up then. Some agencies send occasional reminders to their employees about the law.

The Office of Special Counsel, the agency that oversees the act, receives a few dozen requests a year to issue formal, topical advisory opinions about it.

According to OSC data, the agency issued an average of 1,273 advisory opinions a year on the Hatch Act between 2014 and 2019. OSC, for example, recently reminded federal employees the same Hatch Act rules apply when they’re working from home. Campaign stickers and t-shirts aren’t allowed on your Zoom calls, just as they’re not in the office.

As for the complaints, OSC fields anywhere from 100-to-300 about potential violations a year. In 2019, OSC fielded a six-year record high of 281 new complaints.

OSC has the statutory authority to investigate potential violations of the Hatch Act. Punishments range from a warning letter to prosecution before the Merit Systems Protection Board. OSC can (and often does) attempt to settle with the employee or negotiate an informal resolution.

Second, violating the Hatch Act has real consequences — for you, anyway.

Here are some examples:

A Postal Service employee ran for partisan political office multiple times, despite several warnings from OSC about the Hatch Act. A Merit Systems Protection Board judge eventually removed the employee from the USPS.

An Energy Department employee accepted a three-year ban from federal employment after giving a tour of a radioactive waste treatment plant in Washington state to a congressional candidate. According to OSC, the candidate planned to use the information from the tour in a campaign. The Energy employee ended up involuntarily resigning.

An immigration judge at the Justice Department violated the Hatch Act when she promoted the platform of then-presidential candidate Hillary Clinton during a hearing over which she presided back in 2016. The judge received a 30-year ban from federal service and a $1,000 fine. She retired from DOJ and avoided further punishment.

Political appointees — from any administration — tend to forget it, but real people work for the federal government. Their jobs and livelihoods depend on it. And yes, violating the Hatch Act can get you fired.

But the consequences seem to differ for high-ranking political appointees. Again, here are some examples.

As Special Counsel Henry Kerner reiterated in a statement issued late last week: “Ultimately, officials and employees choose whether to comply with the law.”

OSC raised concerns with the White House last summer about Kellyanne Conway, (the now former) counselor to the president, who violated the Hatch Act during 10 television interviews. OSC said she should be fired, but the White House didn’t take action.

“Some presidentially appointed White House employees, such as Conway, fall under the president’s authority to discipline for Hatch Act violations,” OSC said in its 2021 budget justification to Congress.

Former Housing and Urban Development Secretary Julian Castro violated the Hatch Act too during the last year of the Obama administration, OSC found. The matter went to the White House, which didn’t act then either.

You and your agency have to care about the Hatch Act. But the White House — regardless of the administration — doesn’t have to; it’s built right into the law.

We asked you informally through our social media channels last week what you think of the Hatch Act.

Some of you see it as a convenient way to shut down unwanted or tiresome political conversations at work.

“It removes a spot of interpersonal friction and allows teams to work better together,” one person said on a Federal News Network Reddit thread about the topic. “People can be aware of your views, and that’s not bad, but the Hatch Act prevents people from shoving it down your throat, and vice versa.”

“It’s one of the major civil service reforms that lead to a professional organization instead of just political hacks that change every four-to-eight-years,” another respondent said. “But it needs more teeth, we’re seeing widespread blatant abuse these days that should be facing serious fines.”

Many of you clearly do care about the act, and you fully recognize the repercussions for you are different than the consequences for the higher-ups.

Another reader said: “It does not seem to apply at the cabinet level or higher. Penalties for violation carry no teeth, obviously.”

Those of you working for the Federal Election Commission, the intelligence community or one of the other “further restricted” agencies are most certainly aware of the Hatch Act. The act seems like a suppression of First Amendment rights, one reader told us in an email.

“Sure doesn’t seem to stop anyone in the current administration from violating it repeatedly, though,” the reader said.

Another reader took pride in his handling of the law but expressed dismay that others seemed to thumb their noses at it.

“I was a federal employee for 33-plus years (DoD/intel) and never once felt the Hatch Act was inappropriate or restrictive,” one reader told us in an email. “When I had to make decisions on contracts, when I signed procurement documents for supplies my office needed, when I had to make decisions on what stocks I wanted to invest in, whatever the situation, I did not want to give anyone, including coworkers and friends outside the government, that I was using the government to my advantage. I considered myself a public servant, and annually signing the form stating my financial interests was a pleasure. If I have one observation, it is that the current administration has thumbed its nose to ethics in general, including the Hatch Act. I followed the rules for 33-plus years; they can’t even do it for less than four years.”

So perhaps Meadows, who, as a congressman, was more in tune with the intricacies of the federal workforce than most, has underestimated the impact the law has on employees.

And if the Hatch Act as it’s written isn’t cutting it — as some of you suggest — then maybe it’s time for another update.

The tufts of fur that grow from the inside of cats’ ears are known as “ear furnishings.” 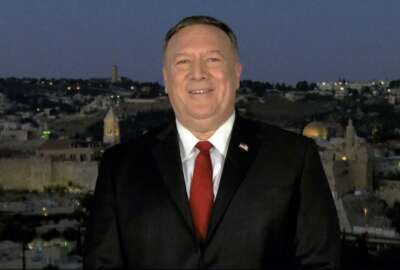