Will Biden give federal employees a shot in the arm?

Never has such a cliche as “shot in the arm” taken on so much literal import. Yet can anyone say for certain what the heck the national policy is for who gets “The Shot” first and when?

But as far as I can tell, federal employees as a group don’t constitute a priority, unless their individual occupations — principally health care — coincide with one of the priorities on the national plan.

Never has such a cliche as “shot in the arm” taken on so much literal import. Yet can anyone say for certain what the heck the national policy is for who gets “The Shot” first and when?

But as far as I can tell, federal employees as a group don’t constitute a priority, unless their individual occupations — principally health care — coincide with one of the priorities on the national plan.

There is a national plan, developed by the Centers for Disease Control and Prevention, and running 75 pages. It’s called a playbook, using the contemporary vernacular. According to this tracker, in the first month of vaccinations in the U.S., about 11 million have been given. Russia, not even a million. Israel had injected more than 2 million, out of a population of 9 million. The U.S. is middling.

Now stadiums and places like Disneyland are trying to be supercenters for vaccinations, but some of those venues have proven chaotic.

Each state has its own plan, and state plans seem to be in constant revision. Rooting around plans in Maryland, for instance, and its Montgomery County plan, lead me to think I may be eligible, I don’t know, this summer? This fall? New York State has experienced crashing web sites or mass time-outs as millions, told they’re eligible, try to get appointments. A New York City mayoral candidate called the Big Apple’s sign-up process bewildering. I guess like navigating Zabar’s for the first time.

Whatever guiding design might be behind how the vaccines are getting out, the execution looks like nothing so much as the cat’s breakfast.

Reports from several hospitals say doses have gone down the drain because of a lack of arms to stick them in. One reason, perhaps hard to grasp, is that some medical practitioners don’t trust the vaccine. Which is to say, they don’t trust the chain of development, approval, manufacture, and distribution.

I remember as a young child getting a vaccine for polio. Administered in school, it consisted of a cube of bread, or maybe it was a cube of sugar — I’m not certain — saturated with the vaccine.  The polio vaccine, which eventually ended a terrible scourge, was a long time in development and had a jerky establishment. One company prepared its vaccines incorrectly and ended up actually causing polio in tens of thousands of children. That was in 1955, nearly 50 years after the virus had been identified.

But presuming the current vaccines for coronavirus are okay to take, it sure does seem like it’s taking a long time.

Former Veterans Affairs Secretary Dr. David Shulkin urges the next secretary to bring VA into the vaccine distribution and injection effort more fully.  President-elect Joe Biden has nominated Denis McDonough, a former Obama White House chief of staff, as the next VA secretary. Shulkin said dealing with the pandemic should be the first thing on the new secretary’s plate.

“The VA, let’s remember, is the largest healthcare center in the United States,” Shulkin said. “It has more doctors, more nurses, more pharmacists, more health care professionals working in its system than anyone else.”

He added, “One of the real missions of the VA is to be a backup national emergency system. Frankly, I’ve been very disappointed that the VA has not yet really shown the country what its capabilities are.”

For its part, VA says it’s vaccinating veterans in its long-term care facilities and its own healthcare people first. Those two groups add up to hundreds of thousands. High risk veterans come next.

Whatever NIH has in mind for its employees is not available to the public. The Office of Personnel Management has nothing about which federal employees are eligible or when they’ll get vaccines. Ditto for the Defense Health Agency.

National Treasury Employees Union President Tony Reardon told Federal News Network’s Nicole Ogrysko that he’d asked the IRS to get employees who return to the office vaccinated. But the agency has made no commitment.

Late last year Virginia Rep. Don Beyer (D) asked OPM, National Security Adviser Robert O’Brien and Health and Human Services Secretary Alex Azar what their plans were for federal employees. A spokesman for Beyer said he still hasn’t gotten a response, but will pose the same question to the Biden administration on day one. 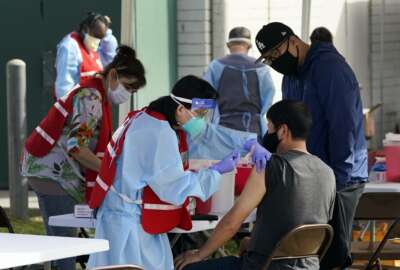 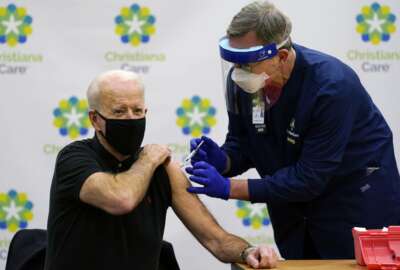 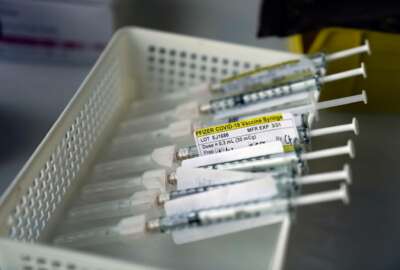