Let’s start at the top with the “s” word. This is priority no. 1 considering the date on the calendar. Congress must pass some sort temporary stop-gap bill by Sept. 30 to avoid a government shutdown.

But members are nowhere close to finishing a catch-all spending omnibus that would fund federal agencies in fiscal 2022, and we can probably just forget individual appropriations bills at this point.

A continuing resolution is virtually inevitable, which the White House acknowledged last week when it released a supplemental spending wish-list. It didn’t comment on how long a potential CR should be — or provide any reassuring comments that Congress would make it happen before the fiscal year deadline.

Timing is tight but doable.

Republicans are digging in on their refusal to raise the debt ceiling. House Speaker Nancy Pelosi (D-Calif.) has said there are multiple paths to raise it, but it’s unclear which option they’ll take. Options may include tying a vote on the debt ceiling to other big to-do list items.

Tying together a vote to avoid a government shutdown and raise the debt ceiling could get dicey.

The House also still needs to advance the Senate-passed bipartisan infrastructure bill and send it to the president’s desk. Promises have been made to at least begin debate on that bill by Sept. 27. You can check out our roundup of provisions important to federal employees and their agencies here.

Then there’s the defense authorization bill, which is usually considered must-pass legislation. Congress has advanced the National Defense Authorization Act for the last six decades or so.

Both the House and Senate Armed Services Committees have each passed their own versions of 2022 NDAA. With everything it has to do, it doesn’t seem likely Congress will have much time to coalesce around a conferenced version of the 2022 defense bill until later in the year.

And then of course, if Congress manages to pass a short-term continuing resolution by the September deadline, it still has an entire budget to contend with.

Congress is approaching the budget process a bit backward this year.

In “normal” times, the president submits his proposed budget to Congress in February, and lawmakers prepare a budget resolution around May.

Budget resolutions set spending levels under broad legislative categories and aren’t presented to the president. They can also include “reconciliation instructions,” which set the procedures for enacting parts of the resolution into law.

Typically once Congress has broad spending levels set and resolution passed, committees in both the House and Senate begin their work annual appropriations bills, the measures necessary to avoid a government shutdown.

It’s become exceedingly rare that Congress finishes all this work by Sept. 30, the technical end of the fiscal year. Omnibuses — catch-all bills that combine all the appropriations measures into one — are in vogue, and Congress finds a way to pass them into law by the end of the calendar year.

This year, Congress has reshuffled those steps a bit, and it didn’t help that things got a late start. President Biden didn’t unveil his full 2022 budget until late May.

By late July, the House had passed nine out of 12 appropriations bills.

But the budget resolution didn’t truly come into play until mid-August, when the Senate passed one before leaving Capitol Hill for recess. The House adopted it later last month.

Democrats envision using that resolution as the vehicle to advance a $3.5 trillion reconciliation package of White House priorities with a simple Senate majority.

Then, House leaders must package up all those proposals into one reconciliation bill, pass it and send it to the Senate, where it needs just 51 votes to advance.

There will be plenty of hurdles along the way, and there’s no guarantee Congress will pass it.

Oh, and this is a separate process from physically appropriating funds to federal agencies, which must happen at some point this fall. If Congress passes a continuing resolution later this month, it’ll buy some time. But we don’t know yet how much.

Buckle up, it’s going to be a busy month(s)! 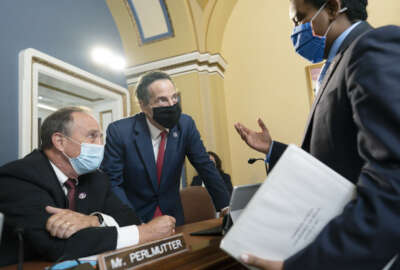 For federal employees, 3 items to watch in the bipartisan infrastructure bill