COLA, COVID, pay raise, shutdown: Time for a time out?

In 2018 B.C (before COVID) my morning commute was about 31 to 32  minutes.  Door-to nice-parking space. Then just steps to the building. Not a lot but also not-much-fun.

Then the pandemic hit. People started working from home (or losing their jobs) and traffic in this city of traffic circles, tourists and sometimes devil-may-care diplomats almost disappeared.

Now it takes me about 13 minutes in the a.m. Driveway to parking spot. Until two weeks ago…

In 2018 B.C (before COVID) my morning commute was about 31 to 32  minutes.  Door-to nice-parking space. Then just steps to the building. Not a lot but also not-much-fun.

Then the pandemic hit. People started working from home (or losing their jobs) and traffic in this city of traffic circles, tourists and sometimes devil-may-care diplomats almost disappeared.

Now it takes me about 13 minutes in the a.m. Driveway to parking spot. Until two weeks ago…

Back to work and back to school. What a difference a day makes.

Suddenly I am back to 32 minutes — if I’m lucky! — on the road. I know that’s a joke for many who spend three or four times that amount just getting to work.

It started just as Congress narrowly avoided a government shutdown that would have directly hit 800,000 feds, at least, and many, many more federal contractors. The feds, if the past is prologue, would have eventually gotten paid. The contractors probably not. At least that’s the way the last one, a 35-day fiasco that included Christmas, went. During that one some feds actually had to visit regular and makeshift soup kitchens, and exhausted the funds of FEEA, a feds-helping-feds-charity. The really dumb thing is that the shutdown issue will return in December. Once again feds and contractors — but not the House and Senate members who may trigger the shutdown — will go without pay. Maybe for a long time. The politicians will continue to work, and get paid, because they are the only ones who can fix the problem they created.

One bright spot is that feds are looking at an almost-sure-thing pay raise. Not as much as unions say they need and deserve. But something.

The good news for federal retirees is that they will be getting a cost of living adjustment (COLA) in January. The exact amount is being calculated now at the Bureau of Labor Statistics. And it will be announced soon and will also go to Social Security recipients and military retirees. Also it will be one of the largest in years, something in the neighborhood of 6%. For most…

The bad news is that a COLA that high means that inflation is up. As are prices for most things. Many economists  say this is the beginning of a period of rising prices for everything.  And that even this projected high figure won’t cover all costs for things — like medical treatments — that are rising faster than the regular rate of inflation.

For FERS retirees, higher COLAs can be bittersweet. Because of the diet COLA formula, FERS retirees get less when inflation exceeds 3%. So if the January 2022 COLA is 6% for CSRS and Social Security retirees it will be 5% for FERS retirees. Over time, and not too much time at that, that negative compounding could dramatically reduce the amount of money they have in retirement versus rising costs of things they must buy.

Meantime many people who’ve grown accustomed to working from home (or who hate it) are returning to work. Or if the mission to vaccinate the unvaccinated fails and herd immunity isn’t achieved this could be a rough fall and winter.

Lots of people can’t wait to get back to the office work environment and their colleagues. The wisdom-of-the-crowd effect. But for others, individuals, corporations and government agencies, telework is here to stay. Many say they are more productive, and actually work longer because they are free from the commute.

Ida, a fed in Boston, wrote to thank Washington (in this case our Nationals Baseball Team) for losing Sunday’s game, thus keeping the Red Sox alive in the pennant race. But she also said she loved working from home, has been much more productive “and I expect to get even more done now that my kids have returned to school.” She said teleworking is a win-win and that she might consider retiring early and taking another job if ordered back to work.

Jim in Philadelphia says as far as telework is concerned, “the proverbial genie is out of the bottle” and can’t be put back in.

Several other feds have pushed it further. Their plan is to keep working for the same agency, but from a town hundreds of miles away where people are nicer, the weather is more mild, and where their money will go farther than in the big city. Several asked or predicted that the issue of locality pay is going to become very important, very soon. Should/can feds whose jobs are based in Houston, New York City or the D.C.-Baltimore area move and work into RUS (the nationwide locality pay zone known as Rest of U.S.) work on Maryland’s Eastern Shore but get paid DC locality rates? Or transfer from Manhattan to central Pennsylvania and keep their current rate? Should you pay depending on where you live or the locale of your agency? Many private firms are encouraging people to work from where they are comfortable and continue to get paid big city rates.

So what do you think is gonna happen? What should happen? We’re doing it at my office which now has people working from Portland — both in Maine and in Oregon — New Jersey and New Orleans. And it is working beautifully.

Let me know what you’re doing (mcausey@federalnewsnetwork.com). You can remain confidential (generally a good rule if you are a fed) or use a pen name. The main thing is what’s going on out there. And especially where you live and work!

In the southern African Kingdom of Eswatini, formerly known as Swaziland, it is illegal for witches to fly on broomsticks higher than 150 meters off the ground. The infraction carries a fine of R500,000, or just under $33,300. There is no fine for flying lower than 150 meters. 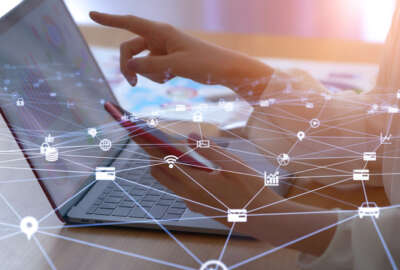 Teleworking here to stay: What’s in it for you?

We had telework under control; Now heading back to the office is the real threat