Over the past five years, the Navy and Marine Corps have been busily issuing contracts for a mix of alternative energy technologies like wind and solar so that more than half of the electricity demands on its bases no longer depend on public power grids. But Navy secretary Ray Mabus says there’s another alternative his department’s hasn’t explored yet: nuclear, and its time may have come.

While nearly a fifth of the Navy’s ships run on nuclear power, the only land-based nuclear reactors the service operates are for training purposes. But Mabus said this week he wants to explore the concept of installing small, modular nuclear reactors on bases to continue their push toward independence from off-base energy.

Rather than the large, utility-scale nuclear plants currently in use by civilian power companies, Mabus said he envisions a system of small, “distributed” nuclear generators networked together via a microgrid on a given base.

“With some of the new technology that’s coming along, it’s much safer, it produces far less residue and nuclear waste, and it is an option that I think we should explore,” he said at the Council on Foreign Relations in New York this week. “In every source of energy, whether it’s solar or conventional energy, it’s becoming much more distributed where you generate and store energy exactly where you use it. We’re looking at nuclear in the same way, but we haven’t gotten there yet.”

Mabus said that’s partially because other alternative energy sources, including geothermal, hydrothermal, wind and solar have, so far, been cheaper and easier to implement. Those technologies have largely been responsible for the Navy department’s success in getting more than 50 percent of its shore-side power from alternative sources, a goal Mabus set in 2009 and that the Navy and Marines met by the end of 2015.

He said in the short-term, the two services would continue to focus mainly on those renewable technologies for the energy needs of its 117,000 buildings around the world.

But several commercial firms have already begun work on miniature nuclear reactors of the sort Mabus envisions using, touting them as safer than traditional nuclear plants because of automated safety features and containment systems that are entirely underground, and cheaper because they can be fabricated in factories and quickly assembled at the sites where they’ll be used.

Last month, another federal agency, the Tennessee Valley Authority, asked the Nuclear Regulatory Commission for permission to begin testing small modular reactors at its Clinch River research site in Oak Ridge, Tenn., saying research activities into the small reactors “support the agency’s technology innovation mission and are consistent with TVA’s vision to be one of the nation’s leaders in cleaner, low-cost energy.” The Department of Energy is contributing half of the funds for the project.

Mabus noted that while much of the basic research that winds up in commercial reactors is actually first conducted by the Navy, the nuclear power plants it’s accustomed to building and using for ship propulsion purposes aren’t a great match for what’s needed for shore-based electric generation.

“There are differences because ours are 35-year reactors that don’t need to be refueled, and civilian reactors are refueled about every two years,” he said. “Also, a submarine doesn’t take as much power as a community does. But a lot of the basic technology is transferable.” 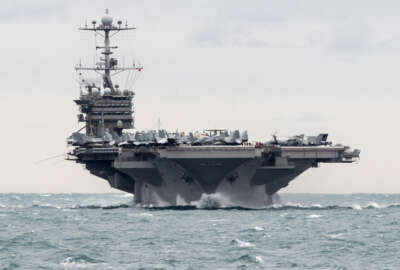