The former vice chief of naval operations violated Pentagon policies against using personal email for official business. But his communications with a former subordinate who had been investigated for misconduct did not cross any official red lines, according to an investigation by the Defense Department’s inspector general.

In a report released Wednesday, the IG concluded Adm. Bill...

The former vice chief of naval operations violated Pentagon policies against using personal email for official business. But his communications with a former subordinate who had been investigated for misconduct did not cross any official red lines, according to an investigation by the Defense Department’s inspector general.

In a report released Wednesday, the IG concluded Adm. Bill Moran had shown poor judgment by continuing to get professional advice from the public affairs officer, who had been removed from the chief of naval operations’ staff over allegations of sexual harassment. Navy Secretary Richard Spencer also faulted Moran’s judgment when he accepted Moran’s request to retire last month.

Moran’s decision to leave the Navy came as a major surprise to both senior Navy officials and to Congress. The Senate had just confirmed him to succeed Adm. John Richardson as the chief of naval operations in May. But Moran disclosed the ongoing email relationship to Richardson a month later, and he declined the appointment to become CNO shortly thereafter.

Moran told investigators he maintained contact with the PAO, Cmdr. Chris Servello, because he believes in redemption, and the officer had already been held accountable by being reassigned and forced to retire.

“[He] was a colleague and a friend who disappointed me terribly on a personal level, but on a professional level he has an awful lot to offer to make senior leaders like me think clearly,” he said. “And there are those who would say well, you obviously didn’t care about the victim. And I would say no, I didn’t have a relationship with the victim. I had a relationship with this guy and I expressed my personal disappointment to him, but I also cared for him.”

And Richardson said there was no problem with Moran maintaining a relationship with Servello as a friend and a mentor.

The problem, he said, was that Servello was continuing to give Moran official public affairs assistance, including by helping to draft speeches and Congressional testimony, even while Richardson was assuring lawmakers that the CNO’s office had severed all ties with him in the aftermath of the sexual harassment investigation. 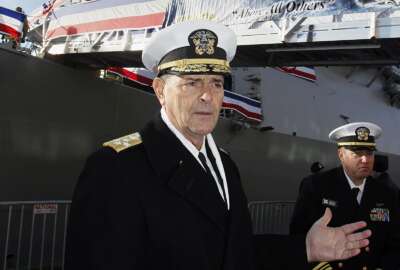 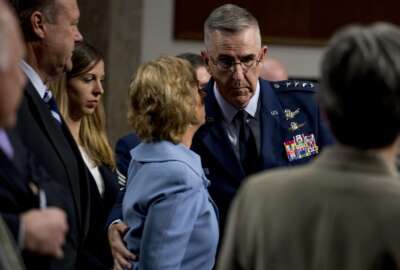 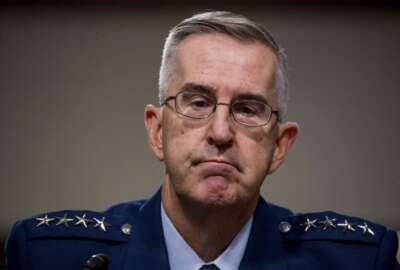 “I made it very clear that we, Navy leadership was not in contact with [the Navy commander]. He was not advising us. He was not in the inner groups. He was not providing strategic or public affairs advice and so to find out that in fact that was going on in this sort of off-the-record manner was concerning,” he said. “This was legitimate high-level Navy strategic business being done, and that was a much different relationship than I was aware of.”

The IG also said the Navy should take “appropriate action” against Moran for violating rules against using personal email for government business.

Moran told investigators he had developed what he termed the “bad habit” of using his Gmail account for some communications while he was the chief of naval personnel, a job that required frequent travel. Network connectivity on his government-provided device was too unreliable, he said.

“He stated that personal e-mail was the ‘easiest, most effective, most reliable way to get access to media’ especially if there was late breaking news that would affect the speech or lecture he was about to deliver,” the IG wrote. “Adm. Moran also identified access to Wi-Fi on commercial and military aircraft as a contributing factor. He stated that Gmail allowed the user to open any links embedded in e-mails, while the government blocked access to embedded links in the government accounts.”

He also suggested it was common practice for senior Navy officers to use personal accounts for at least some official communications. Somewhat counterintuitively, they viewed those commercial accounts as better-suited to confidentiality than their official government ones, because members of their immediate staff often have access to their official accounts.

“He said that as a result of allowing multiple members of his personal staff access to his e-mail discussions with other senior Navy leadership, Adm. Moran used his personal e-mail to discuss sensitive ‘flag matters’ like assignments and promotions with other senior Navy flag officers because ‘we could control who was seeing what,’” according to the report.  Adm. Moran told us ‘Flag detailing is a really sensitive topic. There is always a risk of our discussions about who might go to this job and that job being leaked.’”

The revelations about Moran’s email habits also prompted Navy Under Secretary Thomas Modly to issue a July 12 memo reminding Navy and Marine Corps personnel that DoD and Navy Department rules forbid the use of personal email for official functions except in specific, rare circumstances.

“Everyone knows this, but you know, sometimes people get lazy or forgetful or they’re in exigent circumstances where they say, ‘Well, I really need to make this communication and I don’t have access to my government email,'” Modly told reporters earlier this month.  “So I just wanted to make it clear to people, so that they understood what the rules are regarding this.”

The IG also noted that if Moran needed public affairs advice, he could have turned to the office of the Navy Chief of Information (CHINFO), the service’s Pentagon-based public affairs office.

But he said he sought out Servello’s advice because he had had a 10-year professional relationship with him, and considered him “the best I had ever come across.”

He had a lower opinion of the personnel at CHINFO, saying the office was “a mess. No leadership.”

“Adm. Moran said that the Navy had not filled the CHINFO flag officer leadership position for ‘nearly a year and a half’ after the previous admiral in charge of CHINFO had retired,” investigators wrote. “Adm. Moran said he did not believe he was going to get ‘good support’ and that CHINFO’s job was not to write speeches. Adm. Moran also said his speech writer was an inexperienced lieutenant with about ‘a year to give.’ His speech writer was great at research, ‘but putting a speech together is so much more than that.’”

In a statement to the IG’s office in response to a draft version of Wednesday’s report, Moran said he agreed with investigators’ conclusions that he used his personal email account for official business and didn’t appropriately archive those messages.

“I understand and accept that some view my continuing professional relationship with this Navy commander as insensitive, inappropriate, or wrong. I regret this. I made the decision to retire rather than put the institution through additional turmoil at a critical time,” Moran wrote. “It is important for the record to note, that for over a decade, I dedicated myself to eradicating and combating sexual harassment, sexual assault, toxic environments, unconscious bias and all of the other behaviors that are contrary to mutual respect and good order. I am proud of those actions. The ledger of my work on behalf of all sailors is available for all to review and consider.”

He said stepping aside from the CNO position was the right decision, considering the controversy his relationship with Servello would have created for the Navy.

“This report reminds leaders at all levels, but especially senior leaders, that striking the balance between accountability and redemption is at the heart of leading women and men in the profession of arms,” Moran continued. “Getting that balance right is not always easy.”

After Moran declined the CNO position, the president nominated Michael Gilday for the job. Gilday, who had been the commander of the Navy’s cyber command, was formally sworn in last week.