Navy plans to collect data from the sun

The Navy is sending a camera aboard a satellite to grab data from the poles of the sun. Yes, it’s hot up there, but the resulting information could have important implications for naval operations. Robin Colaninno, an astrophysicist at the Naval Research Laboratory, joined the Federal Drive with Tom Temin. to explain what this project is all about.

The Navy is sending a camera aboard a satellite to grab data from the poles of the sun. Yes, it’s hot up there, but the resulting information could have important implications for naval operations. Robin Colaninno, an astrophysicist at the Naval Research Laboratory, joined the Federal Drive with Tom Temin. to explain what this project is all about.

Tom Temin: Dr. Colaninno, good to have you on.

Robin Colaninno: Hi, nice to talk to you..

Tom Temin: Tell us what you’re trying to do here, first of all. What’s the ultimate goal of getting solar views of emanations from the sun?

Robin Colaninno: So the ultimate goal here is to better understand the sun and it’s dynamic processes, and the effect that it has on Earth. So the sun has events that can affect Earth. And we’re doing the basic research that we need to do to predict the space weather. So similar to terrestrial weather, the sun also creates weather in space. And we’re doing that basic research to try to better predict and forecast the weather in space so that we can protect Earth’s assets.

Tom Temin: Because the Navy, I guess, depends on weather as much as anybody could possibly on Earth. So ultimately there’s a way to better predict weather and better plan around what might happen.

Robin Colaninno: So this is really the weather in space. So this is weather that would affect satellites. This also effects things like power grids, communications, GPS and all of this, of course, is very important to the Navy. It’s also very important to a variety of commercial and other government agencies as well.

Tom Temin: Got it, okay. So weather in space affects things, not the weather on Earth but a lot of other phenomena on Earth.

Robin Colaninno: That’s correct. It mostly affects our technologies. And as we become more and more dependent on these technologies for our everyday life, space weather can affect us more and more.

Robin Colaninno: So the camera is called SoloHI, and it’s a highly specialized camera designed to image in space the faint solar atmosphere called the solar corona and the solar wind, which is the plasma environment in interplanetary space. And SoloHi is on board the Solar Orbiter spacecraft. It is a mission that is a collaboration between NASA and the European Space Agency (ESA), and it is a collaboration with contributions from over 20 countries and SoloHI is the only completely US instrument that is on the spacecraft.

Tom Temin: And the Navy had this built specifically for this purpose?

Robin Colaninno: Well, the camera part of it is fairly simple. It’s actually similar size to maybe a digital SSR, but it’s in an instrument which is about the size of a very large shoebox, maybe like ski boots. And that box is actually a set of baffles which blocks out the direct sunlight from the sun itself. So what we’re looking at is the solar atmosphere, which is 10 to 12 orders of magnitude dimmer than the surface of the sun. So and we’re looking very close to the surface of the sun. We’re only looking five degrees off from the sun. So we really have to block out that very bright solar light using this set of highly specialized baffles.

Tom Temin: So the baffles with the mechanical equivalent of squinting, basically, for this camera?

Robin Colaninno: it’s a similar to holding your hand up over something bright, a bright light to be able to see past that bright light.

Tom Temin: We’re speaking with Dr. Robin Colaninno. She’s an astrophysicist at the Naval Research Laboratory. And what part of the spectrum does this camera see? It’s not visible light, is it?

Robin Colaninno: Yes, actually, it is visible light. So it’s a very broad range of visible light from blue to red, very similar to what you would actually see with the naked eye were you to be out in space. But it’s a black and white image, so we’re only taking — it’s integrated over all the colors.

Tom Temin: Got it. And the satellite itself, how close to the sun is it going? What’s its path?

Robin Colaninno: So we launched from Cape Canaveral on Feb. 9, and we’re headed actually to Venus first. So we’ll use Venus to assist in getting into our orbit. Gravity from Venus will get us closer to the sun. Ultimately will be at 0.2 [astronomical units], which means that we’re 28% closer to the sun — percent of the sun from Earth. And that’s 26 million miles, which seems like a long way. But it’s actually quite, very close. We’re inside the orbit of Mercury, and will be the second-closest human object towards the sun.

Tom Temin: Wow. So there must be a lot of heat protection, too, for this whole apparatus?

Robin Colaninno: That’s correct. So the entire spacecraft is behind a titanium shield. It’s called the heat shield, and it is covered in a special paint that was developed by the European Space Agency called Solar Black, specifically for this mission. Then there are little holes in the spacecraft that allow the other imaging instruments to look at the sun and image.

Tom Temin: And how will you handle the data? Will this be a continuous downstream of data coming from a satellite, or will you get periodic snapshots as it were?

Robin Colaninno: So we’ll get periodic snapshots. This is a very interesting mission in that it’s much more similar to a planetary mission where you have an encounter, and then you get that data back from the encounter, so we’ll have science observing period. That’ll be 30 days long after the satellite gets back into a better position to transmit that data back down to Earth. Then we’ll get that data after the science observing periods every six months.

Tom Temin: Yes, I guess you need kind of a long base of data in order to really have some sense of the cycles of the weather, the solar weather?

Robin Colaninno: That’s correct. So the sun has an 11-year cycle where it goes from very low activity to very high activity and with a baseline of seven years of the mission, will see both parts of that cycle. So we’ll see. Right now, the sun’s in a very low activity state. As the mission gets closer to the sun, the activity will increase and we’ll see kind of the lifecycle of the solar activity.

Tom Temin: And the black and white images that are coming down — does it take any particular high bandwith types of processing to receive and handle, or how big are the files?

Robin Colaninno: Files are fairly large. We they’re 4,000 pixels by 4,000 pixels. So it’s a pretty big format. You’d need a super high definition television to actually look at them in their native format. And so ESA will downlink the data from the spacecraft. And then that will get transmitted to us and then we’ll process the data here at the Naval Research Laboratory, calibrate it and then make it available to the public.

Tom Temin: And what is the status now? Has the spacecraft reached the celestial Wawa of Venus? Or is it still headed there to take the swing?

Tom Temin: So you have just a few days to go, then, before you actually get pictures?

Robin Colaninno: We’ll get pictures of the back of our door, unfortunately. We’re going to turn it on, we’ll evaluate the health of the instrument, and then in probably in a year we’ll actually get our first light data.

Tom Temin: So you’re on pins and needles until then, huh?

Robin Colaninno: Yes, we are.

Tom Temin: Well, good luck. Robin Colaninno is astrophysicist at the Naval Research Laboratory. Thanks so much for joining me.

Robin Colaninno: Thank you, very nice to talk to you.

Tom Temin: We’ll post this interview along with a link to more information at www.federalnewsnetwork.com/FederalDrive. Hear the Federal Drive on demand and on your device. Subscribe at Apple Podcasts or Podcastone. 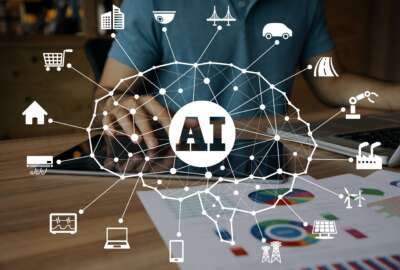 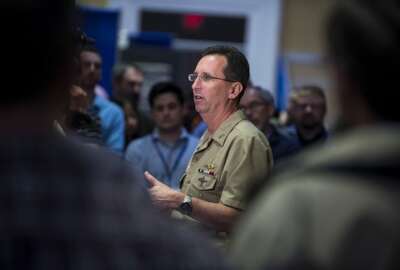