The Office of Personnel Management chipped away at its growing inventory of retirement claims in March, thanks to the low volume of new claims it received this month. But the agency still faces an uphill battle in reducing the backlog it worked hard to manage late last year.

OPM received 5,741 new retirement claims in March — a 49 percent decrease from what it had received in February, and the fourth lowest volume of new claims in a given month since October 2014.

The decreased workload allowed OPM to cut its backlog down to 19,211 claims, a 15 percent reduction since last month. Its inventory now stands at its sixth highest point in the past 18 months.

February’s numbers reflected the surge in claims received in January, typically the month that most federal employees file for retirement.

“Every year, OPM sees a surge of cases in January and February that adds to the number of cases awaiting finalization. However, what the reporting shows us is that those numbers dwindle and more importantly, that OPM is now processing a large number of those — 88 percent — within 60 days or less and that on average, many of those are completed within 44 days,” Snell said. “This is a great improvement in service to new retirees since 2013 when it was taking OPM 6 months of more to finalize retirements and there truly was a backlog — e.g. a large number of old claims waiting to be worked on.” 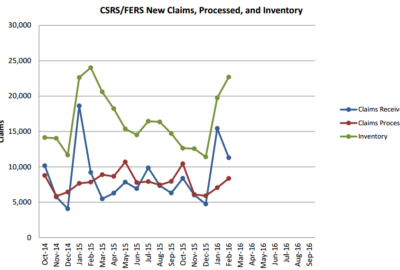