The generals, admirals and foot soldiers tend to get all the attention, glory and recognition when it comes to the Defense Department. But the latest set of winners of the Presidential Rank Awards of Distinguished Executives and Distinguished Senior Professionals might just change that narrative.

DoD civilian employees earned 16 honors, more than any other agency, and like all winners continue to show the breadth, depth and expertise of federal employees. 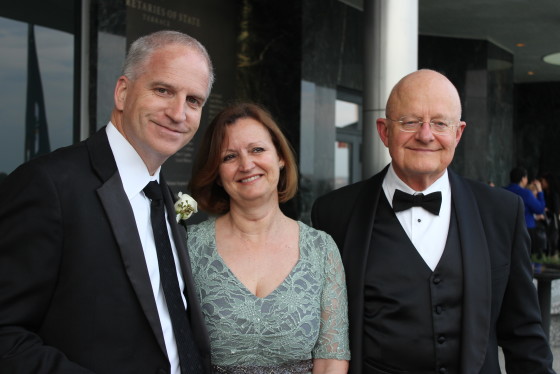 The Senior Executives Association honored 43 recipients of the 2015 Presidential Rank Awards at a banquet in Washington April 21. The winners were responsible for saving government more than $121 billion. Director of National Intelligence James Clapper gave the keynote speech.

Dr. Peter Reynolds, a senior research scientist of physical sciences at the Army Research Lab, is one such person.

Reynolds led an effort that will impact the world atomic clocks. He designed and led programs that resulted in the creation of exotic new forms of matter at ultra-cold temperatures, millions of times colder than outer space.

Reynolds’ work on quantum Monte Carlo provided a novel method for highly precise computation of electronic structure of molecules and materials, exceeding the precision of all previous tools.

Then there is John Nerger, the executive deputy to the commanding general at the Army Materiel Command. He leads a mostly civilian workforce that includes two-thirds of the Army’s engineers, scientists and contract experts, who oversees 170,000 contract actions annually valued at over $50 billion, about 15 percent of the total spent on contracts by the entire government.

Among his accomplishments, Nerger brought back 44,000 vehicles and 107,000 equipment containers from Afghanistan, which is helping the Army preserve about $30 billion worth of equipment for future use.

These are just two of the 43 extraordinary federal employees that the Senior Executives Service recognized April 21 at the annual dinner and celebration at the State Department. All combined, these civilian federal employees saved the government more than $121 billion in 2015.

“The journeys each of these individuals take is awesome,” said James Clapper, the director of National Intelligence, who served as the guest speaker at the event. “The breadth and scope of their accomplishments is eye opening. I’ve traveled all over the world and no other country comes close to the caliber of people in our federal service.”

The 30th annual Presidential Rank Awards of Distinguished Executive and Distinguished Senior Professional highlight outstanding career federal employees for their achievements over the last year and throughout their career.

Along with the 16 executives from the Defense Department, there were five from the Energy Department, four from the Justice Department and three from the Homeland Security Department, while the departments of State, Commerce, Interior and many other agencies were well represented.

“This is rare public distinction and very tough to push through the White House,” Clapper said.

This is the second year since the White House suspended the awards in 2013 because of budget concerns.

One common theme across several honorees was acquisition. The executives managed large projects, brought in billions in savings or cost avoidance, and accomplished remarkable goals.

Shay Assad, the director of Defense Pricing, Defense Procurement and Acquisition Policy, led an effort to save $1 billion through the Joint Strike Fighter “should cost review” effort and negotiation of subsequent lots. He also developed and implemented throughout DoD a peer review process which requires cross-service critical reviews of all contracts with an estimated value of $1 billion or more. In 2012, the review threshold requirement was lowered to $500 million.

Richard Hartley, the assistant deputy chief of staff of the Air Force for Strategic Plans and Requirements, led the highest ever Air Force acquisition portfolio probability of success, with cost growth risk down $19 billion across an $87 billion portfolio, a 90 percent decline in five years.

Aside from acquisition, several winners touched citizens in new or better ways.

Nancy Berryhill, the deputy commissioner for operations at the Social Security Administration, led the development and implementation of the my Social Security portal, letting citizens more easily find and apply for services while also protecting their identities.

Dr. John Butler, a fellow with the National Institute of Standards and Technology in the Department of Commerce, created a new way to conduct DNA analysis. This approach focuses on short tandem repeat markers has been adopted internationally by the law enforcement, legal and defense communities and his research has led to the world wide acceleration and automation of the DNA testing process, transforming forensic DNA in to a powerful and accessible tool.

Dr. Elizabeth Southerland, the director of the Office of Science and Technology in the Office of Water at the Environmental Protection Agency, created a new national bacteria water criteria to lower human health risks from swimming in the nation’s beaches.

“These executives demonstrated long-term results, demonstrated the strength and integrity to get the job done,” Clapper said. “We are surrounded by bright and talented people who are committed to service.”