I’ll be listening to the President for jobs ideas

Everything hurts a little. I’ve just embarked on a new workout routine. It involves standing on an inflated rubber hemisphere about two feet across while handling little colorful dumbbells. I hope my usual companions over in the free-weight section aren’t laughing.

Basically I’m constantly wobbling to keep from stumbling off the half-ball, known as a Bosu. That’s the name the company Hedstrom Fitness has given the gadget. It’s web site touts that this conglomeration of rubber and molded hard plastic is made right here in the United States, in tiny Ashland, Ohio.

I’m not certain whether the Bosu is a fad or the salvation of the flabby American midsection, but it is satisfying to see something like that made in the U.S.A. The company seems to be selling a lot of them. My gym has racks stacked high with the bright blue Bosus. 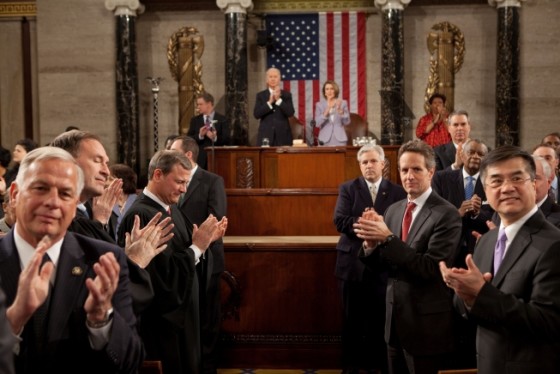 State of the Union: Night of pomp and ceremony

This gallery includes official White House photos taken at President Barack Obama’s earlier State of the Union addresses, capturing some of the emotion, ceremony and sense of history surrounding the annual event.

Like many Americans, I try to buy “Made in the USA,” but it’s not easy. I confess we have a German and a Japanese car, although the latter is assembled in Indiana.

So tonight, I’ll be listening to see what President Barack Obama has to say about job creation. I expect that will be part of the State of the Union speech. One thing Democrats and Republicans agree on is that good manufacturing jobs are crucial to a strong economy. Bosu is nowhere on the scale of, say, Tesla, but then neither is it the recipient of federal largesse. Everyone who buys a Tesla get a $7,500 federal tax credit. That would translate to about ten bucks off the price of a Bosu. Still, the Tesla was designed and is assembled in the U.S., as are lots of high-value items — G.E. jet engines, Harley Davidson motorcycles, Steinway pianos.

Last year I bought two sport jackets made in the U.S. Okay, Canada, but not China or Indonesia.

Last week I spoke with Jay Williams, the assistant secretary of the Commerce Department. He runs the Economic Development Administration. (The interview will be featured in an upcoming Federal Drive.) Although a generation apart, we were both born in Ohio Rust Belt cities — me in Cleveland, Williams in Youngstown. In fact, he was mayor of Youngstown for a term. We talked about companies from America’s great metalworking past such as Youngstown Sheet and Tube, Jones & Laughlin Steel. We both know the difference between welded and extruded tube; and between ore reduced in blast furnaces burning coke, and No. 1 Heavy Melt scrap repurposed  in electric ovens.

Williams’ small agency helps distressed areas re-establish themselves with match grants and educational training funds. Green shoots of renewal have helped former basket cases like Cleveland, Youngstown, Pittsburgh, Wheeling, and Detroit. The federal government has had a role in many instances. My sense is local politicians can do more, with items like re-zoning, better schools, and curbing their own expenses and therefore their tax takes.

Like President Obama, I’m optimistic that manufacturing can surge in the U.S., whether it’s reusable space rockets or rubber fitness balls. The government doesn’t create jobs, but it can enhance the conditions that enable them to grow.