Outside my studio window, I see the flip-flopped, T-shirted, uptown, $5 iced coffee drinkers, seemingly carefree in the classic D.C. heat. This one is poking at his iPhone. That one stoops to pick up her dog’s poop.

On my screens inside, I’m looking at a picture of Marines moving along suspended ropes during a jungle endurance exercise in Okinawa. They’re in full uniform, rifle strapped in front and a backpack. No iced chai lattes for them. Having ridden home in stop-and-go traffic yesterday’s 95-degree heat, schvitzing in heavy motorcycle jacket, helmet and boots, I sympathize with those Marines.

For military services members, work means all-the-gear, all-the-time. Sometimes that gear can weigh more than 80 pounds. Besides the sheer discomfort, it brings added strain on joints and a drag on mobility. Sometimes they can barely climb in an out of armored vehicles.

Military planners are aware of the load bearing issues. Initiatives such as exoskeletal support systems attest to this. But a young civilian engineer, just a few years out of college, took a more basic approach. Flora Jordan works for the Armor and Load Bearing Team at the Marine Corps Systems Command. She figured out a way to take tens of pounds off of what Marines have to schlep.

You’ve heard of agile software development? Jordan took an agile approach to re-designing body armor. She talked with users, made prototypes, test them on real people, and repeated until she got it right — in the users’ view. Jordan is one of the finalists for a Service to America Medal this year. In her write up at the Partnership for Public Service, we learn she traveled thousands of miles and interviewed 600 Marines in a variety of commands and physical situations. She wore the stuff herself, going on training marches to see where it chafed or hung too loosely.

In my interview, Jordan explains how she coupled the re-design with use of more up-to-date materials that have equal ballistic capabilities at lower poundage.

I read once that early in the Civil War, the War Department issued boots undifferentiated between the left foot and the right. It adapted. Military history has many stories of this sort of improvement. Unpalatable C-rations gave way to M.R.E.s you’d be happy to take on a camping trip. Often its a passionate individual driving change. Former Navy Capt. Mike Abrashoff made a post-service consulting career over having transformed the worst performing ship to the best. Among the long list improvements: listening to suggestions from the sailors. I once had him as a guest speaker at an event. One anecdote I remember clearly. He spent some of the captain’s discretionary funds on stainless steel fasteners and eyes, different metal bits. The old ones were constantly rusting, forcing sailors to spend endless hours on the dreary task of dabbing paint.

Anyhow, after final testing, the Marine Corps Systems Command is ready to adopt the new armor. Of course that depends on funding.

Some improvements in government take engineers, not lawyers.

Phooey, the FBI stays down in the dumps 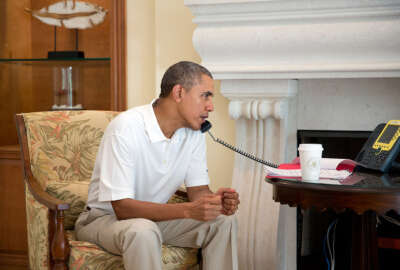 A short history of the ‘Obamaphone’