Where is federal tech headed? Money points the way

Sometimes the best indicators of future technology come from where supposedly smart money places its bets. If that’s the case, the federal technology market will be about cloud computing; robotics and security, both physical and cyber; next-generation weapons; and unmanned systems.

No eye-popping surprises, but these technologies are moving markets.  A lot of money has moved in recent days.

Yesterday the Science Applications International Corporation (SAIC) said it would buy the federal business from Unisys for $1.2 billion in cash. Unisys (note that I occasionally do freelance writing for Unisys Federal) has expertise in cloud services brokering and migration, and IT-as-a-service that SAIC cited. Unisys has several federal customers already, but will retain its non-federal public sector business.

In its own press release, Unisys corporate made it clear, it needs the cash to settle debt and strengthen its balance sheet.

Companies always say these things, but SAIC is really pressing what it calls an “accretive, strategic and value creating transaction.”

The transaction shows how cloud computing has matured as a business. Amazon and Microsoft have grown to dominate direct cloud services, with Google, IBM, Oracle and a few others having a solid presence. But many clients, including federal agencies, are obtaining services from these primary providers using middlemen. The middlemen broker among clouds, and do the application modernization, DevOps, and infrastructure upgrades necessary for successful cloud migrations.

Cloud migration is easy to say and difficult to do. Agencies need a lot of technical help and simply have to pay for it.

Harris Corporation also sold a big piece of its business. Just a couple of days before the SAIC-Unisys deal, Leidos — already on a buying spree — agree to take over Harris’s security detection and automation businesses. This is also a billion-dollar, mostly cash deal. In both cases, the buying companies paid roughly twice the revenues of the business they bought.

It involves services and hardware, like those “tray return systems” used in high-volume screening situations.

The Harris buy itself came only days after Leidos agreed to acquire technology company Dynetics for $1.65 billion in cash. Dynetics has an interesting portfolio of capabilities that fall roughly into two categories — seeing things and hitting things.

It has a cybersecurity business. It also has a unit developing hypersonic projectile systems. Russia recently claimed it’s developed a missile that can go seven times the speed of sound. At that velocity, a missile doesn’t have to explode. Just the speed will wreck whatever it hits. The U.S. Defense Department has also named hypersonics as a capability it wants. Dynetics says it’s producing 20 “glide body assemblies” for the Army, Navy and Missile Defense Agency.

An interesting twist in these acquisition, for those who follow corporate geneology, is that Leidos and SAIC were once the same company. In 2013 it split, spinning out Leidos and, in effect, relaunching SAIC with a new board.

Besides projectiles that go really fast, the government is looking at all things robotic or autonomous. The the premium on the small companies doing this work. Giant Huntington Ingalls Industries — maker of heavy Navy and Coast Guard ships — will acquire Hydroid, a wonderfully-named company in Pocasset, Massachusetts. It makes marine robots that look like submarines the length of a rowboat.

Right now Hydroid is owned by the Norwegian company Konsberg. Operating under Huntington-Ingalls will give it a lower-friction way of expanding sales to the U.S. military. And it will bring H-I expertise in the types of systems that will eventually operate on surface vessels.

The federal contractor world is one of ceaseless mergers and acquisitions. But the transactions often give a clear view of what’s ahead. 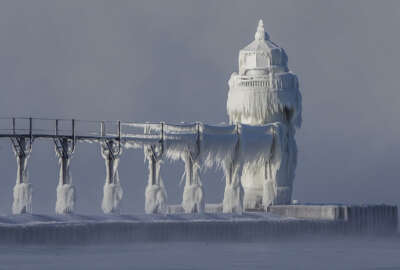 Mr. Senator, tear down this hold!