(No-longer-beta) SAM.gov gets a qualified B+

I made it home yesterday afternoon just before the street paving apparatus reached the end of my driveway. The boy still in me just had to stop and watch the ballet of men and loud machinery required to rehabilitate the streets in my neighborhood. As a seven-year-old, I watched for hours as gigantic graders created a football field for a new high school in the 1960s.

I understand how a dump truck works. And a steamroller. But the huge piece of equipment in the middle of the elephantine parade, not so much. It was a Blaw-Knox street paver. The dump truck emptied asphalt into one end. The machine ingested the hot, black mixture and left pavement in its wake, to be compressed by the roller. But what goes on inside the loud, complicated paver is hard to tell.

In some ways, the federal acquisition system is like that paver. Money in one end, contracts out the other. I’ve followed it for many years. But like many a sports writer, I’ve never played.

To my untrained eye, though, the new SAM.gov works pretty well. This week the General Services Administration completed the integration of several acquisition-related online services into a unified portal. SAM stands for System for Award Management. It’s been a long time in the making.

SAM.gov is a professional site. That is, it is a site for those already versed in the intricacies of federal procurement, a deeply bureaucratic and arcane activity with norms and vocabularies all its own. If you’re a beginner, perhaps one of those innovative non-contractors that agencies might want to do business with, you’d need to spend considerable time understanding the internal architecture of the $500 billion contracting machine.

Still, the new SAM.gov shows real effort. It’s easy to navigate. The pages load fast. The look is clean and contemporary. It lets viewers know the legacy sites from which information is derived, such as fbo.gov or wdol.gov. You might need your local data scientists to tell you what data you need, but data sources aren’t hard to find in SAM.

In a short blog post, GSA’s Jared Davidson directed users with questions to a knowledge base site.

To some degree, you need to know what you’re looking for. For example, the NIH IT Acquisition and Assessment Center just released the solicitation for its new governmentwide acquisition contract. In the new Contract Opportunities site, if you search “NITAAC,” sure enough, the package comes up.  But if you type “NITAAC” into the search box on the Federal Hierarchy section, you get “no matches found.” A reminder that SAM amalgamates many once-separate sites, and the refinement will continue.

Accessing details of a solicitation requires the user to download documents in zipped files. To some degree this is outside of GSA’s control, but I’d rather have agencies maintain online viewable packages. In the meantime, downloading and then managing Word and Excel files remain burdens of doing business with the government.

GSA is promising continuous notices of updates and performance improvements to SAM.gov. There’s also a green Feedback button at the bottom of the home page. It opens a box into which you can type what you think of the site. My hunch is GSA would like to hear from you. 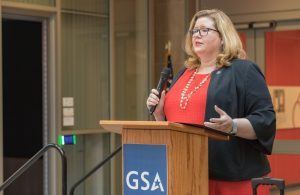