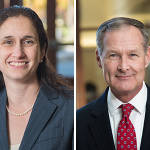 The Army is in a pickle. Given the budget constraints put on it by the Congress, and the mission requirements by the administration, it’s facing a situation where the blanket doesn’t cover the bed. Something’s got to change. That’s the topic of a detailed study by two top military analysts. Nora Bensahel is distinguished scholar in residence at American University. Retired lieutenant General David Barno is distinguished practitioner there. They’ve coauthored The Future of the Army, published by the Atlantic Council. First, Bensahel describes the Army’s situation.

For the better part of 15 years, the Army has canceled and otherwise dis-invested in new technologies and capabilities. That means its soldiers work with old equipment and capabilities increasingly matched by potential adversaries. Military analysts Nora Bensahel, distinguished scholar in residence at American University, and Retired lieutenant General David Barno, distinguished practitioner, coauthored The Future of the Army, published by the Atlantic Council. They described the situation in detail.