Master Chief Jonathan Towne spent the hours before his first presidential inauguration parade as the U.S Coast Guard Band drum major, in a hotel hallway, practicing his marching cues on the patterned carpet.

This year might not include rookie jitters, but as the last inauguration  — his eighth! — for the retiring clarinet player, perhaps an appreciation for one last march down Pennsylvania Avenue.

“There’s not a more important parade that you do than the inaugural parade,” said Towne, 60, in a phone interview with Federal News Radio. “It’s always great, despite whatever the weather is, it’s just such a rush when you’re going in front of the reviewing stand. I get to salute the president, everybody else is playing, but my head is turned at a 45-degree angle, looking at the president, saluting, and it’s really great.”

Towne will make his way down from his home in New London, Connecticut — also home to the U.S. Coast Guard Academy —  this week, to lead the band for the 58th Presidential Inauguration. The parade comes in the middle of his 28th year with the band. He’s allowed to serve in the Coast Guard for 30 years.

The parade is divided into five sections, with a premier military band leading each section. The official order is Army, Marines, Navy, Air Force, and the Coast Guard bringing up the rear. Towne’s job as drum major is to lead the band in the parade. Armed with a mace stick and towering bearskin hat, the 6-foot-2 Towne, who is also a clarinet player when he’s not marching, is an easy figure to spot from any row in the band.

Insight by Equinix: Learn how DIA and NSA create a secure and flexible infrastructure to use AI and machine learning tools in this free webinar.

Serving as the drum major for the U.S. Coast Guard Band didn’t so much fall into Towne’s lap, as the bearskin hat and mace were thrust into his hands. About 25 years ago, Towne, a still fairly new member of the band at the time, was practicing clarinet in the band’s practice room when he was approached by the outgoing assistant drum major about any interest in the position. 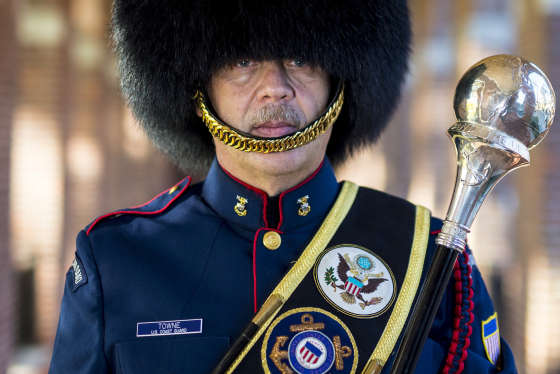 Master Chief Jonathan Towne, the U.S Coast Guard Band drum major, prepares for his eighth presidential inauguration parade. He will be retiring after 28 years with the band.

Answering that he hadn’t thought much about it, the assistant drum major walked Towne down to the director’s office, where he proudly announced that Towne had volunteered for the role.

“You know, I’m really glad he did that,” Towne laughed. “I really am glad he did have that confidence in me to do it. At that point, I was a pretty junior member in the band and there I was out leading the band. It was a little uncomfortable at first, but like anything, you do it enough you get used to it. Then it becomes a little bit easier to do.”

Towne said his first inauguration as drum major, he mostly remembers being hyper-focused and when to cross a particular line across from the presidential viewing tent, which organizers had said would be the place to render honors.

“[Before the parade] I was actually in the hotel hallway outside my room, practicing giving the signals so the front row which was just three steps behind me would actually start playing honors right when they hit a certain part in the carpet that I was going over,” Towne said.

Towne was born just north of Boston, Massachusetts, to parents who sang in church choirs and played classical music at home.

He decided to try out the clarinet since his father had also played when he was a young boy. Towne said he keeps the metal clarinet — which was much more affordable in the 1940s than the wooden ones — that his father played, on his office wall as a tribute.

He grew up in Pittsfield, Massachusetts, which is near Tanglewood Music Center, the summer home of the Boston Symphony Orchestra.

Towne said he tried teaching for a bit, but realized it wasn’t for him.

That’s when he decided to try out for the Coast Guard band. When Towne auditioned more than 28 years ago, he first had to send in a cassette tape with a recording of a piece and wait to hear whether the band thought he was up to their standards of playing.

Towne said he couldn’t remember the specific piece he played, but it was probably something from a recent recital he had given; a classical piece.

“I did send one of the better performances that I had,” he added.

Towne received, in return, a list of audition material he would be required to play in person for the band’s recruiters. The list was a mix of material he knew, some he didn’t, as well as orchestral excerpts and some ensemble playing.

“They wanted me to play the clarinet part with four other Coast Guard band musicians, so then they can see how the ensemble is, how the intonation is, the blending of the sound with the group,” Towne said. “Then there’s always some sight reading. The actual audition is pretty intense, it’s really like auditioning for a professional orchestra; you just have to have the best day, better than anybody else’s.”

That fateful audition in 1988 would secure Towne a spot with the band, and about five months later, he found himself in one of the back rows of the band, with his clarinet, marching in the inauguration parade for former President George H. W. Bush.

Towne said he didn’t realize the band played in the inauguration parade — it has since Herbert Hoover’s administration in 1929 — though he’d traveled to Washington, D.C. for other concerts and Coast Guard events.

Towne said he remembers being proud after finding out he got to march in the parade, but looking back at that first inauguration, it’s the wind that stands out most in his memory.

“Having to hold onto my cover on my hat, seeing lots of military covers blowing down the street that people have lost,” Towne said with a chuckle. “It was just really, really amazingly windy for that one.”

Towne is the highest ranking enlisted person in the Coast Guard Band, and has served longer than any current member, said the band’s director Lt. Cmdr. Adam Williamson, in a statement to Federal News Radio.

“His incredible experience with major events that attract world-wide audiences, like the presidential inaugurations, has been truly invaluable to the Coast Guard Band,” Williamson said. “He also happens to be a fantastic clarinetist and a wonderful musician who continues to perform at an exceptionally high level.”

On inauguration day, the band’s day, like most of the other performers in the parade, starts early, Towne said, and includes a lot of waiting around and shuttling from one security outpost to another.

The weather often isn’t cooperating, and if the parade isn’t on time — which is usually the case — the band could be stepping off after the sun at set. Weather aside, Towne said when it comes to his last parade as drum major, he just hopes that the day goes smoothly.

“You get to the reviewing stand, the lights are amazingly bright. Then the president’s there, the commandant of the Coast Guard is there, the vice president is there, everybody’s right there, that’s the important part,” Towne said. “You turn right by the Treasury building, onto Pennsylvania Avenue, then all of a sudden just all the cameras and all the lights. It’s really pretty amazing.”