A member of the Senate Finance Committee has introduced a bill that would exempt the Internal Revenue Service from unionizing.

“My legislation will help end the partisan culture at the IRS by exempting the agency from labor organization and collective bargaining requirements. We should put the 200-plus employees currently doing union work back to serving the American taxpayers, not their union bosses and the politicians they support,” Scott said in a statement announcing the legislation.

“Unionization has led to hundreds of employees working solely on union issues instead of serving the American people,” Scott said.

IRS employees, he said, should instead focus their time on improving the agency’s level of customer service, which was officially the worst since 2001, according to the National Taxpayer Advocate Nina Olson.

From Jan. 1 to April 13, call center operators only answered 37 percent of taxpayers’ calls with questions about the upcoming tax filing season, Olson said. Scott said the IRS hung up on more than 9 million callers.

Scott claims IRS employees spent more than 600,000 hours of official time on union duties in 2011. Under official time, agencies allow their employees to perform union-related work in lieu of their regularly assigned work.

The Federal Service Labor-Management Relations Statute already prohibits organized labor at a number of agencies, including the Government Accountability Office, Secret Service, FBI and CIA. Presidents can add agencies to the list at their discretion.

NTEU National President Tony Reardon in a statement warned that Scott’s bill would take away “long-held rights from front-line federal employees,” when they were not the ones at fault regarding the agency’s treatment of conservative groups that applied for tax-exempt status in 2009 and 2010.

“It makes no sense to punish rank-and-file employees at the IRS by taking away their workplace rights and leaving them with no protection against retaliation or other potential management abuses when they did nothing wrong,” Reardon said.

Scott’s bill comes as the latest salvo against the IRS. In October, House Oversight and Government Reform Committee Chairman Jason Chaffetz (R-Utah), along with 18 members of his committee, introduced a resolution  calling for IRS Commissioner John Koskinen’s impeachment. 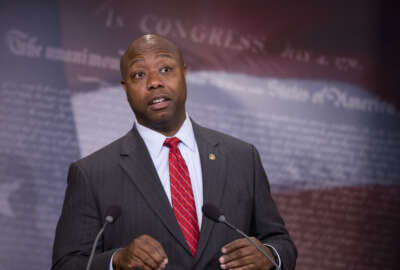