The National Treasury Employees Union (NTEU) picketed outside the Departent of Health and Human Services headquarters Thursday afternoon in an effort to raise awareness about a growing stalemate between the union and agency management.

HHS has declared an impasse after the department and NTEU met briefly over the summer to review the agency’s bargaining proposals for a new contract.

NTEU has said it approached HHS about reopening its contract back in July 2015. The two parties spent two years negotiating the ground rules for contract discussions but couldn’t agree.  The union took the case to the Federal Service Impasses Panel, a body of presidentially-appointed members who resolve labor-management disputes. The panel imposed ground rules on HHS and NTEU, but the union said the negotiation process stalled.

NTEU offered up its own proposals this summer. Both parties have met a few times briefly in July before HHS made a final offer, according to the union. When the parties couldn’t agree, another impasse was declared.

HHS has said their proposals do not mean that the agency is cutting back on telework or transit subsidies.

But for NTEU, cutting articles on those topics out of their bargaining contract would make it easier for the agency to make changes to these programs without working with the union first.

“Telework is a big one,” Goggans said. “Employees really value that, especially with a workforce that’s so spread out. The fact that you could be home doing the exact same work without the stress or time lost to the government by commuting, they don’t get that. They see that as some special privilege versus something that adds to the bottom line of productivity for the government. We do better work when we have a balance with our work and our li[ves].”

Several members of Congress have spoken out about the situation at HHS. Seventeen Democrats on the House Education and Workforce Committee wrote to HHS Secretary Alex Azar earlier this month expressing their concerns.

“You are the proverbial test case,” she said. “They are using the HHS workers … as a test case to take down collective bargaining altogether in the federal sector.”

NTEU President Tony Reardon said he’s written to Azar and tried to discuss the matter with him in person but hasn’t received a response. 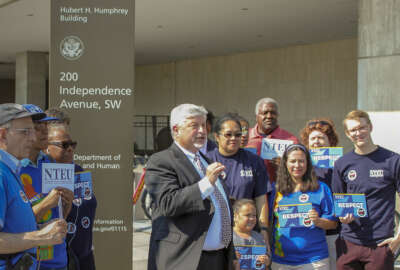