This story has been updated Friday, Feb. 16 at 7 p.m., to reflect the naming of a new VA chief of staff.

The findings, which VA Inspector General Michael Missal detailed in a report Wednesday, faulted VA Secretary David Shulkin for improperly mixing government work and sightseeing during an 11-day trip to Europe last summer. Shulkin’s staff lied to justify his wife accompanying him on the trip, and Wright Simpson altered emails to make it appear that the secretary had received an award to defend his trip, the IG said.

Peter O’Rourke, the director of VA’s new Office of Accountability and Whistleblower Protection, will serve as VA’s permanent chief of staff, the department’s spokesman, Curt Cashour, said in a statement.

O’Rourke will continue to lead the department’s Office of Accountability of Whistleblower Protection until VA names a replacement and will ensure “the department works closely with the White House going forward,” Cashour added.

Shulkin said Thursday morning that someone had hacked into Wright Simpson’s email account and said those allegations were “concerning.”

“We have found that somebody has taken over the chief of staff’s email and is sending emails as if it’s her,” he told reporters after Thursday’s hearing.

VA said Friday afternoon it would open a formal investigation into Wright Simpson’s actions as described in the IG report.

“Separately, VA announced that it has opened an investigation into allegations of email hacking,” Cashour said in a statement. “To be clear, while VA is still currently investigating these hacking allegations, we have thus far found no credible or conclusive evidence of a compromise to our email system or a user’s account.”

According to Walz’s letter, Wright Simpson denied having altered the emails and showed Shulkin evidence to support her claims.

Both Walz and House VA Committee Chairman Phil Roe (R-Tenn.) said they were disappointed with the IG report’s findings, but neither member spent much time on the topic during a Thursday morning VA budget hearing.

Shulkin said he reimbursed the U.S. Treasury for his wife’s travel expenses and Wimbledon tickets.

“I do regret the decisions that have been made that have taken the focus off [this] important work,” he told the House Veterans Affairs Committee. “That’s why I’m here. I know that’s why all of you are here. We care deeply about this subject, and it’s the reason why, to keep the attention focused on the important things, that I’ve made the decision to reimburse the Treasury, to follow the IG recommendations, and I’m committed to doing what we have to do to focus on veterans and make this better.” 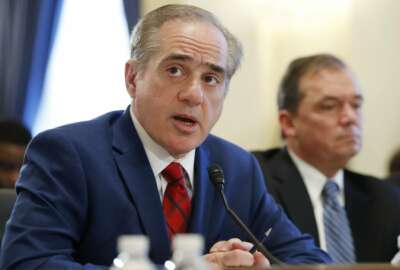